“Steampunk dungeon crawler?” I’ll buy that for a dollar

Sorry, I couldn’t resist an easy Robocop reference. I guess it shows my age that I’d quote Robocop, but still, it’s a great headline, okay? You know what also looks great? Vaporum, a new dungeon crawler that’s coming to us from Merge Games.


Claiming to be inspired by the likes of the nostalgic Eye of the Beholder, and the more recent Legend of Grimrock, Vaporum is a real-time, grid-based crawler, and thanks to that Steampunk theme, it looks like something spawned off Bioshock.

This one is already available on PC, and has a pretty respectable user rating (not that those are worth anything). Now it’s coming to console, and will release on PlayStation 4 (April 9), Xbox One (April 10), and Nintendo Switch (April 11). The big question is whether it can topple Hyakki Castle as the best example of this particular genre in recent years? I certainly hope so. I love me a good crawl.

The Sinking City gets pushed back, and I’m peeved at why

The Sinking City, another game based on Lovecraft’s Cthulhu mythos, is a title I’ve been looking forward to for months. It’s developed by Frogwares, the same folks who make the Sherlock Holmes series. But the title, originally supposed to be out later this month, has been delayed. Here’s the video explaining why:

Essentially, the publisher and developer feel that too many AAA titles are being released this month, so the decision has been made to delay it. I shouldn’t be upset, as it is likely a sound business decision, but unlike others who are looking forward to these superstar titles, all I has been looking forward to playing this month was The Sinking City.

The game will now be released on June 27 for PC, PlayStation 4, and Xbox One.

The next Octopath Traveler is going to be a mobile game

Octopath Traveler is one of the greatest delights available on the Nintendo Switch. The blend of superb, modern gameplay, a rich narrative, and the most gorgeous 2D sprite work you’ll ever see, the game was a big success for Square Enix, so naturally fans were looking forward to seeing what might come next. Now we know. It’s going to be a mobile game.


Octopath Traveler: Champions of the Continent releases in 2019 in Japan (no western release at this stage). It’s being pitched to players as a “free-to-play single player JRPG”, which might hopefully resolve some of the issues with many F2P games, in that they monetise by preferencing multiplayer action to narrative and storytelling. Square Enix won’t be able to get away with that this time around.

You’ll be able to command up to eight heroes in battle. Otherwise the game looks like it has much the same style and approach as its predecessor, and indeed the game itself will be a prequel to the events of that game. Hopefully, as we wait for the next “proper” Octopath Traveler, we can use this game to learn more about the world and lore.

If you’re a huge fan of Gust’s Atelier series, this news is for you! Pre-orders are now live on the NIS America website for the Limited Edition of Atelier Lulua: The Scion of Arland. 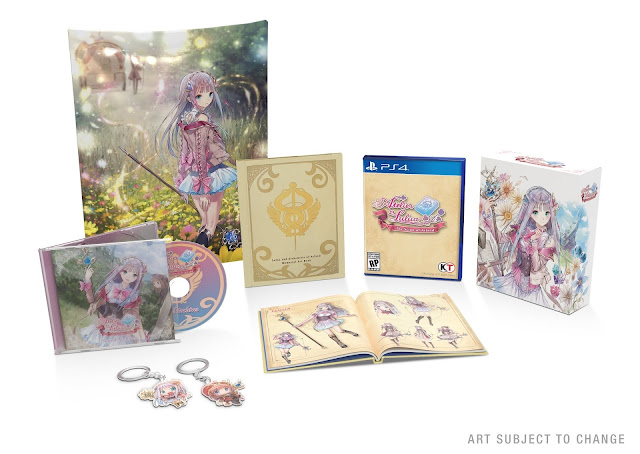 The Limited Edition includes a physical copy of the game, a hardcover art book, soundtrack on CD, cloth poster, two keychains, and a collector’s box.

Atelier Lulua: The Scion of Arland will be released on March 20 in Japan for the Nintendo Switch and PlayStation 4. North America and Europe also get the game on PC; North America’s release date is May 21 and Europe’s is May 24.