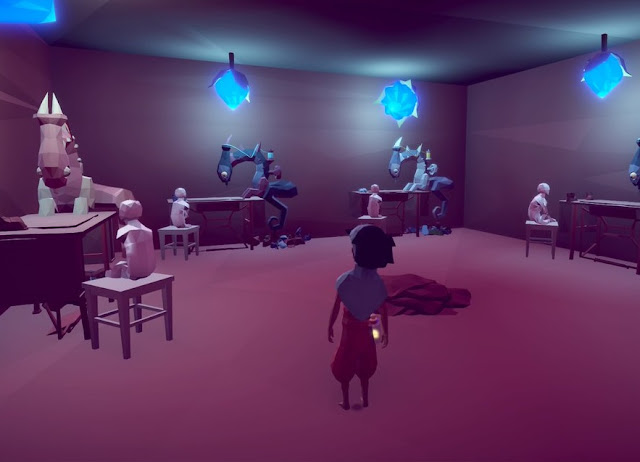 Massira is one of the more difficult games that I’ve had to put words to. On the one hand games like this one are important. Massira takes a very somber look at the plight of refugees from war-torn Syria, and as long-term DDNet readers will be well aware, I’m of the mind that the whole “games as art” spiel really rests of the ability for game developers to stop tackling “fun” topics, and do something with meaning and impact. Massira does achieve that.

On the other hand, it’s really not a very good game at all. I’m happy to tolerate far-less-than-perfect when the concept is strong and potent enough, but I have my limits as everyone else, and Massira’s combination of janky platforming and uninspired puzzles that are centered around the teamwork of the two protagonists (a grandmother and a little girl) made it too hard to emotionally invest in what is otherwise a highly evocative narrative.

First, the platforming. Massira features a number of sequences where you have to jump from platform to platform, and often these platforms are very thin. These sequences feel a little like they were carved from the PlayStation 2 era. They’re arbitrary, in that the just appear in the landscape without having any particular environmental reason for being there, and they’re let down by your avatar being far too “floaty” in the air. Worse are the platforming sequences that add something extra to the mix. For example, in one instance, I needed to use giant mushrooms (which, again for arbitrary reasons, were scattered all over town without any explanation as to why they are there) to spring from one rooftop to another. Unfortunately the springing mechanic was so leaden that timing jumps was never comfortable, and I wasted a lot of time trying to simply navigate around and cursing when my character, who should be making massive bounces in the air, simply came to a stop.


Secondly, the puzzles. Most of Massira’s puzzles are simple to the point of being insulting. Many of them require the two protagonists to work together, but this is never executed with the kind of rewarding creativity of that made something like Brothers: A Tale of Two Sons so powerful. Whether you’re herding animals, working the two characters together to rotate statues around, or simply looking for needles in haystacks, the solutions to Massira’s puzzles are always far too obvious to really work as puzzles.

The biggest pity is that all of these things simply distract from a powerful, evocative story. At a time where the world is in danger of losing sight of the very real humanitarian crisis in the Middle East, having been swayed into thinking that every refugee is a terrorist by corrupt, immoral politicians and complicit media, art works such as games, films, books and more that give voice to individual people and their stories is critical in encouraging empathy for them. Massira’s narrative is minimalist, but it’s powerful, and pulls no punches in highlighting the hell that these people have gone through to take them on desperate sprints from one place to the next to try and find somewhere safe for them and their families.

Massira is backed up with spot-on, thematically appropriate aesthetics. The indefinite, faceless people are a clever visual metaphor for the dehumanising that I mentioned before; so many vested interests want us in the west to see these people as faceless, homogenised shapes. They’re succeeding, too, which makes that bit of art direction such an inspired choice.

There are moments where the game touches on the surreal to an incredible effect, too. For example, in one particularly memorable scene you’re tasked with helping out some children slaving away in a sweatshop with manufacturing some clothes. The image of the little kids sitting at the sewing machines, which had transformed into these sinister-looking dragon designs, was genuinely harrowing, like one of those old Disney film dream sequences gone so, so wrong.

The game is filled with these kinds of moments; an ongoing sense of unease about how any of this is happening to the characters and those around them, without so much as a drop of blood, or a second of physical danger. It’s not coincidental that those moments are also the moments where the “gameplay” takes the back seat, and I hate to harp on it, but those platforming and puzzle sections in Massira let the game down so badly.

I have to compare to another game, recently released on console for the first time and covering a very similar topic. Bury Me, My Love, is so much more effective at building empathy for the protagonists, because, as a “visual novel”, it’s not broken up by arbitrary “gameplay” stuff. There’s a better sense of consistency, and focus is kept firmly on the characters, which are the very core of the experience. There’s no platform jumping segments to take you into a different head space entirely. 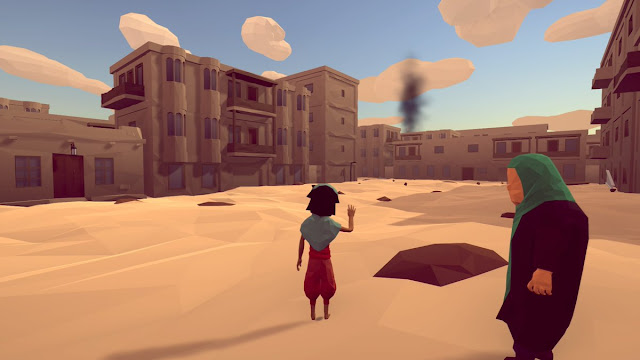 Massira comes across as a immature project. Not “immature” in the sense of being juvenile – it’s actually achingly sincere and I wish it didn’t deserve criticism, but “immature” in the sense that the developer clearly lacked the confidence to create something outside of standard gameplay tropes, and those tropes really let Massira down in the end. It still tells a potent, important story, and looks the part, but I fear the only thing people are going to notice as they play is how unrefined and often downright irritating they find the button-pressing bits, because they are so poor they completely overwhelm the stuff that players should be focusing on instead.