Bury Me, My Love should be a game that is mandatory for us all to play. At a time when in the west we have developed a kind of cultural sociopathy towards the most desperate among the human population – people who our nations are directly responsible for putting in the position that they are, a game that encourages us to see these people through the same lens that we see our own friends and family might just be the best weapon that we have in combating bigotry.

Bury Me, My Love is a game about a refugee that is fleeing Syria for Europe. Rather than directly experience her story, however, instead we play as her husband back in Syria, as the two communicate via a messaging platform. Mechanically it’s a simple text-based visual novel, but that descriptor belies the impact the game has. Bury Me, My Love is often harrowing, sometimes funny, but always emotionally affecting.

Here, in Australia, the government and media is largely in lock-step, and actively collude in doing everything they can to de-humanise refugees. It’s so much easier to whip a society into a panic about what refugees might do to it if the masses don’t see them as people. The government locks refugees that try to flee to Australia up in offshore concentration camps and then denies media access to those camps to any journalists that aren’t “friendly” to the government’s agenda. Simultaneously, the same politicians and media pundits insist that we need to be selective about which refugees we actively attempt to rescue. It was fine to share stories about the plight of white farmers in South Africa, but a desperate Saudi Arabian girl requesting an escape from Thailand? No, not a peep as our government drags its heels, hoping that the girl would be sent back to almost certain death (and then, for some reason, getting furious at her for “snubbing” Australia and instead accepting asylum in Canada when its prime minister, Trudeau, came through for her). 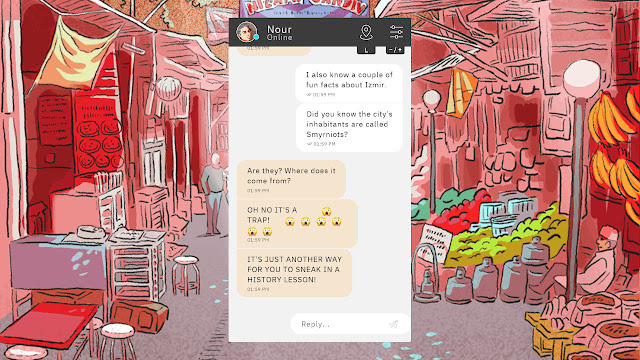 The only time there’s ever a mention about the mortal danger that refugees and asylum seekers are in is when those same politicians trumpet that in “stopping boat arrivals in Australia” they’re also stopping “deaths at sea.” It’s a disingenuous argument, of course, because these people would still be dying from persecution and war if they weren’t fleeing, but for far too many people in Australia – politicians and the bigoted mob alike – as long as these people are dying outside of our media coverage, that’s acceptable. Using the deaths of people to further a political argument when you don’t actually care about their deaths is offensive beyond measure, but as I wrote at the start – we do live in a time of cultural sociopathy. It’s sad, but it’s the norm.

I firmly believe that there would be no cultural appetite for this kind of bigotry or treatment of asylum seekers and refugees if their stories were in wide circulation and presented in such a way that the mainstream had a point of reference to develop empathy out of. That’s why Bury Me, My Love, is so powerful. By presenting the story of a refugee in such utterly mundane, everyday terms – a series of text messages and photos between husband and wife – it’s so very easy to put yourself into the story. I text my wife all the time when we’re apart – at work or whatever. So many of the conversations that happen in Bury Me, My Love, so closely mirror my own everyday. In the game, the wife sleeps in and misses her plane, so they scramble together to figure out a solution. I’ve done that myself (actually, to my great embarrassment, more than once), and the text exchange probably looked similar. Just like the couple in Bury My, My Love, I’ve also texted back and forth with my wife about bits of news that we’ve seen while out and about, or shared photos about things that caught our attention. Neither of us are refugees, and never have been, and that’s entirely the point; refugees are human. Many of their experiences mirror same experiences that we all have.

Other moments in Bury Me, My Love, are, of course, terrifying. When the woman’s on the river border of Turkey and Greece, and about to attempt to use a cheap inflatable raft to make her way across the river in the middle of the night, all we can do for the next couple of moments, as the in-game clock ticks by, is wait for her to message again, not sure if she made it. It’s tense. For all the communication and convenience that mobile phones have opened up, there are moments where the inability to be physically with the person that you’re communicating with can lead to an overwhelming sense of powerlessness, and that can be frightening. Bury Me, My Love does a remarkable job with those moments. At other times the stakes are less significant, but nonetheless, the physical distance between the couple is palpable. When the wife is in Greece and sees the abhorrent fascist imagery of Golden Dawn painted all over a wall, for example… well, my wife has sent me anti-Asian bigotry she’s seen around Sydney from time to time, and there’s simply no adequate comfort and solidarity that you can offer them through a messaging app. 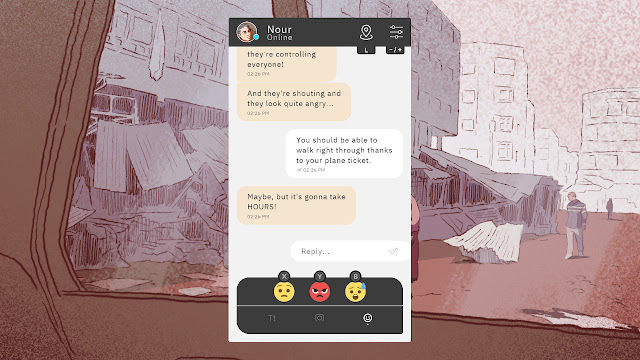 Bury Me, My Love does a great job of developing a sense of both characters. It makes full use of emoticons and selfies to give the conversations tonal accuracy to how people communicate over their phones today. For all the fundamental darkness given the context of the story, there’s also plenty of levity; it’s a feature of humanity that we’ll always try and make the best of our circumstances. Bury Me, My Love is based on a real story and real people. I don’t know if the developers had access to chat logs or how they went about building the characters, but regardless of where they came from, the characters are distinct, well-written, interesting, and ultimately believable nonetheless.

The only interactivity, or “gameplay,” in Bury Me, My Love is the ability to select from a number of different responses at points. I don’t know if making different decisions can significantly affect how the plot plays out – I’ve only played once so far and it’ll be a while before I’m in a space where I’m ready to play again – but certainly some of the decisions that you’ll be making seem to have pretty major consequences. What I did like, however, is that at times you’ll not be able to influence what “your wife” will do. You’ll be sending through suggestions, but there are times she’ll simply ignore you and go figure out a solution for a problem that she’s facing herself – or decide that because you’re not there, your ideas are rather unhelpful. This is not the kind of narrative that would have worked if all the agency was in your court, and the developers have absolutely nailed the balance in Bury Me, My Love. You genuinely get the impression that you’re interacting with a person. And people can and do make their own decisions.

Bury Me, My Love is an remarkable exercise in building empathy. It’s a simple game, but so much more razor focused and successful at creating authenticity than most games that have budgets of a hundred million. Most importantly, however, is that no game is telling a story of greater importance to the world at the moment than Bury Me, My Love. The games industry and those who play games keep arguing that there’s the potential for video games to have the emotional power and potential to be the next great art form. Here’s your proof.