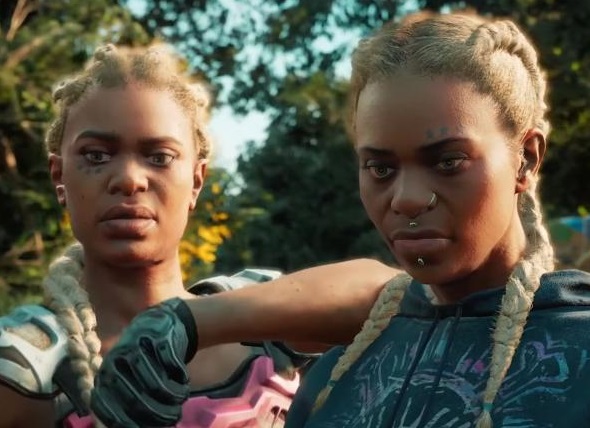 Far Cry New Dawn is Ubisoft’s latest in its long-standing series, and picks up seventeen years after the events of Far Cry 5. In that game Joseph Seed unleashed a nuclear blast, and in this one the survivors have emerged from their shelters. With the land having started to recover outside of the immediate blast zones and the people having started to find their own new ways of life, the county is once again thrown into hell when a group of bandits, called the Highwaymen, roll up.

Taking it from the top, you, the player, come into Hope’s County as the captain of security for a man named Thomas Rush. You’re on a train, which is derailed and there you immediately get your first encounter with the twin women leading the Highwaymen. They’re not nice people. Barely getting out of it alive, you are found floating in the river by a familiar face from the previous game who leads you to her mother, who is currently running one of the only two fortified “civilized” areas left in the county, Prosperity. There you get to work in order to start helping them take back what they lost to the Twins.

From this point I would like to say that whatever you do is entirely up to you as New Dawn is technically an open world, but I can’t, because it’s not. You can gallivant across the country side sticking it to the Highwaymen if you want to, but until you take up the first story mission or start hunting down a series of “specialists” that the town of Prosperity needs to recruit, you’re pretty much stuck, and your basic gear won’t be getting you very far. The only real way to get better gear to push further into the world is to move the story along and upgrade Prosperity and its functions. Even if you weren’t to compare this to the more open Far Cry 5, I found that the direction felt limiting and that the only reason that this was an open world at all, was because Far Cry has always been open world. Really, though, this one wants to be much more linear.


My experience with the series is limited to Far Cry 5 and watching a friend play through Far Cry Primal, but of course I know the series has a reputation for interesting antagonists. I’ve got to say though that I found these villains rather lame. They often come across as a couple of crazy, spoiled, brats that inherited their position and power, and that doesn’t lend itself to deep characterisation. They are both loose enough cannons that they have a tendency of killing or maiming “just ‘cause”, and while I get that Ubisoft wanted to portray these two as violent, we’ve moved on from senseless aggression in villains for a reason. I couldn’t connect with these two, didn’t particularly want to understand, let alone sympathise with their world view… and I’m not sure they have one anyway.

It’s such a contrast to my experience with Far Cry 5. In that game, the antagonists initially seemed like a bunch of rednecks, there was a bit more to it than that. Each of Joseph’s siblings, which acted as his lieutenants, had a reason for doing what they were doing. They didn’t just blindly follow but were given a reason to do so. Each were given a purpose and you could see that in how they strive to rule their respective areas. Even in Joseph himself, a man that heard the word of “God” and strives to prepare “his” people for “The Collapse”, you could get a sense for how a cause might coalesce behind a charismatic leader with a genuine vision, however deluded it is to the rest of us, and Far Cry: The Branch Davidians was fundamentally interesting (and frightening) as a result. The twins that head up the mob in New Dawn could have been an interesting exploration of how people behave in times of scarcity, but instead, we get random violence and narcissism. They just didn’t have the same depth and it’s unfortunate as so much more could have been done on that front. Far Cry needs it, too, because the interactions between yourself and the villain has always been what differentiates the series.

In regards to the overall gameplay, New Dawn is as solid as you might expect for a blockbuster FPS. There is a variety of different weapons, and collecting, upgrading, and mixing up your arsenal gives the game a light RPG-style progression system. Beyond the main narrative, there are all kinds of challenges that can be completed, and with the use of points, perks can be purchased to allow you to do more. The variety of stuff to do in Far Cry has always been impressive, and when you’re not gunning enemies down, you’ll be breaking into safes or repairing vehicles with a torch, learning how to fish, soaring around with a wing gliding suit, and so on. 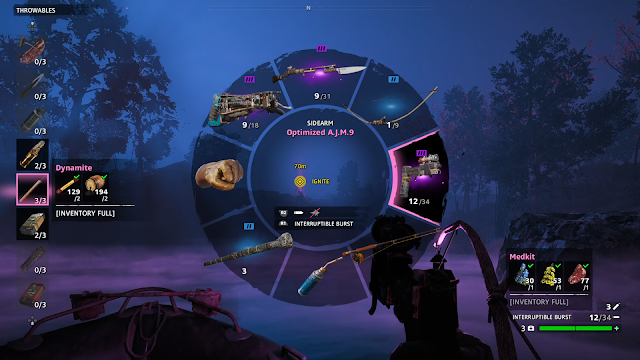 There’s also a big push for multiplayer this time around, which does odd things to the tone of the game. Of course, Far Cry has always had the co-op experience, but there are segmented “expeditions” that are purely designed around the multiplayer experience, and separate to the single player narrative. The Ubisoft open world formula has already been struggling to retain focus on the storytelling with all the distractions that it likes to throw at you – I’m not sure yet another was the way to build on the series.

Far Cry New Dawn while being a great experience feels more like an expansion to Far Cry 5 than it does its own stand alone title. This is not a bad thing, but if it had to be compared? It would be like saying New Dawn is equivalent to The Witcher 3’s Blood & Wine which was a great addition to the main title. The scope of the experience while smaller is still a solid one and will net at least a good dozen or so hours before running around to find the rest of the collectibles.