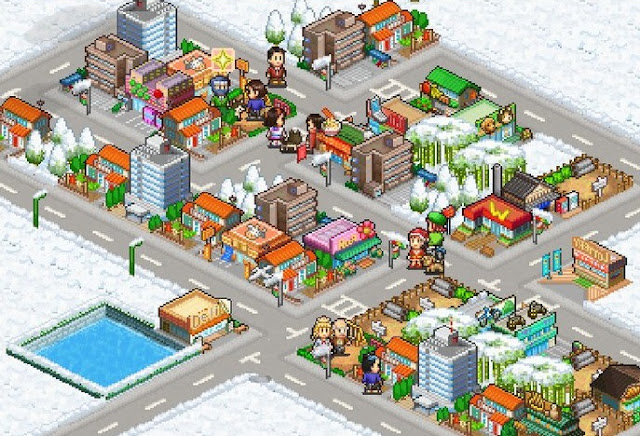 Kairosoft simulators are really hard to put down. There has been a lot of them now, and every single time they’ve offered the lightest of simulation gameplay coupled with adorable pixel graphics that are so charming that once you start playing, it’s easy to be swept up, and end up playing for far longer than you intended.

Venture Towns isn’t Kairosoft’s finest, but it is the latest to land on the Nintendo Switch. It’s Sim City or Cities: Skylines in Kairosoft style, and it’s still painfully charming.

In Venture Towns, you need to build up a flourishing city by giving people places to live, work, eat and play. This is rather simply done; simply select a plot of land from the menu, and then decide where to put it. If it’s a residential property, you need to wait for someone to move in (depending on how well you’re managing the city, that could be very quickly, or the plot might stand unclaimed for a long time). Business and retail properties are built automatically, and incur a monthly cost to keep operational. 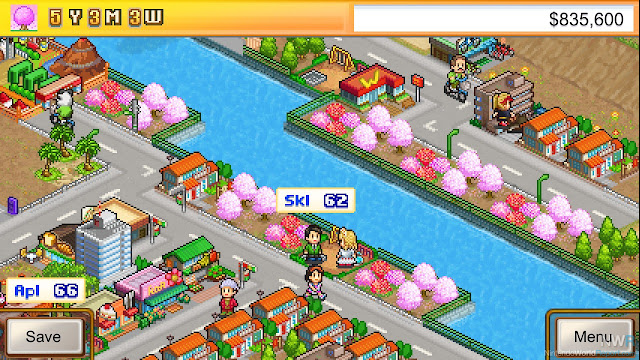 Your residents will go to work in an office every time they run out of money. Over time you can unlock new job options, which can earn your people greater incomes, and lead to a greater range of shops for them to spend the money at. Shops cover a huge range, including entertainment, lotteries, bike and pet shops (allowing people to get around town on a bike or wander around with a cat or dog), and food. As citizens visit these stores, you naturally get a bit of money dropped into your own coffers to continue building up the city.

There’s a catch to all of this – the kind of money that you make depends on the land value, and proximity that citizens have to shops and work. Citizens only have a small range that they’ll roam, and they’ll need all their work offices and shopping outlets within that range. Different buildings have a different impact on the surrounding land value, and you can also use trees and other plans to help boost land prices… so long as you don’t need that space for property.

Finally, you can create “combos” that offer big boosts, but require that you put three buildings next to one another, and if you have any of those buildings replicated nearby, the double-up will drain on the profitability of both. There’s a lot to manage in terms of placement in Venture Towns, and while the simulation side of things is fairly simple and straightforward, making the town fit together nicely is a significant puzzle-like challenge. 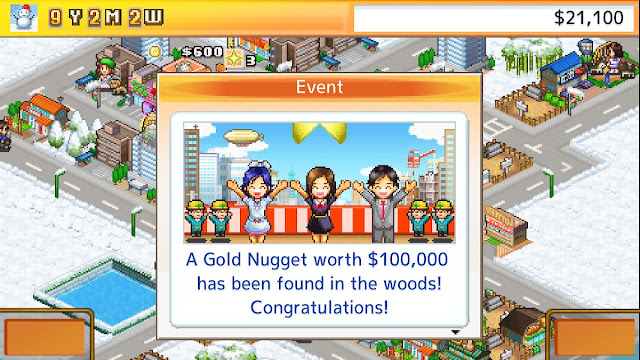 Unfortunately, unlike Hot Springs Story (which is also available on Switch, though we haven’t reviewed that one at DDNet), Venture Towns doesn’t have the same strong theme to really drive the pixel art home. There was something truly delightful about watching your expanding hot spring resort fill up with holiday-goers enjoying a soak, a massage, or a game or two in a pachinko parlour. In Venture Towns, you can build a huge range of shops, but you only ever see the facade; when your people go in to shop, they just disappear off the screen briefly while the cash they spent is added to your pool of money. The function of both games is exactly the same; both rely on you placing blocks around the screen effectively, and both have you making money from encouraging people to wander around the environment, but Hot Springs Resort’s narrower focus allowed the team at Kairosoft to provide greater thematic and visual depth.

Related reading: For a more serious and genuine simulation title on Switch, check out Project Highrise. Our review of the game on PlayStation 4 here

To Venture Town’s benefit, there’s a lot of replay value. Most Kairosoft titles simply peter out at the end and leave you with not much more to do than start over again (which, admittedly, you’ll be happy to do because they’re so charming). Venture Towns, however, gives you a score at the end of 15 years of in-game play, and then challenges you with trying to beat that score. With a half dozen or so different maps to play on, each with their own high score tracked, and 15 years in-game being a solid couple of hours of real-time play, Venture Towns is certainly generous by Kairosoft standards.

Unfortunately it also has a habit of forcing you to sit and wait for extended periods of time without much to do. At two of three points each in-game year, there’s a significant influx of cash – once per year when you collect tax on each property in town, and once or twice when a dude shows up to buy some of the resources that you accumulate through play. After this influx of cash you’ll likely have spent everything that you can within a few moments, and then you’ll have to sit, wait, and simply plan for the next cash injection to hit. This would be more tolerable if there was an accelerate button, but there isn’t. Every simulator has the ability to speed up time, and I’m not entirely sure why Kairosoft thought this omission would be wise. 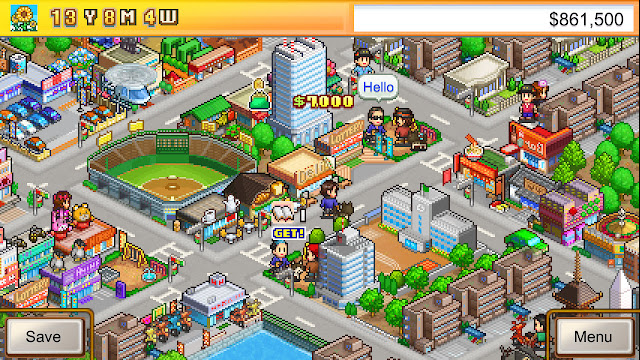 Still, for a cut-price, casual, relaxing simulator, it’s hard to go past Venture Towns. Unfortunately, on mobile, Kairosoft has turned to free-to-play mechanics with its more recent titles, which has completely disrupted the balance that made the company such a charmer in approach in the first place. Venture Towns is, mercifully, free of microtransactions and is an odd delight to play on the big screen, where once Kairosoft was restricted to small mobile phone and tablet screens.