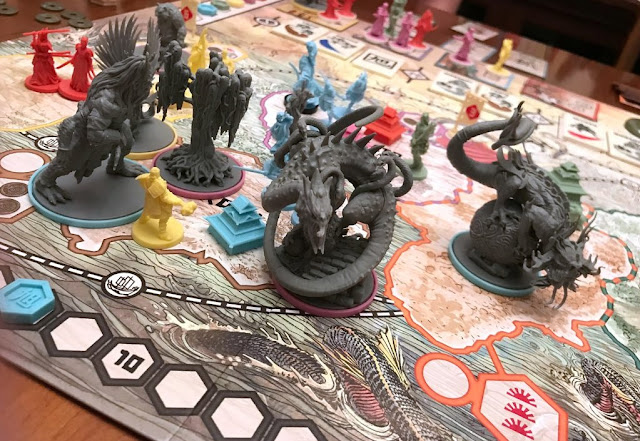 While we love video games at DigitallyDownloaded.net (you probably noticed that, right?), we’re also big fans of Japan as a country (which you probably have also noticed). Japanese video games are great an all, but something that perhaps fewer people are aware of is that Japan’s history and culture also makes for some pretty special base material for board games.
You do love board games/ card games or tabletop games, right? Sure, it’s a pain to set them up (and then pack them away) sometimes, but nothing really compares to the tactility and “in-room” social nature of a board game. Rather than staring at a screen, you’re looking at the other players, and communicating directly at one another. It’s a different kind of game experience, but a good board game and a good group of players is the perfect way to spend the evening.
With that in mind, I’m going to list five of my favourite board games that are based on Japan – the added benefit being that these games aren’t just good fun (though they are certainly good fun). Through these games you’ll learn something about Japan, be that its culture, its aesthetics, or the way the people of the country approach thought.
Machi Koro
Unlike some of the other games on this list, this one was made in Japan by Japanese board game designers (and while Japan does have a healthy board game industry, it’s not entirely common for us to get Japanese-developed board games in the west).
Machi Koro is a brilliant little card game that’s designed for between two and four players, and can be learned in about five minutes. It’s basically a city building game. You start off with a field of grain, a bakery, and a dice, and by rolling the dice and collecting resources, you can start to build up your city with other buildings and resources, ranging from radio towers and theme parks through to cheese factories and the like. The goal of the game is to end up with the biggest and most impressive city.
Machi Koro is non-competitive, in that while there’s a winner, players have a very limited capacity to “attack” their opponents or directly affect them. In that way it feels very much like an Eurogame to play, but with Japanese aesthetics and a Japanese approach to game design running behind it. 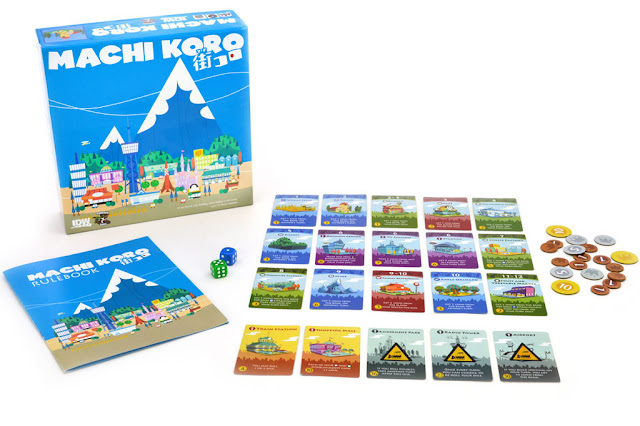 Rising Sun
Rising Sun is a mammoth game, with dozens of plastic playing pieces, a deluxe board that will take up a big chunk of the typical table, and so on and so forth. It’s the most premium board game experience on this list, and looks the part (it really is gorgeous).
It’s a western-developed game, and it’s also a brilliant game that takes some of the most well-known concepts of the samurai martial culture (as we know them in the west) and applies them to a board game format. Rising Sun is a game of alliances and honour; you need to work with other factions when it suits you, and betray them at other points before working your honour back up again. You do all of this to control territories on the map, carefully moving limited numbers of units around and engaging in combat in which seppuku (ritualised suicide) is every bit as effective in terms of achieving long-term victory as standing and fighting.
The game also shows plenty of research into Japan’s more mystical and mythological side, with a number of Shinto’s most powerful and well-known gods making an appearance, as well as mystical creatures such as Oni, Komainu, Yurei, and Dragons. 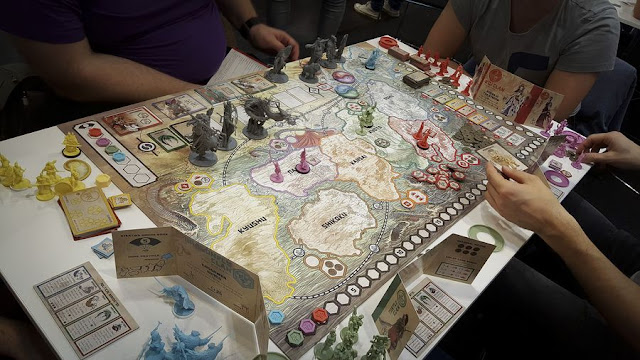 7 Ronin
As the name probably suggests, 7 Ronin is a riff on the classic Akira Kurosawa film, Seven Samurai. In fact “riff” is probably disingenuous; the game is a complete replication of the core narrative of Seven Samurai, and is probably named differently only because of licensing challenges.
In 7 Ronin, one player takes control of seven ronin (masterless samurai), who are tasked with defending a village from the other player, who controls an army of ninja. Each turn, players in secret spread their forces across a map of the village, and then they reveal their army layouts to one another at the same time. Depending on where the ronin or ninja have been placed, there’s either combat, or the ninja start to capture blocks of territory in the village.
It’s a tough game to play as the ronin, but if you can hold our just long enough, you’ll gain victory as the winter sets in. 7 Ronin can be learned in a few minutes, but its tactical depth, which requires that you try to understand, guess, and second guess, the moves of your opponent, make for something that only gets better the better you know your opponent. The game itself has simple presentation, but if you’ve ever watched Seven Samurai, the aesthetics and tone of this board game are absolutely spot-on, to the point that it’s easy to reminisce about the film as you play the game. 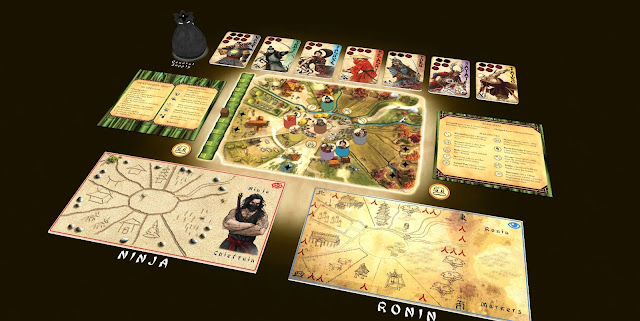 Tokaido
The Tokaido is one of the famous old roads of Japan, used by people who needed to travel from Kyoto to Edo, once Edo replaced Kyoto as the political capital of Japan, and suddenly the people of Kyoto needed to travel a lot more. It’s a famous road for being very scenic, with plenty of ocean, field, and mountain views, and back in the day, an extensive network of satellite villages and rest inns provided food and services to travellers.
Tokaido is a no-pressure, zen, beautifully minimalist board game that represents that journey. Players aren’t really competitive with one another at all, and are encouraged to take their time, and simulate the experience of walking the Tokaido road, and sampling all its wonders, delicious foods, and opportunities for reflection.
Of all the board games on this list, Tokaido is perhaps the one that I find captures the Japanese spirit most perfectly. It’s a clean, elegant, and uncluttered game, which everyone can enjoy at a relaxed pace, and it really captures the imagination in a way that, as someone who has been to Japan, few other games have. Tokaido is right up there with Yakuza as one of those rare experiences that makes me really yearn to be back in Japan. 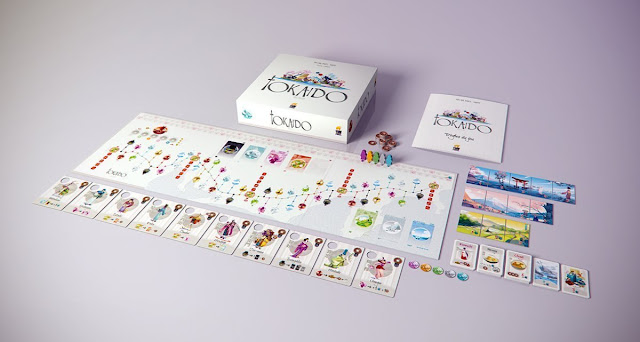 Finally, GMT Games’ Samurai is by no means an easy game to play. In fact, it’s an enormously complex one that only highly experienced strategy wargame board game fans will be able to understand without a lot of practice and rules re-reading first.
However, it’s worth persevering with the rules and going through a weekend or two of frustration, because once you understand how to play Samurai, there is no game out there that does a better job of recreating the key battles of the Sengoku period. The research that went into Samurai is impeccable (although for some reason the rules get various names wrong… perhaps a matter of translation), and the mapping of forces, as well as the military strategy that it enables, allows you to truly recreate a decisive series of battles and play “what if” scenarios to see if it would have been possible to change history.
In other words, this board game is for people who are fans of Japanese history, and want to play out some of the dynamic moments in the Sengoku period. It’s a more intense and complex version of the battlefield tactics of Nobunaga’s Ambition, and while that’s undoubtedly niche, it’s also wonderful. 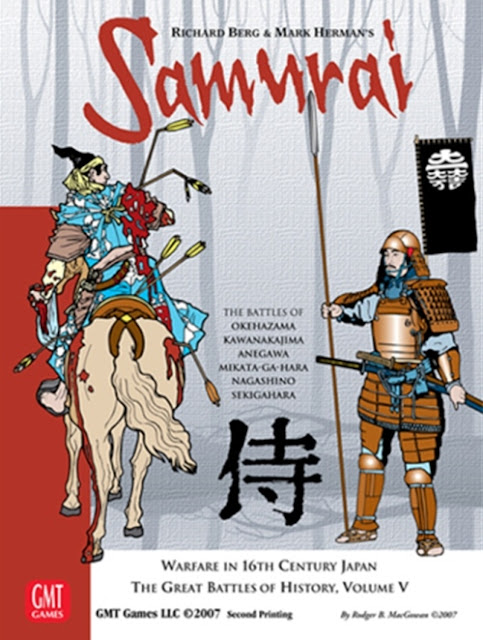 Bonus: Legend of the Five Rings RPG
I’ve thrown this one in, because, firstly, Legend of the Five Rings isn’t precisely a board game. It’s a pen-and-paper RPG, in the same vein as Dungeons & Dragons. Additionally, while it’s set in a fantasy feudal Japan in theory, the game is made up more an amalgamation of Japanese, Korean, Chinese and Mongolian elements. In other words, it’s more a generic soup of “the exotic East” than something outright Japan.
And while I have issues with the way Legend of the Five Rings has a very orientalist tone in its “who cares where it’s from, as long as it’s exotic” theme, the game itself is really quite wonderful, with a great set of systems behind it, and it does offer a genuine attempt to distance itself from generic western fantasy, both with unique character types, and an entirely different set of monsters and adventuring environments to play through.
As with any pen-and-paper RPG, Legend of the Five Rings is better when the roleplaying group is better. Unfortunately, to really capture the imagination, Legend of the Five Rings also really needs a group of people with first hand experience of the aesthetics and environments of Japan to really craft the fantasy. If you can get that group together, however, you’ll be able to enjoy something that’s really quite uncommon… because even in video games, how many times do we have an attempt to do a samurai, swords, magic, geisha, and Kyoto-themed fantasy RPG? Not that often at all. 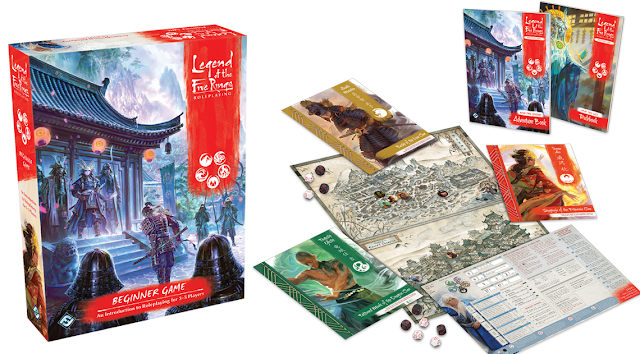