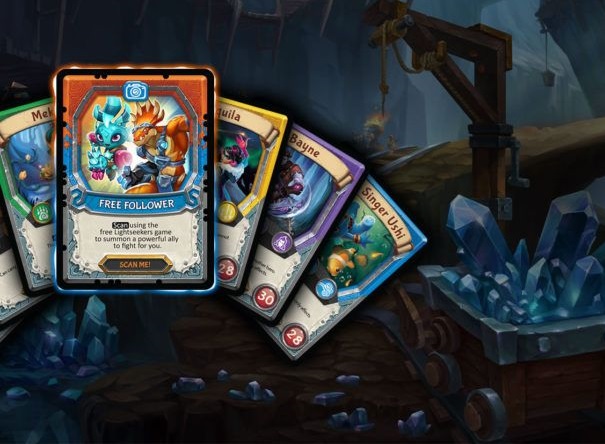 Having a card game on the Nintendo Switch is the most delightful idea. As someone who started playing the physical Magic: The Gathering from the very first edition, and then played dozens of other trading card games (TCG) in the years since, from Call of Cthulhu to Lord of the Rings, Final Fantasy to Weiss Schwarz. I’ve also been a big fan of digital TCGs, and put my fair share of time into Might & Magic, Pokemon, Hearthstone and that Elder Scrolls one. Some of these TCGs I’ve enjoyed more than others. I’ve never disliked one quite as much as I’ve disliked Lightseekers.

All the other TCGs that I’ve played have been strategic, in that you carefully construct your deck of cards so that, once in play, you can craft complex webs of cards working together with other cards to enhance their total strength. My idea of a good deck of cards in a TCG, is one in which I can summon characters, build their strength through items and spell cards, and then control the battlefield by making sure that I maintain just slightly more power on the field than my opponent.

Lightseekers doesn’t allow that. Lightseekers is an endless parade of transient spells, and without the ability to build a substantial long-term strategy around key cards, Lightseekers feels so painfully shallow. The key problem is the feature that Lightseekers trumpets the loudest; the way that cards are played. In addition to instant spells, which can be used on your turn and are instantly burned up for some effect (usually healing yourself, or harming your opponent), you can summon characters to the play field. Each character has a series of numbers printed on the corners, and each turn, the character card rotates 90 degrees, and whatever that number in the corner represents (letting you draw extra cards, for example, or dealing damage to your opponent, or protecting you from damage), then plays out. 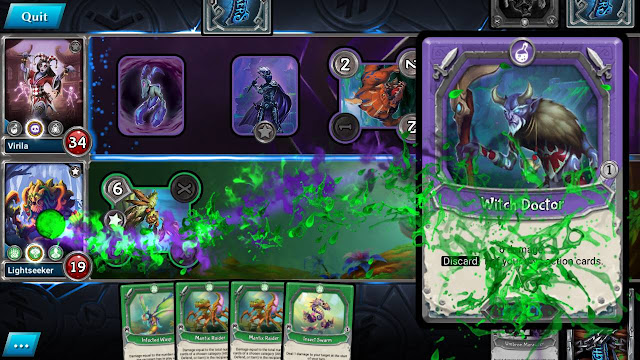 This is a nice (and unique) idea in there in theory since, with four corners on the card, every single character in the game adds a potentially huge number of effects to the game. The problem is that once a character has used each corner once, that character is immediately removed from the game. That’s right – at most, a character will be on the table for four turns.

There’s a precious few abilities that have some kind of effect that can extend a card’s presence on the virtual table, and a tiny few number of cards that are permanent summons. Putting those rare cards aside, for the most part, the design of Lightseekers is such that you’re constantly watching cards that you’re using being removed because of an arbitrary time limit. Because you get so few turns with any one card, there’s no way to build strategy around them, and there’s limited capacity for the game to involve really powerful cards that take a lot of work to summon. The strategy that Lightseekers attempts to open up is in flow and timing instead; cards of one type can be boosted in power if the previous card removed from play was of a certain different type. I’m all for card games that reward players for deckbuilding to establish a rhythm to play, but in Lightseekers you also face extreme limits in how many cards you can draw and play each turn, so the very design of the game is still working counter to your ability to build up towards a flowing, complex, strategic hand.

Because of the transient nature of summons and abilities, the other area where Lightseekers suffers is that all decks of cards feel the same to play with. In most TCGs, such as Magic the Gathering, playing with (or against) a “black” deck, with its focus on risky play by draining your health and weakening your characters in order to potentially do massive damage to your opponent, is very different to the “green” deck, which is all about building up monsters of incredible power, or the “white deck,” which is all about keeping your health levels up and defending your (initially weaker) characters. 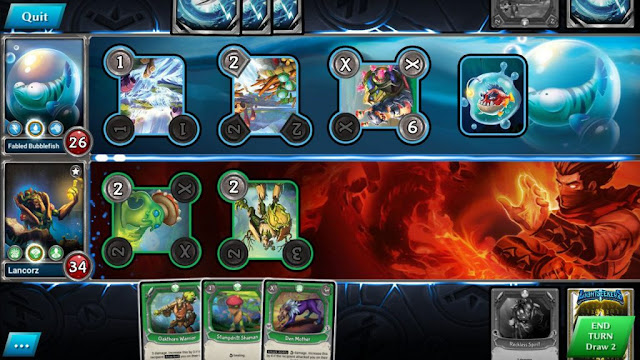 In Lightbringers, the differences are far more subtle, since the bulk of cards in every deck either deal damage directly, or heal it. Powerful cards do more damage or heal more damage, but the end effect of most of these cards, across most of these decks, is simply too consistent. From one perspective, it’s a good thing because it means that you can happily play with any deck without having to dip deep into the microtransations to find a specific card for the specific faction that you like to use. On the other hand, it means the game lacks personality and struggles to create a sense of different play styles clashing with one another.

The interface doesn’t help build personality either. The Nintendo Switch has a nice, big screen, but the art on the digital cards is flat and uninspired (it’s like a fanart homage to the style of Hearthstone), and this is a huge problem. So much of the appeal in a digital card game is in that art. It’s why the Final Fantasy TCG has taken off so spectacularly over the last couple of years, and it’s why Magic the Gathering has remained so popular among both players and collectors. I don’t know if anyone’s going to have favourite cards in Lightseekers, nor care to delve into its lore outside of the game. It’s apparently possible to buy physical packs of cards, and then “scan” them into your game, but while this sounds like a really neat idea, in practice it’s so clunky. You’ve got to link your Switch copy of the game to your mobile account, and then take photos of the cards using your mobile phone. Given that there’s no society out there for physical Lightseekers card games, I can’t see many people bothering with this.

I certainly think there would be interest for a high quality TCG on Nintendo Switch. Even with my iPhone and iPad being there and available, I prefer playing games on a console, and so would love to be able to play a TCG on the Switch on the go. But Lightseekers isn’t going to be that game. The designers don’t seem to have understood how strategy works with card games, and, unfortunately, that’s really what differentiates a good TCG from a very poor one.