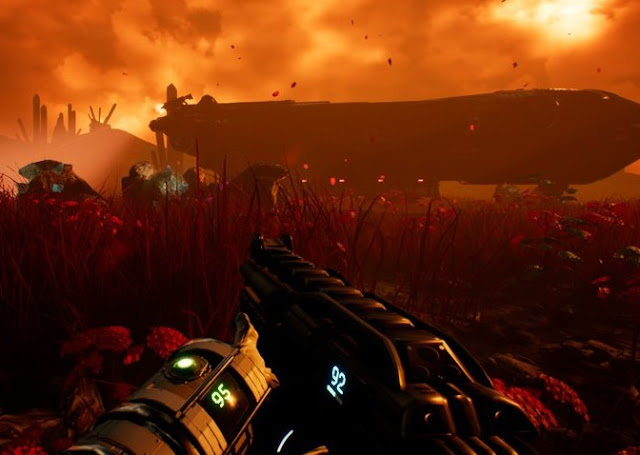 Space is considered the last destination in humanity’s journey to conquer its environment, and there’s romance and drama in that. Consequently, this final frontier has been tackled by many game developers with their own spin on what space is, means, and must be like. Some focus on the experience of exotic planets, while other developers have made the journey to those locations as their prime focus. There’s no right or wrong there, however, Genesis: Alpha One is a standout for going above and beyond that and offering a bit of everything, while also capturing the voyage in a way that highlights the isolation and complete hostility of that environment.

Right from the start, Genesis Alpha One can come across as overwhelming. Even the idea of it is overwhelming; it bills itself as a rogue-like first person shooter mashed together with a simulation as you build out a ship to handle the ever increasing environmental and alien hazards up in space. To put it another way, you might call it FTL meets a FPS, and that’s a blend of gameplay elements that people would be immediately familiar with.

It’s not a game that you’ll find instantly accessible to play, either. My initial couple of play throughs started well, and I learned the mechanics to the point I was comfortable with the game. However at first, each play through ended in basically the same way; I found myself occupied with one task or another (usually mining nearby space debris for materials) for a few moments, only to discover half the spaceship had become infested with alien creatures, and those monsters had either blown up or destroyed half my fledgling expedition. It would get to the point where I stabilised the situation and had a few crew members left, but I would always just start a new game, because this game can be unforgiving when you’re on top of things and at the best of times. 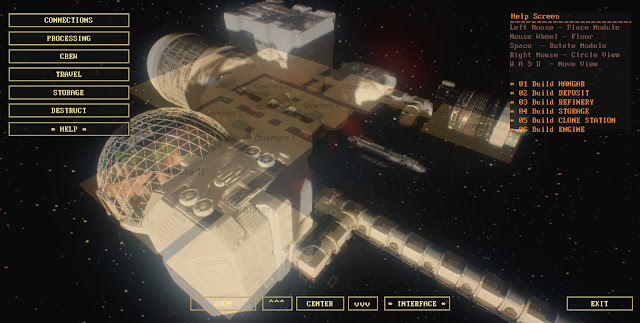 That experience, and the knowledge that one wrong decision, or allowing yourself to get distracted on an activity while ignoring the overall situation of a ship, can suddenly cascade into multiple life or death moments for the entire crew, is a big part of the game’s appeal. You’ll constantly be weighing up what new structures to add to the ship, given your limited resources, and the knowledge that a bigger ship is harder to defend. At first Genesis can crush the spirit, as it seems like there’s no way to carve out a path to survival, but stick it out and there will be moments where you do start to feel right on top of everything. Those times of prosperity bring a powerful sense of euphoria, and the sense of reward that comes from the game can’t be topped.

Resources can be collected by beaming objects from junk piles across the galaxy, however the good stuff can only be harvested from planets, and that requires away missions, which you can either be a part of, or delegate to your crew (hoping that whatever is down there doesn’t kill them off). At any given time, the player will only be focusing on a small area of the galaxy, but it’s possible to move around in search for new experiences and better resources as well.

Once enough resources are accumulated, the player can invest their time into expanding the ship. Rooms such as a greenhouse will allow an ecosystem to flourish, providing conditions that are required for life to the ship. Other rooms allow you to improve your technology and equipment for dealing with enemies, while others are there to lead resource extraction efforts. And there are other rooms designated for comfort and leisure to help keep morale up. However, the main focus will always be on those rooms dedicated to farming resources, which allows the cycle to begin once more to expand the ark.

This FPS meets FTL meets Aliens game does not screw around. It is so flipping good. #PS4share pic.twitter.com/DxIj49VbC3

One of the more interesting resources that you can gather up is DNA from species you encounter (and, typically, kill). These DNA resources can be spliced and diced to create additional life forms on the ship. This is how you grow your crew population. While the traditionalist might go for the cheaper human option, other life forms exist and offer both negative and positive traits. If humanity is a middle ground on what is possible, other life can have a negative effect such as low intelligence but a return by been a stronger soldier. These different life forms will also require a changed biosphere to be able to thrive on the ship. Plants can be collected from alien planets which can be added to the existing greenhouse or you can build a new greenhouse specifically so the entire crew can remain happy.

The crafted life can be put to work to speed up tasks in any of the rooms created, from the harvester to the greenhouse and even the DNA lab itself the ship. Players can also manually go to any of the computer terminals in the room and lend a hand in speeding up the tasks currently being performed. But, again, do that and you might be blind to catastrophes happening in other areas of the ship. Finally, you also need to spend plenty of resources in keeping that armoury stocked up. You’re going to want to have plenty of turrets scouring the access tunnels for infestations, as well as protecting each major room where your people are working. And, of course, you’re going to want to have great guns all for yourself, and your soldiers, too.

What I found with Genesis Alpha One is that it is a game that juggles all the conventions of a traditional first-person shooter with the rogue-like and “city builder” genres, and does it well. It isn’t a draining experience, even with the permadeath mechanics and unexpected setbacks from alien infestations. It is a game that you’ll dwell on, and itch to get stuck back into, just to see if you can push further on with the next attempt. 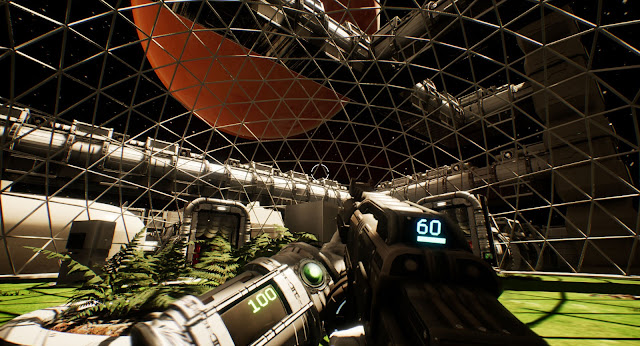 The universe of Genesis is vibrant, with distant systems lighting the ship with a beautiful sci-fi glow, and the aliens representing a full intriguing gamut from cockroach-like beasts through to humanoid aliens. This is the kind of game that people who dream of crafting their own space exploration stories, without being dragged through any particular forced narrative, will absolutely love.

Introducing A-set, an extremely cute virtual idol from the creator of Zero Escape