Circle Entertainment is prolific on the Nintendo Switch, and that’s an understatement. From rather enjoyable grand strategy titles through to lovely artsy nature romps and some genuinely brilliant rhythm games, the publisher has come a long way from when it was churning out the most detestable tripe you could imagine on the Nintendo DSi (don’t believe me? Read this old review). Now it’s one of the better indie publishers out there, and while SubaraCity won’t be remembered like some of the others, it’s a surprisingly pleasant puzzler.

If you’ve played Threes!, 2048, or some variation thereof, you’ve played SubaraCity. As with those games you’re presented with a grid of objects, and your goal is to consolidate those objects down by matching them up. In this case, you’ve got to link similarly coloured blocks that have depictions of buildings on them, and as those buildings merge together, the square left behind will have a larger building based on the sum of what was just combined on it.

So squares might start out at level 1 (depicted as a little person). Combine two of those level 1 squares together, and they’ll make a little hut (level 2). Keep doing this and eventually you’ll end up with a skyscraper (level 10) which can be combined with other skyscrapers to make legendary buildings and earn a huge pile of points. 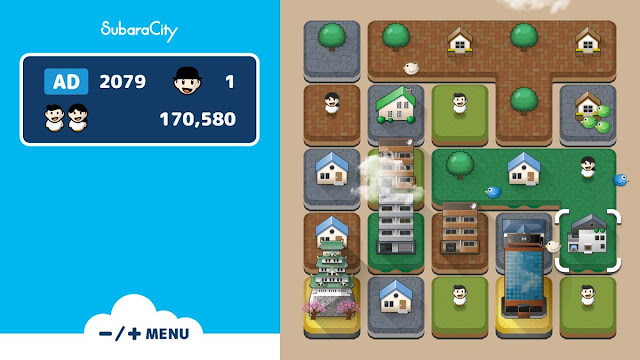 It’s easier said than done because the squares have to be of the same colour in order to combine them, and the playfield is relatively small, making it difficult to manipulate space to create really big chains of linked colours. Still, there’s no time pressure placed on you as you play, and the nice, clean presentation makes the game more restful on the mind than something you’ll feel like you need to concentrate hard on.

That presentation is really what SubaraCity relies on to both hook players in and keep them interested. The minimalist, but clean use of colour and building design is complemented by the appearance of little birds and other visual touches that are unlocked as rewards for hitting certain milestones. I’m actually a big fan of this kind of sleek minimalism, and while it doesn’t make for especially dynamic screenshots, SubaraCity is a game that is easy to pick up for short bursts of play. In part because games themselves don’t last very long (and you can save mid-game if you’d like anyway), and in part because it’s so easy on the eyes.

Just two things hold SubaraCity back from being genuinely memorable: firstly, there’s not enough information provided to players. The minimalism, which I’ve just praised, has also meant that the interface lacks critical information; when there’s five or six smaller buildings connected up, what are you actually going to be left with after you combine them? It’s impossible to tell, because while you might have something like the following set of buildings: 1 + 4 + 2 + 1 + 6 linked up, combining them won’t give you the maximum building cap of ten. There’s an obtuse mathematical formula running in the background, and it’s impossible to figure out at a glance what that is. That, or I’m just that bad at maths that I haven’t been able to figure out how the game’s formula works, and then apply it instantly to the visual information that the game does provide me. Don’t put that past me. I am really, really bad at maths. If you’ve figured out how to figure out the formula while playing, do let me know in the comments. 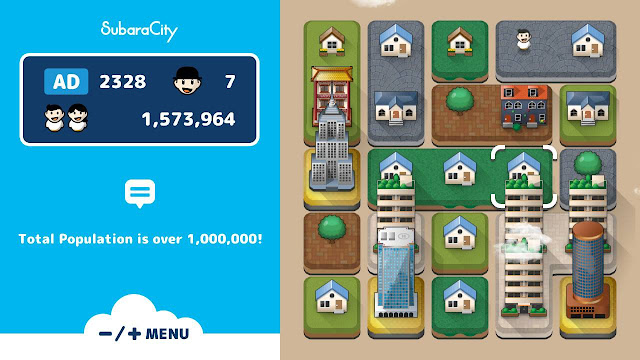 The other issue is that there’s no online leaderboard. There’s a local leaderboard, but it doesn’t even save player names, so, despite being a high score-driven puzzle game, there’s no incentive to try and come back to beat your score. Well, other than personal pride, and who has any of that these days?

Oddly enough, there aren’t actually that many genuinely good puzzle games currently available on the Nintendo Switch. There are two Picross titles, and those are reliable good fun, the recently released port of Captain Toad, as well as the Puyo Puyo Tetris crossover, which is both weird and wonderful. But beyond that it’s surprisingly slim pickings. In that context, SubaraCity is a genuinely worthwhile little game; it’s enjoyable, relaxing, and for the most part well designed.

Video: “Content” is the dirtiest word in video games