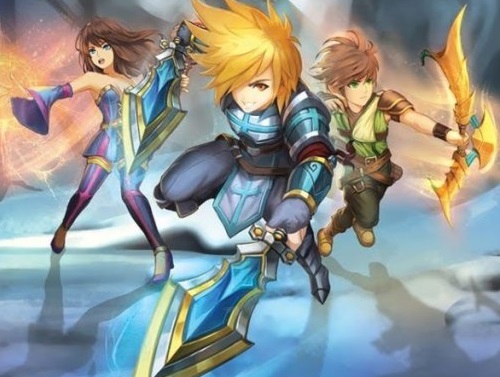 It’s hard not to admire the purity with which Rainbow Skies, like Rainbow Moon before it, sticks to a particular vision. The developer wanted to create a grind of a JRPG, with a near complete focus on pushing through one battle after another, with only the most functional of plot threads giving context to the action. That is exactly what the developer achieved, and while Rainbow Skies is the kind of experience that would get draining on a lot of people (and fast), for those of us that grew up on grindfests, back in the day where JRPGs were an endless sequence of battles, it’s both charming and nostalgic.

The defining feature of Rainbow Skies is that combat system. With each battle joined you’re transported to a small grid, with your team arrayed on one side, and a small horde of enemies on the other. It’s turn-based, and vaguely reminiscent of tactics RPGs in the mould of Final Fantasy Tactics or Disgaea, albeit with individual battles being much smaller in scale. To win battles you’ll need to make good use of your character’s varied range of skills (with each skill levelling up as you use them, becoming more powerful in the process). Different enemies also have strengths and weaknesses against your characters, so you’ll need to figure out (entirely be grinding away and fighting them over and over again) the best approach to take to these enemies.

You’ll do this over and over and over and over again. And then some more. Your characters will walk a couple of paces in-game and the opportunity to fight a random battle will pop up (these can be ignored if you need to get somewhere fast, such as back to town for healing). They’ll fight a battle, you’ll watch some of their skills level up, and at the end you’ll get some experience points and “skills” tokens that you can use to further power up your characters. Their weapons can also be upgraded and levelled up through combat. There’s rare materials to acquire by fighting the same enemies so many times. Overall there are so many different “experience” meters to keep track of, and reasons to keep walking around a small area repeating the same fights, that Rainbow Skies could almost be looked at as a “clicker” game, only without the timers. 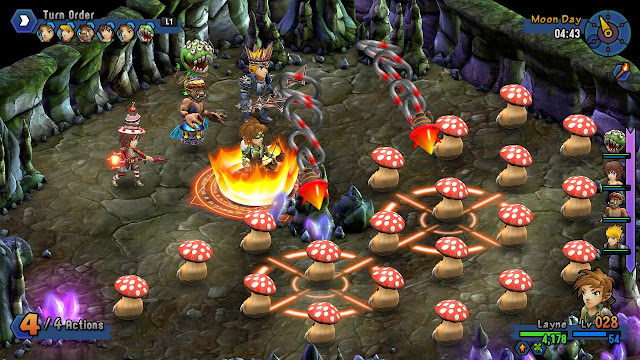 And if the game starts becoming a little too easy for you, you can grind out some more battles to earn the ability to increase the difficulty level. Throw it up all the way to prove how hardcore you are. I dare you.

Because the game itself is very linear, and what side quests exist simply involve more combat, there’s no escaping the repetition, and whether Rainbow Skies appeals to you or not will depend completely on your tolerance for JRPG combat systems. Thankfully, there’s enough tactical depth in the various skills and variety of enemies to keep that combat interesting, and the rewards come thick and fast enough that the grind never becomes a crawl. Instead, the efficiency underlying Rainbow Skies makes it delightfully unpretentious to play; the tasty fast food of JRPGs.

There’s also a bright, colourful, and vibrant world to provide the backdrop for the combat, and progressing through each new dungeon or reaching each new area is enjoyable just to see what kinds of enemies you’ll end up fighting next. There is too much repetition in enemy designs, which the developers might excuse as a throwback to the glory days of palette swapping in JRPGs, but you do expect better from a modern game. Coupled with the inoffensive soundtrack and a minimalist, but lighthearted narrative joining the dots together, Rainbow Skies shows a clear maturing over Rainbow Moon. In that game the developers didn’t have nearly the same level of control over pacing, and as a consequence it hit points where progress was slow enough to make you want to stop. This time around the trail of breadcrumbs that leads the players on is far better implemented. 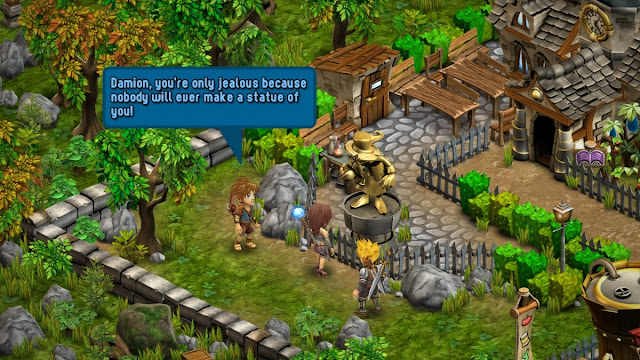 Oddly enough, Rainbow Skies reminds me most of Pokemon. There’s no monsters to collect, train, and level up in Rainbow Skies, but just as I loved levelling my Pokemon up for the sake of it, so too did I find the progression systems in Rainbow Skies enjoyable for the sheer joy of seeing my peeps getting better. It’s possible to level stuff up well beyond what you need to finish the main narrative and objectively there’s no great purpose or reward for going to excesses. And yet, I did indeed find myself training up skills I didn’t necessarily need and overdeveloping my characters because the process itself was, simply, enjoyable.

Rainbow Moon was one of the few games that I really capitalised on cross save with, and Rainbow Skies, thankfully, includes it too. The ability to grind out some levels and experience while on the go with the PlayStation Vita, and then pick up and continue playing on the PlayStation 4, suits this kind of experience to a T.

Yes, Rainbow Skies is a superficial and shallow kind of game. It’s apologetically grindy, and a time sink for the sake of being a time sink. Most of the time, it’s the kind of thing I simply wouldn’t enjoy, and yet, somehow for both it and its predecessor, it all comes together to be something I do really enjoy. The purity and simplicity of what drives this game is appealing, and even refreshing, and the perfect thing for a lazy Sunday afternoon, when you just need to clear your head.

Blade Strangers has a release date