Thanks to PQube, acclaimed visual novels Muv-Luv Alternative will be launching for the PS Vita both physically and digitally. That’s right, another amazing physical Vita release before the GameCarts are discontinued in the Western world. The games will be released in Europe on June 8 and North America on June 12. Here is last year’s English announcement trailer:

Muv-Luv and Muv-Luv Alternative are two visual novels from the same series, and this is the first time any title is being English! I’m talking interdimensional love story with extreme despair. In Muv-Luv, Takeru is a high school senior who wakes one morning to find himself in bed with an heiress — eep! She says her name is Meiya and that they are destined for each other, but Takeru’s childhood friend Sumika isn’t falling for it. She’s in love with him. And he’ll need to decide… before you head into Muv-Luv Unlimited, the second half!

In Muv-Luv Alternative, you’ll get, and I quote, “political conspiracies, international espionage, alien menace, quantum causality, bittersweet reunions, genetic modification, and much, much more.” How could you not be intrigued?! Three years have passed since that fateful day Takeru awoke in Meiya’s bed, and he awakes again in his childhood bedroom. Back to the hellish world that he awoke to three years ago. Can he change things this time around?

The surrealistic masterpiece, killer7, is finally getting a re-release

Goichi Suda is a favourite here at DDNet for his distinct sense of aesthetics and storytelling, his love of what can only be described as punk surrealism, and the slick action that comprises most of his games. And now his magnum opus, killer7 is finally getting a re-release on a modern platform: the PC.

killer7 is, in theory, an on-rails shooter, and yet it is so much more than that. A slick, psychological thriller with an incredible sense of style, and a noirish cel-shaded art style combine to create something like you’ve never (ever) played before. Even measured against Suda’s own games, we’ve never seen such a stunning execution of sheer vision since.

The PC port is being brought to us by NISA, and it’ll be more than just a port — as a Gamecube game it needs a spruce up, and the PC release will indeed be in high definition. No word on a console port at this stage, but we have hope — another Goichi Suda classic, The Silver Case, was remade exclusively to PC at first as well.

I’m not going to waste your time. Here it is: 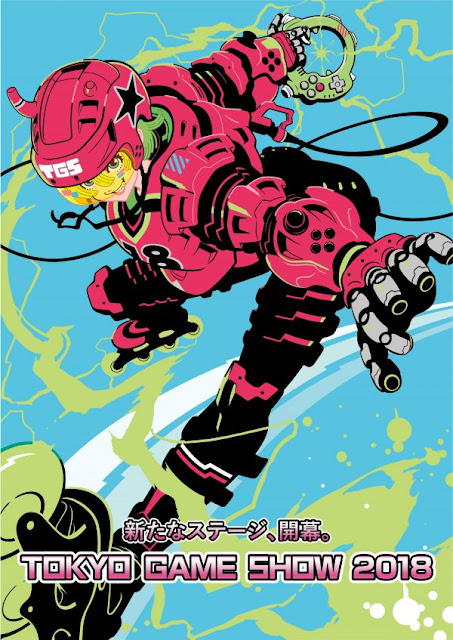 This year’s image is again illustrated by Ippei Gyoubu, who has also done several past main visuals. This year’s theme, stated on the image, is, “The curtains open on a new stage.”

This year’s Tokyo Game Show runs from September 20 to 23, and as always we will be on the floor with our coverage!

Cross-franchise fighting game, Blade Stranger, has a cast that includes characters from Code of Princess. Including the princess herself, Solange. And now we have a trailer focused on her:

Solange brings her giant greatsword into battle (a bit of an unfair advantage, if you ask us), and looks like she’ll be the slower, heavy hitting types.

Blade Strangers itself won’t release until Summer (Winter in the southern hemisphere), and is looking like a genuine highlight among fighting games in a year where there are a lot of great-looking fighting games being released.