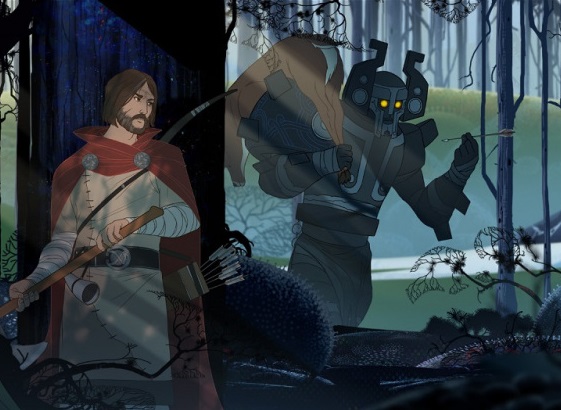 There’s a certain appeal to brutality from both an aesthetic and a mechanical perspective. Unforgiving yet pristine landscapes feature heavily in video games, like I Am Setsuna and Horizon: Zero Dawn. It’s not solely because of their deadly beauty. It’s more likely because of the psychological and moral pressure that these environments can exert on its inhabitants and by extension, on players. Think about the usual choices that you have to make in RPGs, but amplified somehow by the duress of living in a world that could kill you. The odds are stacked against you when you’re alone in the wintery wilds, and more often than not, the Banner Saga makes those odds heartbreaking.

Related reading: For another take on the game, here’s our review of the iPad version

While you’re dropped into what feels like an established pattern of suffering, it can be a bit tough to find your bearings. However, the disorientation works to Banner Saga’s advantage here. Its introduction is the game equivalent of the opening montage of a dystopian film. Everything sucks, people die, and you only have yourself to blame. You’re thrown right into a cauldron of complicated fantasy racism, politics, and pain within 15 minutes. In terms of learning about how things work, there’s really no better way.

The fact that the action is immediate and devastating is one of Banner Saga’s strongest points, and it shows. It’s not an incredibly long game, but it doesn’t have to be; it’s frighteningly impactful in its ability to condense a narrative that screams “historical fantasy epic” into a digestible form. You’re making difficult decisions from the start, often with very little information to go on. It’s incredibly haphazard, but it’s authentic to the characters’ lived experiences. 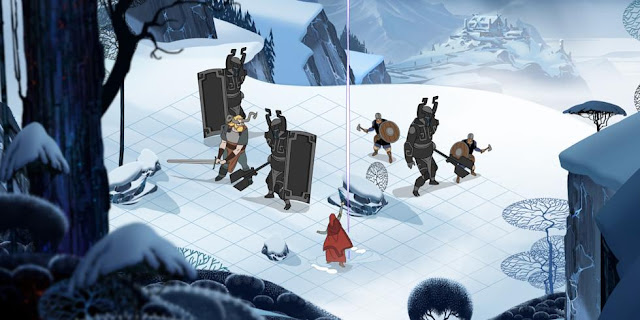 You’ll take on the various roles of king, father, and reluctant leader in parallel narratives. Neither one of those roles screams “job security” in a frozen wasteland. It’s really only fitting; as someone who had leadership thrust upon you, you should struggle to get your bearings and to learn how to make choices for a starved and weary collective. Banner Saga does very well tugging on the yoke of leadership that it fastens around your neck. People will desert you, they’ll admire you, they’ll even die for you or undermine you. It’s nothing personal, it’s just effective medieval politics with a body count.

Where you’ll rack up most of that body count isn’t during combat, even though that has its own strategic charms. While its blend of traditional turn-based strategy isn’t much to write home about on its own, it’s actually the decisions you make post-slaughter that are interesting. After your party and the enemy have duked it out on a grid, you get the choice to continue the skirmish or to take more cautious actions. Each choice here will result in various effects, and potentially more death.

This mirrors the choice that you get to make before initiating combat. Sometimes you and your people can roll past enemies without being hindered, but they may have something that you want. Even though you’re controlling a small group on the grid, they represent your much larger force that can often number in the hundreds. It’s those decisions that creep up on you before and after combat that determine the true casualties – it’s not up to the heroes on the battlefield. That seems to be commentary in its own right; this game isn’t meant to be about glory, it’s about keeping as many of your people alive as possible. 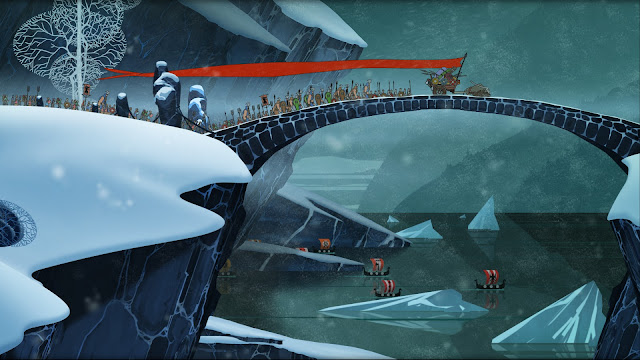 The Oregon Trail aspect of this game is where this core message stands out the most. You and your caravan will trundle along to various landmarked locations, with events triggered in between that give you more chances to make decisions that could either help or hinder. You could be dealing with sloppy drunks one minute, and a devastating loss of supplies the next. The game doesn’t give you a clear Best Choice; it all relies on how your people see you, what you’ve done, and what they think you’ll do.

Related reading: For a different kind of tactics action on Nintendo Switch, check out Mercenaries Saga Chronicles. Our review

Captivatingly, this is best demonstrated through the fact that minor decisions can have deadly consequences. Take the example about drunkards earlier. If you make the wrong move, a harmless sod can turn into unnecessary death over a seemingly unrelated incident. Foolproof choices on paper can result in an unexpected rise in mortality rate that don’t hit you where it hurts until you’ve pretty much forgotten about them. That’s the cruel beauty of Banner Saga and it’s unforgiving environment; you start to wonder if a positive outcome is even possible, which makes your successes feel doubly rewarding.

This game is undoubtedly a dream on the Switch. Perfect for the console’s mobile nature, there’s just something soothing about watching your caravan trundle along when you’re on a commute of your own. On top of that, it tells one of the best stories that the console has seen in its relative infancy. There’s been no shortage of role playing games on the eShop, but Banner Saga is its own terrifying beast. Maybe it’s the interplay between the helplessness of the player characters and the almost paradoxical nature of being asked to make choices who’s consequences you can’t comprehend. But that constant fear that you feel when you’re the last thing standing between your people and annihilation? Walking that knife’s edge is undoubtedly exhilarating.

A Japanese film you should see: Destiny: The Tale of Kamakura