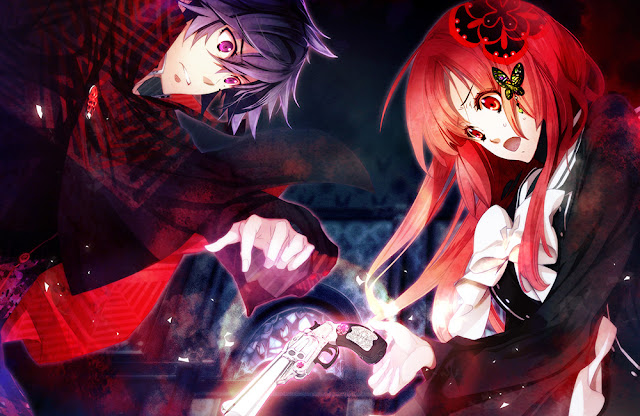 You wake up in the entrance hall of an elegant, old-fashioned manor, with no memory of how you got there or who you are. Your confusion and disorientation soon make way for fear when you find yourself attacked by a strange, minotaur-esque monster. As you flee, you run into a strange man in a red coat, and together, you manage to lose the beast.

It turns out that this man is in the same boat as you: no memories, no recollection of how he wound up in this place, and no desire to stay here any longer than necessary. You begin searching for a way out, but every door is locked and every window is seemingly unbreakable.

In the midst of your search, the monster from before shows up again. Just when death seems inevitable, a mysterious stranger wearing a fox mask appears at the top of a nearby staircase, pulls out a glowing gun, and shoots; the demon collapses and fades away, leaving behind a swarm of black butterflies and a shining shard of glass. Before you can say thanks, your mysterious saviour walks away. 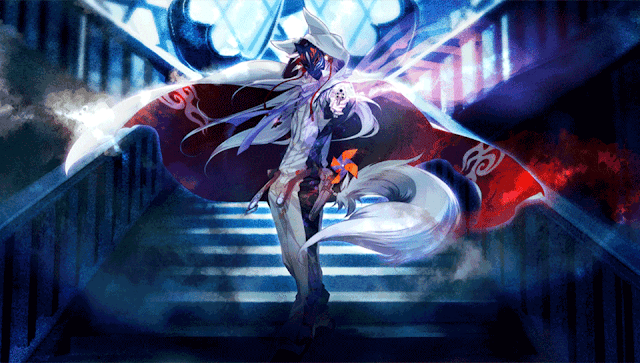 Soon, you run into three more men who are in the same situation as you and the man in red. Luckily, one of them knows of a safe area within the manor—any place with an abundance of white butterflies, as this wing has, seems to be safe from the monsters. With a kitchen, a living area, and a handful of bedrooms on a mezzanine floor, this area seems like a perfect hideout. Each bedroom has a nameplate, and so you each take these as your monikers in lieu of the names you can’t remember: you’re Beniyuri, the man in red is Hikage, and the other three are Karasuba, Kagiha, and Yamato.

As you discover, each of you carries a mysterious cell phone, and it’s through these that the so called “master of the manor” contacts you. It seems that the only way out is to collect more of those glass shards, like the one dropped by the defeated monster earlier, and use them to repair and old kaleidoscope. He also informs you—cryptically, as you’d expect from this sort of shadowy puppet master—that you can summon guns of your own, like the one wielded by the masked figure, through sheer willpower. With little other option, the five of you begin a quest to hunt the manor’s monsters and collect the shards they drop, that you might be able to regain your memories and leave the place once and for all.

So begins Psychedelica of the Black Butterfly, the latest visual novel from otome specialists Otomate. Like most of that studio’s work, this game is a romance laced in mystery and intrigue, though it leans toward the latter more than most. Psychedelica still has you flirting it up with a handful of different handsome bachelors, but rather than being the main “goal” of the game, these romantic routes are more side stories than anything else. 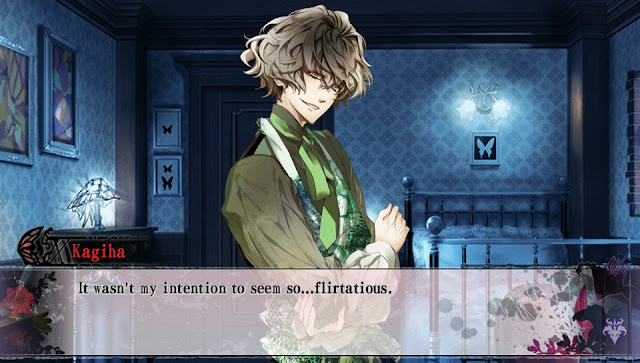 The main draw here are the central mysteries: what is the manor, who is the master, and why are you all here? It’s a captivating, edge-of-your-seat adventurefull of twists and turns—a lot of which I never saw coming. I’ll leave it at that, but suffice to say that nothing is quite what it seems.

In saying that, Psychedelica does seem to lack the depth that characterises a lot of other Otomate games. Compared to Hakuoki’s rich exploration of bakumatsu-era history, or Collar X Malice’s look at gun violence, or Bad Apple Wars’ study of authoritarianism and free will, Psychedelica of the Black Butterfly isn’t nearly as thematically weighty. It’s a thoroughly entertaining, engrossing story, but it’s not as thought provoking as what I’ve come to expect from Otomate.

Being a visual novel, the monster hunting isn’t something that you have much involvement in as a player—every hunt plays out according to the game’s branching script. That said, there’s a shooting gallery minigame at a few points throughout the story, in which you shoot swarms of black butterflies using the Vita’s touchscreen. These are somewhat optional, but playing them is the only way to get points that are needed to unlock “short episodes”. 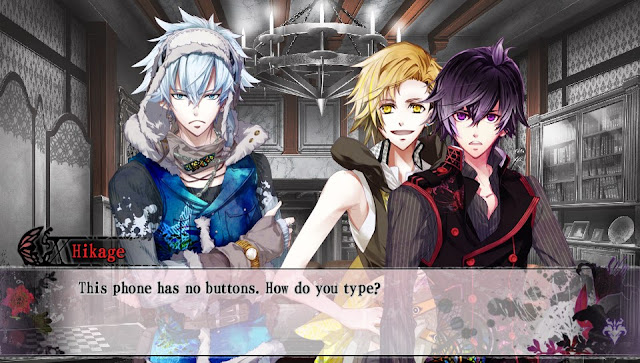 Short episodes are exactly what they sound like: brief, isolated scenes that relate to the main plot in some way, but aren’t vital to understanding it. Some give you an insight into what downtime is like for the five amnesiac monster hunters: playing cards, cooking together, and generally finding whatever ways they can to live some sort of life within captivity. Others let you get to know each individual better, and build those budding romances.

That’s where the romantic side of Psychedelica comes in. With the right combination of short episodes and choices during the main story, you can break off the common route and find love in the hearts of one of the men. In true Otomate form, these romances are by turns heartwarming, dramatic, funny, and bittersweet. The bachelors themselves fall neatly into the usual otome archetypes—there’s the tsundere, the tough guy, the soft-spoken charmer, and the flirtatious joker—and everyone will have their favourites.

That said, I had a hard time warming up to most of them because of how sexist they come across, at least at first. The knight in shining armour is a common trope in romance stories, but Psychedelica takes that to new extremes. Whether they’re well-meaning or bluntly sexist, each one of the bachelors treats it as a given that women (including your character, Beniyuri) are inferior to men and need to be protected at all costs. It’s tiresome. 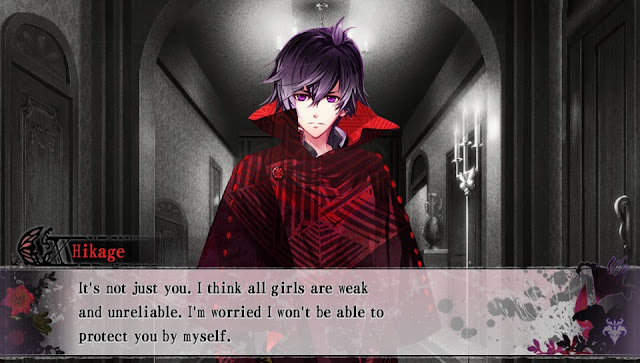 It’s odd to play an otome game where love isn’t the primary goal—in fact, Psychedelica’s main ending is one where you don’t romance anyone, and you can’t actually see any of the individual character routes to completion on your first pass through the game. Even so, such a setup works fairly well in this case; the main story is captivating enough to carry the rest of the game, and even without any full-blown love stories, there’s enough flirting and other general cuteness to keep those romantic feelings alive.

One thing that can’t be overstated is how absolutely beautiful Psychedelica is. Set as it is within an old manor, the game is rife with stunning gothic settings, from grandiose hallways, to old English bedrooms, to spooky studies and parlours. The character designs channel that same inspiration, but with the elaborate eccentricities that often accompanies Otomate artists’ work. Bold, vibrant colours play heavily in Psychedelica, feeding the dreamlike atmosphere that pervades the game—as you’d expect, given the title.

Likewise, the script is eloquent and poetic. Aside from being very enjoyable to read in its own right, it takes the feelings of mystery and romance to another level—such is the power of good dialogue. In saying that, another editing pass wouldn’t go amiss, because a lot of distracting errors still slipped through. 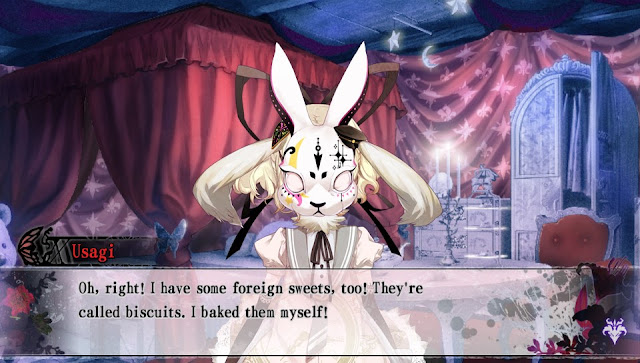 If you want an otome game that isn’t quite as dense as Otomate’s usual fare, you can’t go wrong with Psychedelica of the Black Butterfly. Between the mysterious thriller at the game’s heart and the romantic side stories, this is a game that kept me turning page after figurative page.