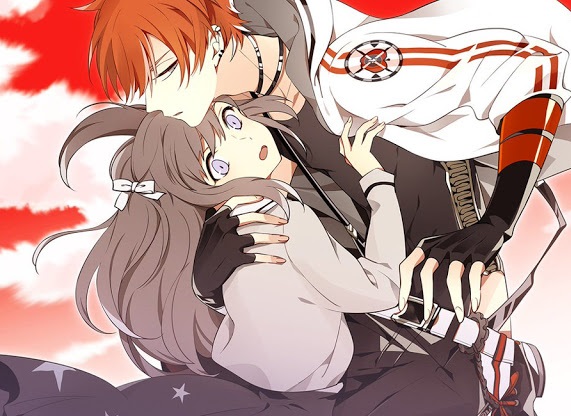 Rinka’s first day of high school started like any other, with a combination of excitement and apprehension. On her way to there, though, something happened and she blacked out. When she woke up, she found herself being welcomed to school by a strange, rabbit mask-wearing teacher called Mr. Rabbit who said that this place was NEVEAH Academy—a school for the dead. That blackout was Rinka getting killed.

According to the headmaster, NEVEAH is a place where those who died young can get a fresh start at life, quite literally. Successfully graduating means having your soul returned to life to begin things anew, with no memory of your life before or your time in this afterlife. However, “graduating” doesn’t just mean studying hard and passing tests; it means conforming to a lengthy list of rules and giving up your identity in the process. Being a “good apple” and following all the rules comes at the price of losing your memories and forgetting who you are, with reincarnation as the reward for absolute servitude.

For some, that’s a price too high to pay. In order to retain their identity, which would otherwise be slowly stripped away from them, they break the rules as often as they can: skipping classes, not wearing their uniforms, breaking curfew, and so on. This brings them into conflict with the Prefects, who violently enforce the law, but that’s the price they’re willing to pay for freedom and identity. They call themselves the Bad Apples. 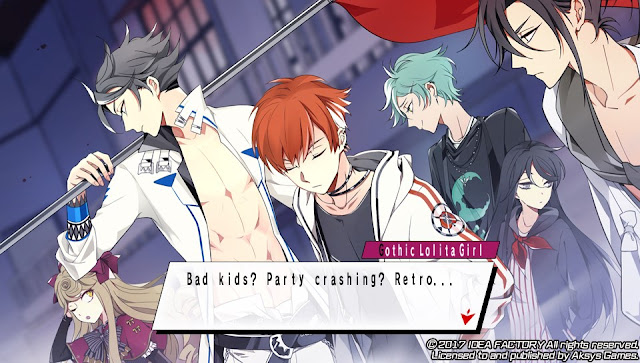 These freedom-loving delinquents have a bigger goal in mind, too. Among NEVEAH’s 100-odd rules are seven that nobody’s ever been able to transgress—the aptly-named Unbreakable Rules. For a Bad Apple, breaking an Unbreakable Rule is its own reward, but there’s one law that’s of particular interest: eating the forbidden apple, the punishment for which is expulsion. Nobody quite knows what the forbidden apple is or where to find it, nor what “explusion” actually means in this case. The Bad Apples’ theory is that it would let the expelled person return to their old life, and though its just an unproven hypothesis, the appeal is enough to make this a rule worth finding a way to break.

As a new student at NEVEAH, Rinka finds herself caught in the middle of a sort of war between the Bad Apples and the Prefects. Playing as Rinka, you’re forced early on to pick a side, determining whose perspective you’ll see the events of the game play out (and, because this is a dating sim, who you’ll get to charm). Do you the chaotic freedom of the Bad Apples and the chance to return to your old life, or the orderly servitude of the good apples and the promise of a new life?

You don’t need to think too hard about this premise to see themes of authoritarianism and punk ideology, with plenty of religious motifs to go with it. If you repent, your sins will be washed away and you’ll get to start anew, but at what cost? To be yourself in a rigid society that demands hegemony is a bold move, but is it worth the sacrifices and constant struggle that come with it? What role do faith and hope play in navigating the waters of grief and despair? At what point does religion become dogma? What, really, is the meaning of existence, if it has any meaning at all? These are the sorts of questions that Bad Apple Wars asks you to think about. 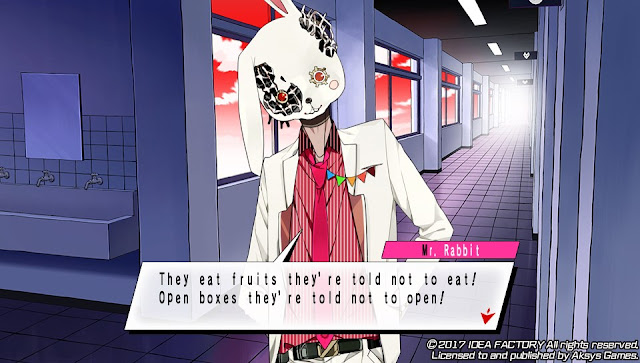 The bachelors themselves all have their own takes on these questions, coming from vastly different backgrounds and circumstances. Though some are more playful than others, each different route is, at heart, a tragic tale about lost loves and the lengths people will go to to protect those they care about. Otomate’s writers are always good at lacing bittersweet romances through fantastical plots, but Bad Apple Wars is particularly heartfelt and poignant.

It also has a petting mini-game. Historically the domain bishoujo games, Bad Apple Wars does a great job of showing how much more there is to a mechanic that’s often written off—in the West, at least—as silly, cheeky nonsense at best and utter perversion at worst.

In NEVEAH, touching another person sometimes you see their memories. Some people are able to read these more easily than others, and Rinka is particularly attuned to whatever aetheric energies drive this phenomenon. At certain points in the game, circumstances mean Rinka needs to touch whoever it is that she’s spending time with (for instance, to rouse them from sleep). When this happens, a “Soul Touch” event starts, in which you can “pet” various parts of the person’s body to prompt glimpses into their soul. At the conclusion of each such scene, you’re treated to a flashback to that person’s past, which build up over the course of the game to show the events leading up to their death. 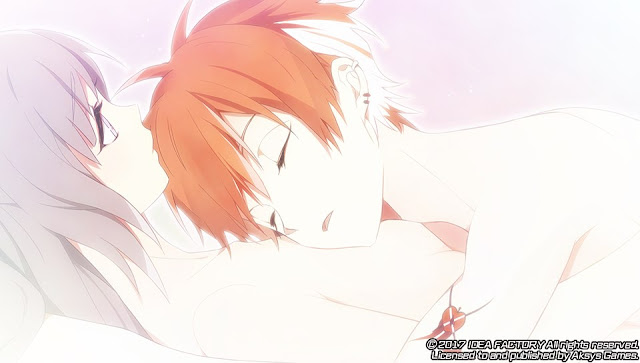 It’s intimate. There’s nothing sexual about it, but the whole petting game is intimate in a way that words alone couldn’t achieve. Stroking someone’s head, brushing their cheek, holding their hand—these are all intimate acts, and through them you get to witness them baring their souls. In certain Soul Touch events, the right petting choices lead to a particularly deep intimacy visualised through a nude embrace between Rinka and whoever her man is, not because they’re getting busy, but because they’re at their most vulnerable. It’s not suggested that they’re actually naked in these moments; it’s more of a visual metaphor, but it really drives home the point in a beautiful way.

This is a developer that’s no stranger to captivating romance stories, but they often seem almost tangential to the actual story, like an adorable, butterfly-inducing bonus attached to whatever the main plot is trying to achieve. Between the heartfelt character stories, sexy designs, and the deep intimacy brought about by game mechanics, I found Bad Apple Wars’ romance much more intertwined with everything that’s going on.

I didn’t feel like I was witnessing a sweet love story unfold before me; I felt like I was part of it, and that made every piece of dialogue and every CG that much more moving. From the innocent flirting early on to the love (and tragedy) found in the endings, to those Soul Touch scenes with their vulnerability and raw sexuality, Bad Apple Wars really wants you to fall for its bachelors. My biggest regret is that there aren’t more available suitors, because even the supporting cast had me enthralled—and that really is testament to the skill of the creators behind this game. Between that and the philosophical musings of the overarching plot, Bad Apple Wars hit every note I’ve come to expect from Otomate.