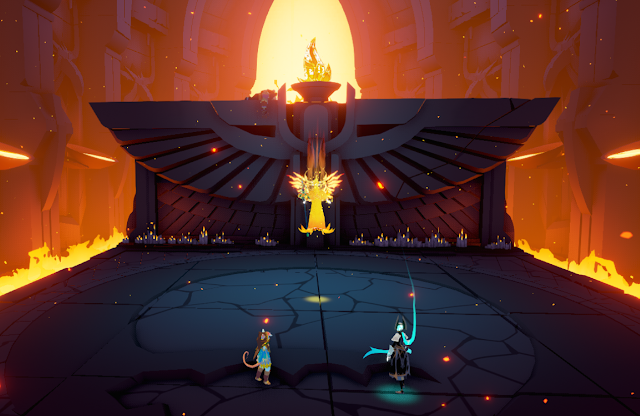 I’ve brought the end to the world more times than I care to admit, and that’s just today alone. Bright purple flames shoot of the ground and everything turns black. Before my very eyes, a tree of light appears. Actually, it is the tree of life and my homebase during these trying times. A kind witch, also made of a bright blue light similar to the tree, is my guide. No matter how many times I see the world end, or cause it to end, or fail to stop it from ending… there is always another chance.

Omensight is set in the world of Urralia. It is a world at the end of its life; in fact, there is only a single day left before The Void takes over and the entire place is obliviated. Enter The Harbinger, the player, me. Mythology states that The Harbinger appears at the end of days as the last attempt at preventing total annihilation. When The Harbinger fails at the end of the day, the entire day begins again in a Groundhog Day-like scenario. Except I can choose who I want to start the day with, thus setting off the morning, afternoon, and evening. Inevitably, the world will end and I will have to begin again.

So what will stop the apocalypse? Preventing the death of the Godless-Priestess Vera. It seems so simple, right? At one point in time I even witness the death courtesy of my abilities as The Harbinger. But it turns out, it’s not so obvious. It also turns out that everybody lies, so all I can do is gather information like a squirrel collecting nuts in the autumn and hope the picture becomes clearer. 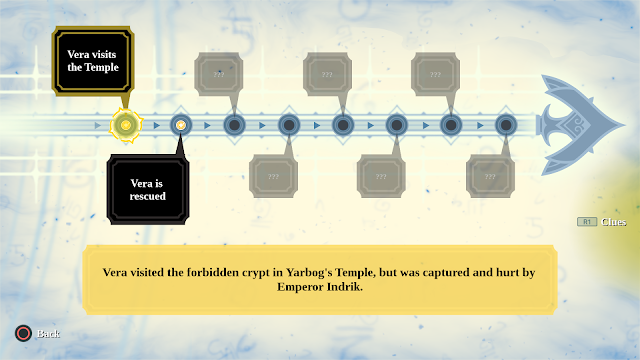 Properly incorporating time travel into a game’s narrative is no easy feat. It is also incredibly difficult to feature time travel in a rather linear story, and that’s what has been done here. And now I’m going to go off an a tangent, but please stay with me, as I promise it’s going somewhere.

I’ve mentioned my issues with chronic illness and pain in past reviews, and I have come to accept that this is part of me now. My cognitive abilities are often shot, with my short-term memory being practically non-existent. There is a reason I avoid most media that involves time travel (the MCU forced me into it but I’m not happy about it), because my brain can’t seem to grasp different times and place and theories at once. Yet somehow, this memory issue really isn’t a problem with Omensight.

Being fair, I do play on the easiest — or “Story Focus” — mode; my hands can no longer take even normal difficulties in action RPGs, so anything that allows me to actually experience titles I would otherwise miss is a big thumbs up in my book. Of course, there are some misses, such as the fact the easiest mode doesn’t have an auto-prevent fall option despite the persistent unmovable camera angles. 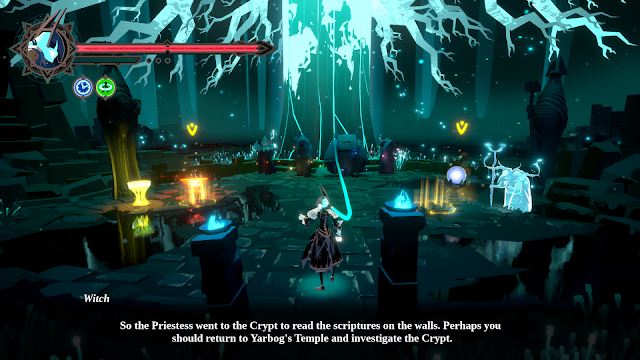 But back to the time travel. It does exist in Omensight as a major plot point. There are choices to make regarding where/when to go next. But there is always some sort of text or vocal cue to remind me of my current task or trigger memories of those which I’ve completed. There are no words to express the happiness I feel over this, and I cannot praise Spearhead enough for creating a content-rich title that keeps me heading in the right direction instead of repeating myself. Of course, the harder the difficulty, the less reminders you’ll receive.

On a slightly less positive note, some of vocal cues while in action are frustrating. I don’t need Draga telling me to hurry up or that I must hate fighting because I’ve stayed five feet back to smash some barrels. Since there is no actual time limit, I don’t like being told to hurry when there are things surrounding me, begging to be explored. It causes me anxiety. The funny thing is, on the times I do actually need to hurry and run across something, there is no difference in the tone versus when they’re saying it because I’m smashing barrels.

The tree of life is like the brain of Omensight, and the Witch is the heart. It is in the cool glow of the tree that the Witch gives her opinion on who I should visit next or reminds me where I can see the investigation to date. It is also here that I can bank my gained experience to earn new skills and purchase upgrades.

Most importantly, the tree is where your choices begin. The Harbinger chooses a character, rather than a place, to begin each morning. As you gather more information about either the character or the places you visit with them, you may need to play multiple days with the same character before getting a complete picture of the Godless-Priestess’ murder. Each of these characters are unique animals with different experiences; you’ll play alongside rebel leaders and obedient soldiers alike, and you won’t necessarily know who to trust. Wait, here’s a tip: trust nobody. 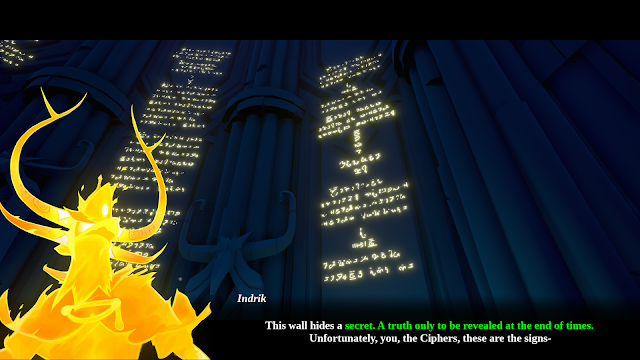 However, they have to trust you. You can use the omensight power which allows others to see the visions you have seen, and instantly know them as truth. The strange thing is, I *am* the omen. Aside from the glowing violent purple creatures called Ciphers, The Harbinger is the other sign that the end is near. It’s in the name, as “harbinger” can be defined as either a herald or a sign/omen. No wonder people stare at me and my gorgeous Miku-coloured hair.

Using my omensight power to have others believe me seems so logical: show them the truth, get their truth. However, I learned very quickly that won’t necessarily allow opposing characters gain your trust, thus leading to at least one more replay of that day. Imagine my surprise when I clicked on a lead character to play the day again and I’m given a message: “You have already played part of this day. Do you want to skip to the critical moment?” Um, YES, thank you for asking and saving me the physical pain of returning through the day I’ve already fought through.

But it doesn’t. Not entirely. It does bring me closer to what I would define as the critical moment, but there is that last strong of battles leading up to it that can kill me. It’s not really skipping to the moment, it’s skipping to the beginning of that part of the day. Harrumph. It makes boss battles more difficult than they should be because I become fatigued from repetition at times.

The gameplay is what I would expect from a game labelled as an action RPG. It’s a lot of using your skills to battle hordes of enemies at once time, with each area being capped off with a boss battle which is more difficult than the rest. The skills do well at incorporating the time travel theme, and I will often use The Harbinger’s ability to slow down time directly around her to help me regain my footing if I’m struggling. Here are a couple of minutes of my gameplay:

Omensight’s music is worth praise in that in enhances situations rather than distracts from them. The graphics aren’t perfectly smooth and contemporary, but rather in the style of the developer’s past title — Stories — and appears as though each scene could be at home in an illustrated storybook. I wish I could say more, but honestly, the game is really all about the story and the accessibility for me.

And wow, does Spearhead Games ever succeed at making Omensight an extremely deep, multi-layered narrative easily accessible for someone like myself. Thank you, Spearhead, for understanding that we aren’t all seeking a difficult pure-combat situation. The story flows while still making the same time jump every half an hour or so, proving to be more of a murder mystery than I could have imagined. There are problems I have with the title, such as issues with camera angles or ideas for improving Story Focus mode, but mostly I am very happy with how gameplay and narrative combine into a remarkable experience. And when I’m done, I’ll finally be able to sleep without the same darn day beginning again! 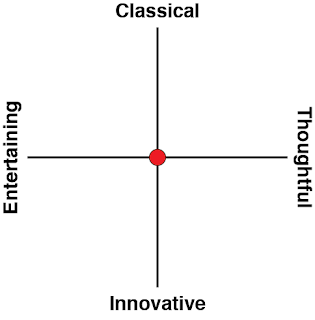 We have a release date for Code of Princess EX!