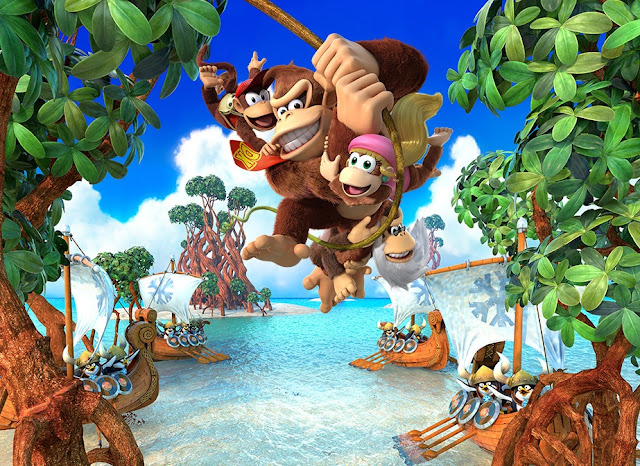 The Nintendo Switch has already outsold the Wii U. Small wonder, then, that Nintendo is committing to bringing the many high quality games from that train wreck to a console that people actually want to own; for many of them, these may as well be brand new games!

And while I would rather Nintendo looked at the games I really loved from that console (Project Zero: Maiden of Blackwater and Tokyo Mirage Sessions, please), I can’t deny that Donkey Kong Country is a popular franchise, and Tropical Freeze is well regarded within it.

What I find surprising, however, is just how minimalist this re-release is. There’s an upgrade in resolution from 720p to 1080p when the Nintendo Switch is docked onto to the TV, but then this is a game in which art direction is so much more important than resolution, and that, obviously, hasn’t changed in any way. 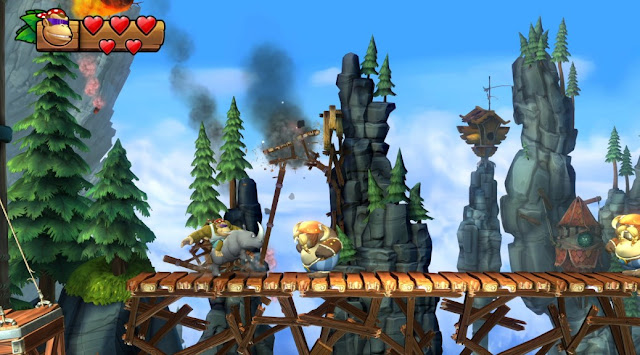 More excitingly, it’s now playable in a handheld form factor, and for someone who exclusively uses his Switch as a handheld device anyway, that’s the winning feature, much as I was more than happy to replay the original Donkey Kong Country Returns on the 3DS simply because then I could play it on the go. On the Switch’s own screen, the game looks lovely and bright, and I think the art shrinks down better than it blows up – small details become largely inconsequential, so you can instead simply let the vibrancy wash over you.

The only other “new” feature in this port worth mentioning is the loading times, which were extreme on the Wii U, and now have been cut in half, or more. For the kind of gameplay that a platformer offers, you do want to simply jump in and bounce around, so cutting those loading times out is actually a significant improvement to the quality of the game and what it offers.

But with other Switch ports of Wii U games, there’s been a lot more effort put in; Mario Kart has all the DLC, for example. The upcoming Toad’s Treasure Tracker will have new levels. I don’t think it’s unreasonable to ask a port to offer something additional to a game – especially in the case of the Wii U to Switch, where that previous console was killed off so quickly that most of these games are all quite fresh in our memories. There is one new feature that is exclusive to the Switch – and I’ll get to them later on in the review, but it doesn’t add anything to the game for existing fans of Donkey Kong titles. 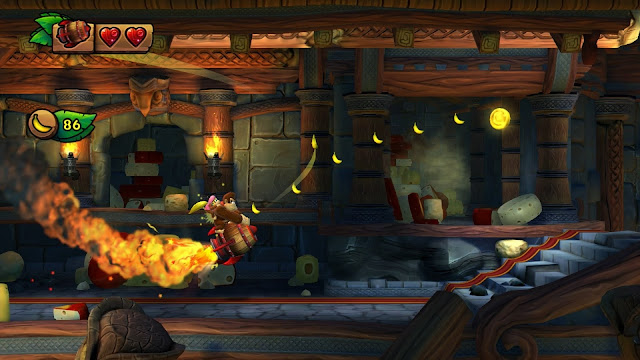 But putting all of that aside, the game itself is a rather lovely platformer that straddles the line between staying true to the original titles, and adding enough modern stuff to get rid of the irritations. Anyone who remembers playing those old Donkey Kong Country SNES titles will remember all-too-well just how horrible the level design was. Not so much the basic platforming, but the need to fall off every cliff along the way in the hope of finding a barrel or similar that would inch you closer to that 100 per cent completion. It was the most irritating approach to hiding secrets in a game I had ever played, and to make matters worse, the trial-and-error process was drawn out to a ridiculous level, because on top of everything else, levels were overly long and overloaded with places that secrets might be.

Tropical Freeze smooths over most of that. There’s still an obsession with secrets and collectibles, and I really do wish platformers would get rid of these damn Easter Egg hunts (in this game you’re looking for puzzle pieces), but at least most of them are hidden in such a way that careful investigation, rather than arbitrary risk taking, will help you track them all down.

Tropical Freeze benefits from tight, accurate, and precise controls, and a level design that is challenging, while also offering just enough give that you don’t need to be quite pixel perfect about it. Backed by a lovely soundtrack by David Wise, the game has those retro notes that will appeal to traditional fans of the Donkey Kong Country games. This is especially true when you run into the minecart levels and similar references back to the original trilogy, because for many reasons (not many of them good) the mine cart levels were the epitome of the Donkey Kong Country experience. Thanks to that improved approach to design, the game won’t frustrate as the older Donkey Kong Country titles can, so it’s all the charm of nostalgia without any of the pain. 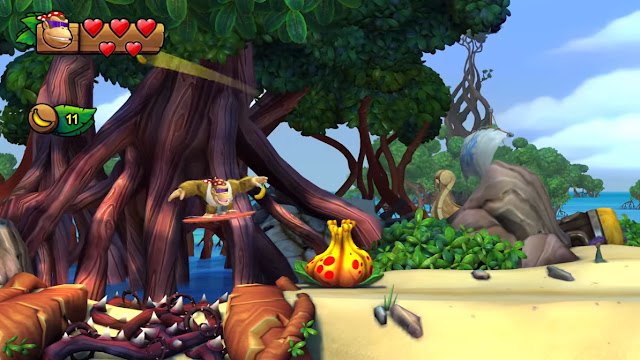 The other delightful thing about Tropical Freeze is the variety in the level design. In this game, Donkey Kong can drag one of the other members of the gang – Diddy, Dixie and Cranky – along for the ride with him. That partner provides a different special ability, be that Cranky’s pogo stick, or Diddy’s jetpack. The level designers have used these different abilities to great effect in giving you different ways to look at the platforming action from one level to the next. But it’s not perfect. The problem is that it’s quite possible to complete all these levels without having those supporters, which one assumes was done to prevent it from getting frustrating to be stuck with only Donkey Kong and then “stuck” and unable to make further progress. So instead these partner abilities are relegated to either hunt down secrets such as those jigsaw pieces, or make the tougher sections of a level slightly easier for you.

Related reading: Donkey Kong Country Returns on the 3DS is another excellent platformer. Our review

And that’s where Tropical Freeze has its counter-intuitive moment. If you lose your buddy and are left with just Donkey Kong, that means you’re probably struggling. So to then lose the abilities of your assistant means that the level gets even more difficult. I would have thought that if a player is struggling, making it slightly easier for them would have been a more accessible approach.

Donkey Kong Country: Tropical Freeze has an odd tone when it comes to difficulty. On the one hand, it has clearly been designed to be challenging, between the level design itself and the lengthy, complex patterns of the boss battles. It’s not Cuphead, but it’s not easy. On the other hand, from the presentational elements of the game, including the art style, it’s something that’s clearly been designed for the younger player – even in comparison to other Donkey Kong Country titles. I’m sure kids will still be delighted by it, but it’s a very traditional approach to difficulty for a game that tries so hard to be modern otherwise. 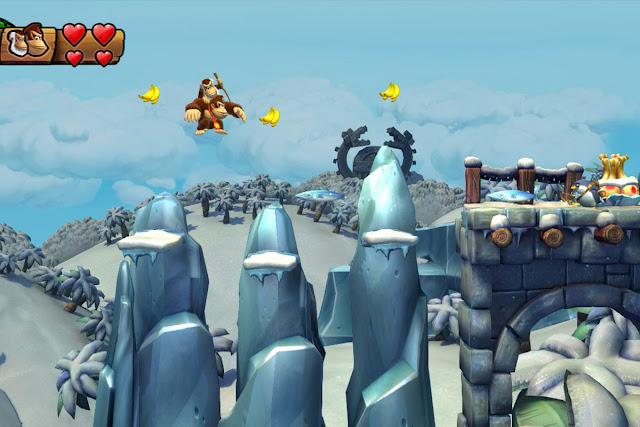 For the Switch version of the game, however, Nintendo has added optional features to make the game much easier. The important one is the ability to play as Funky Kong rather than Donkey Kong, who is basically so powerful he breaks the game. He has a set of abilities that make the game all but impossible to lose at, which is ideal for young children who would otherwise struggle at the game. This was the new feature that I mentioned earlier in the review and, as I said, while it is great for kids, it doesn’t add anything to the game for experienced fans of Donkey Kong. Funky doesn’t add a new way to play so much as walk you through the experience, and it would have been nice for Nintendo to find a way to also utilise Funky as an alternative character with different strengths of weaknesses for advanced players as well, in order to give them a different look at the game. In the absence of new levels, giving people the task of puzzling a new way through favourite levels would have been perfect.

Still, Donkey Kong Country: Tropical Freeze is delightful and easy to recommend. As I mentioned in my original review of the game, as flawed as I find them to be, I enjoy the personality and tone of the Donkey Kong games more than any other platformers out there. That still holds mostly true to this day. Though I now do turn to Shantae as my primary source of bouncy fun, I’ll always jump at the chance to get some more Donkey Kong on. I’ve greatly enjoyed the chance to play through Tropical Freeze again, though as one of the few that does own a Wii U, and a copy of that game I’ve got to also accept that I’m not really the target audience for such a vanilla porting effort.