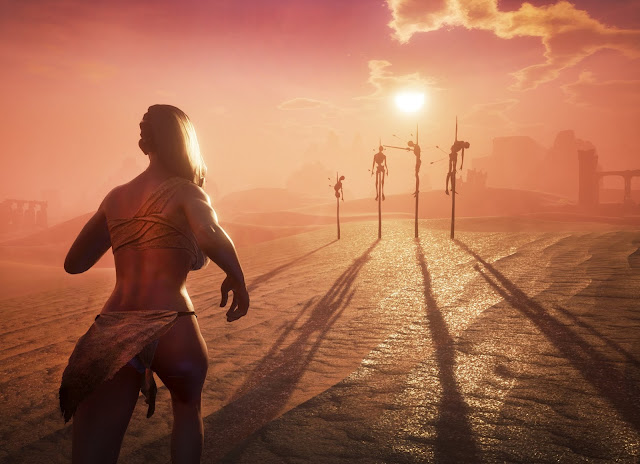 I love Conan the Barbarian. The sheer pulp fantasy of the brutally dark world sung out to me as a Dungeons & Dragons-loving child back when I first discovered the Weird Tales literary magazine, and with it the likes of Robert E. Howard (the author of Conan), and H.P Lovecraft.

Then I graduated to become a fan of the Conan films, and the expanded world that other authors have contributed to following Howard’s death. It’s all trashy, high action, pulp fantasy, of course. There’s no pretence in anything to do with Conan that those working with the fantasy and characters are producing works of the standard of Shakespeare, but as silly power fantasy, Conan really works.

And that’s why I expect narrative with anything to do with Conan. It doesn’t have to be brilliant narrative, but it needs to be more than generic dark fantasy with some nudity thrown in for kicks. There’s a specific approach to the kind of barbarian fantasy that Conan explores, and anything lacking that unique tone can’t, in turn, feel like something set in the Conan universe. What I got with Conan Exiles was… well, not much of a Conan experience.


Conan Exiles is instead one of those survival games, which has quietly become something of a sensation among B-tier developers and publishers, being something beyond what a typical tiny indie could produce, while being within the means of a developer lacking the resources to produce a competitive FPS, or “battle royale” title. Survival games are basically like Minecraft but more mature; players still need to collect endless piles of junk and use that to build themselves homes, farms, weapons, and other survival tools. The difference between Minecraft and these survival games is that there’s a stronger focus on combat, and other “mature” themes to prove just how different the games are compared to the “child-like Minecraft”. After all, nudity is awesome and only awesome mature games would have nudity, as the logic of the endlessly mature games industry goes.

And that’s exactly how you start in Conan Exiles. You create a character who has been nailed to a cross for execution, but who is promptly saved by Conan himself. Then for some reason Conan wanders off, leaving you all alone in the searing sun with nothing but your birthday suit. From that point your priorities need to be to find food, water, shelter, and construct some rudimentary clothing and equipment for yourself. Then you need to head out, chop down trees, break up rocks, and kill stuff for meat and better materials, which in turn can be spun into better stuff, allowing you to venture further, kill more stuff, and survive more efficiently.

It was around an hour into the game that I completely lost the feeling that I was playing a Conan game. Non-hostiles that you could talk to were few and far between, and while the enemy designs were pulled from the fictions of Howard and his successors, they didn’t do anything near enough to distinguish themselves from enemies that you’ve fought in RPGs and the like a million times over. There was the promise that there would be more to the game – you were told to “go look for signs of civilization,” for example, and the world was certainly large enough to suggest that there would be more to it than building yourself up some amazing architecture, but that promise is greatly overrun by the thousand survival tasks you need to deal with first. 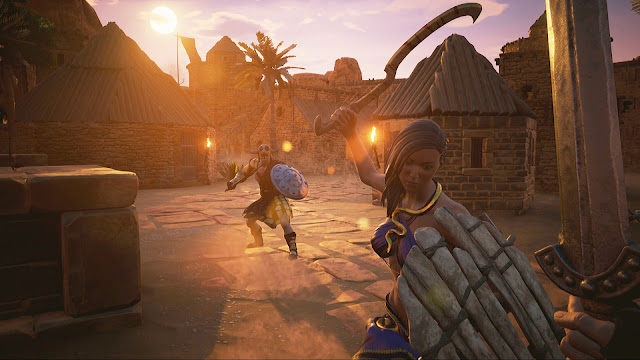 The game is enjoyable in isolation; the levelling up system, combined with the ever-increasing range of stuff that you can make and develop the resources for provides a gameplay loop that you can easily lose hours to without really realising how long you’ve been playing. It also works as both a single player experience (which is lonely but fitting for a game set in a far-flung wilderness hostile to humanity), and multiplayer (it’s oddly enjoyable to come upon an oasis of sorts and find it ringed by little shelters as a small town of sorts have sprung up).

The combat is quite enjoyable too. It’s very standard, in that you’ll be rolling out of the way of enemies, and waiting for them to finish an attack so you can dive in and counter attack, all while managing a stamina meter. We’ve seen that kind of combat system in dozens of RPGs at this point, and while Conan Exiles has a few too many bugs in its combat system for its own good, it’s generally enjoyable. This is especially true of the boss battles later in the game, where Conan desperately pins its hopes of getting back its pedigree.

After the first dozen hours or so of survival, Conan Exiles does develop a little more of a sense of structure, and the game starts to “feel” better for Conan fans. But that ramp up into something more interesting is paced horribly, and at that point the survival side of things becomes a formality, meaning the game loses the impetus that it just spent dozens of hours forcing on you. The tonal inconsistency and lack of coherence across the entire game is genuinely frustrating, and it’s hard to shake the feeling that this is yet another game in which a genre was forced on it in order to maximise sales, even though nothing about what the game wants to be really fits with that genre. 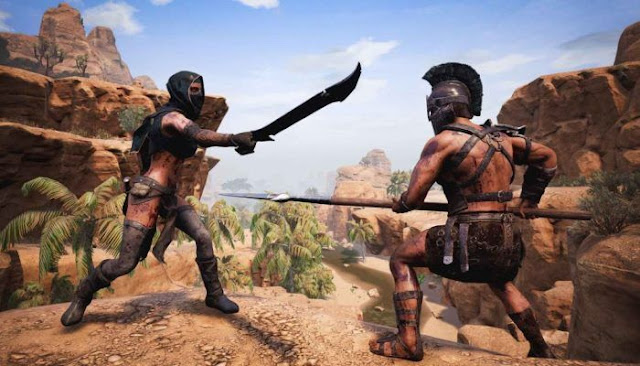 And as a side note, at no point does the game do nearly enough to put its ham-fisted attempts at “mature” content justice. Yeah you can own slaves. That certainly sounds like something you should throw into a game that can barely handle character development, world building, and narrative. The nudity doesn’t seem to be there for any reason than to play with dong lengths at the start of the game; the player could have started wearing a loincloth or similar with the same effect.

If you’re playing on public servers, you’ll also hit a point where clans and interactions between players becomes important. Belong to the wrong clan (or be a loner), and you’ll log in to find all your work trashed. Even if you’re online, you’ll encounter plenty of griefing. You could opt to play on a “PvE” server, where player-to-player interactions are limited to being non-hostile in scope, but there too you’re going to have to deal with behaviour that’s positively un-Conan like in nature. If you’re going to play this in multiplayer, the best way to go is to get some friends you know together and set up a private server.

Conan Exiles is enjoyable enough, but it does reveal some fundamental weaknesses in the survival genre; it’s not one that can be tuned effectively to storytelling, and that means that if you’re using a storytelling property, such as Conan, you’re going to need to exhibit a great deal over control to bring the necessary focus into the experience, and unfortunately the developers weren’t able to quite get there with Conan Exiles.