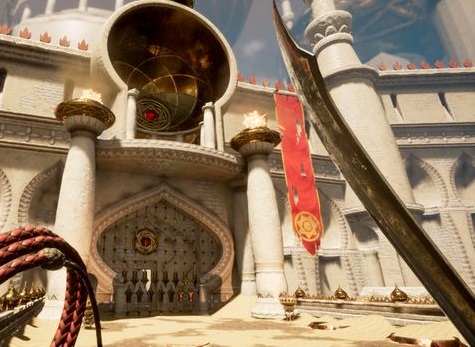 City of Brass is a roguelite FPS – i.e. it’s similar to games like Immortal Redneck or Ziggurat in that it features random level design and players venture deeper and deeper until they’re finally defeated, at which point they start from scratch all over again. What makes this one different is the theme; it’s based heavily on the 1001 Arabian Nights aesthetic. And as someone who has read 1001 Arabian Nights a dozen times or so over the years, this has me very excited.

And now we have confirmation that it lands on consoles very soon. May 4, in fact. A month away.

Related reading: An interview with the developers on City of Brass


Set in a mythological metropolis undone by its love of gold, City of Brass follows a cunning thief on a heist to obtain fabled treasure hidden in the heart of the opulent ruins. Armed with a bullwhip and blade, players will lash-and-slash their way through the legions of damned souls that haunt this legendary labyrinth while pilfering relics and other riches contained within its walls.

The game is gorgeous, and developed by the same studio behind the excellent Submerged and Epoch games. This one is clearly the most ambitious game to date through, and features some interesting gameplay additions that should go down well with the community. One such feature is the ability for audiences watching someone play via a stream to mess with their game. As per the press release:

To ensure the challenge is tailored to all players, City of Brass features a Blessings & Burdens system, which can make the experience much easier or do quite the opposite. These optional modifiers can tweak everything from player health and damage output to item costs, ensuring City of Brass is tuned everyone’s needs and desires. This system also extends to Mixer, Microsoft’s next generation streaming service, where viewers can interact with live-streamers by griefing them with additional enemy spawns or helping out with extra gold or healing items.

Sounds good to us. We’re very much looking forward to getting stuck into this one.