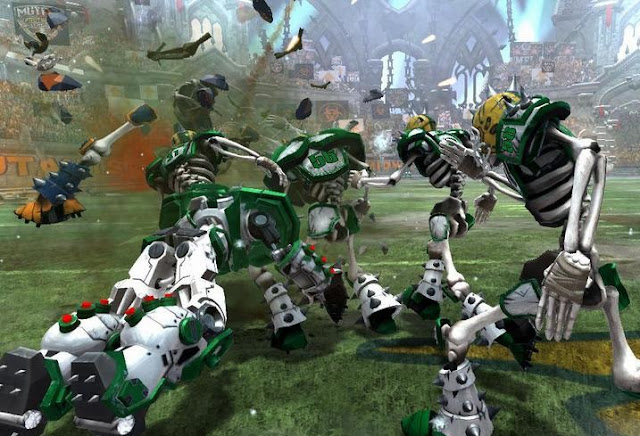 Do you remember SEGA Soccer Slam from back in 2002? What a game that was. Taking the sport of football (or soccer, or whatever you call it in your part of the world), it was an all-arcade, no-rules, 3-on-3 sports game that was about the big hits and the multiplayer hilarity.

Fast forward to today, and these days sports games are oh-so-serious. Every game’s about forcing your hands into the most ridiculous contortions in order to recreate every tiny moment that Cristiano Ronaldo has achieved as he prances around the football field. Every sports game requires you get a degree in it before you can hope to play against another player, and for those reasons, most modern sports games are absolutely terrible for the multiplayer experience, short of you and a friend both spending an equal amount of time learning the game so that it’s not embarrassingly one sided on the field.

Recently roaring into the gap left by the simpler (better) time of SEGA Soccer Slam has been a stream of pretty dull and uninspired homages to the arcade sports game. Hell, the attempt to revive NBA Jam managed to suck all the personality out of that franchise, and that must have taken some real doing. Nonetheless, I went into Mutant Football League thinking that things might be different and this one might do for gridiron what some of the classics like SEGA Soccer Slam and NBA Jam did for other sports – and indeed as a reboot of one of these arcade sports games from yesteryear, I had every hope for it.

Mutant Football League tries to be trashy (in a good way), but only manages to be trashy (in a bad way). It looks like it wants to blend Mad Max and Toxic Avengers together, and give people the ability to field teams of skeletons, psychotic robots, orcs, and other monsters. Then you get to kill the other team. Oh yeah. Each team has a bench, but rather than replace players that have become tired, in this one, you replace them as they’ve been killed.

It’s a fine enough premise, but executed horribly. For one thing, every time it aims for comedy with the various quips that pop up when referees hand down judgements or a player scores a touchdown, it’s less a case of “humour” and more a case of the most cringeworthy attempt to throw down a pun or two. This is accompanied by gyrations that I’m not entirely sure aren’t bugs that the development team just never bothered to fix. Throw in a try-hard, but blessedly infrequent commentator, and a horribly generic presentation, and Mutant Football League gets off to a bad start. 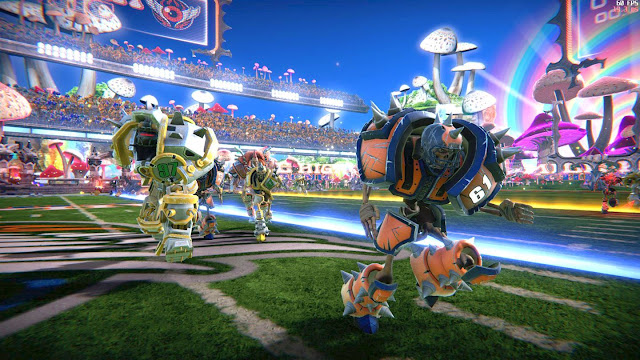 It gets worse once you try and play it though. As with any NFL game you’ll pick from a range of different tactics from a playbook, and try and get the player holding the ball more than ten yards towards the goal, thus resetting the tackles, or “down” count. If it played like the streamlined Madden game it appears like, that would be one thing, but it gets so much worse than that, and so quickly. The moment a play starts, the messiness of the action, set against the messy environment aesthetics becomes a real detriment, with an overload of clashing colours and poor character definition combining to make for action that is very, very hard to follow. Even when setting the pace of the game at its absolute slowest, I have trouble tracking what was actually going on.

It doesn’t help that the extra “arcade-like” moves that the game throws into the playbook break the game entirely. Each team has access to plays that involve weapons, or other deadly tools, designed to do more harm to the other team than to play football. Alternatively, it’s possible to bribe the referee to hit the other side with penalties for no real reason. These are all ridiculously overpowered movesets, with minimal risk in return for using them. And, sure, the developers probably want the typical Mutant Football League match to degenerate into wanton chaos. It’s probably in the game’s design document. But unlike SEGA Soccer Slam, where the action complemented the actually-quite-good football action, here, it replaces it, and it’s just not enjoyable. It’s possible to turn these things off in the menu, but you do that and you’re left with a barebones and personality-free football game.

There’s not a lot of gameplay to Mutant Football League, either. To the game’s credit, it is built around the multiplayer experience, just like the arcade sports games of old, and the unfortunate side effect to that is that as a single player game, there’s not much more than a series of linked matches to play and call the “campaign.” At least the opponent’s AI, on the higher difficulty settings, will work effectively in concern to the confusing action to make easy wins a real challenge. That being said, I can’t really criticise the game for giving players exactly what arcade sports games of old did. It’s just worth keeping in mind the limitations in what’s on offer going in. 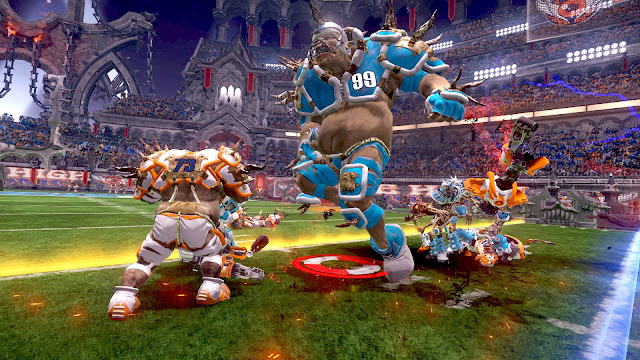 Mutant Football League is a cheap and poorly executed arcade sports game. I think the developers went in with all the right intents, because there really aren’t enough sports games being made for people who aren’t willing to put a major commitment into the game in order to be able to appreciate it on any level. But for all the good intentions this game needs so much refinement, polish, and a complete graphical overhaul that I can’t see myself busting this game out the next time I’ve got guests looking to play a game, either.