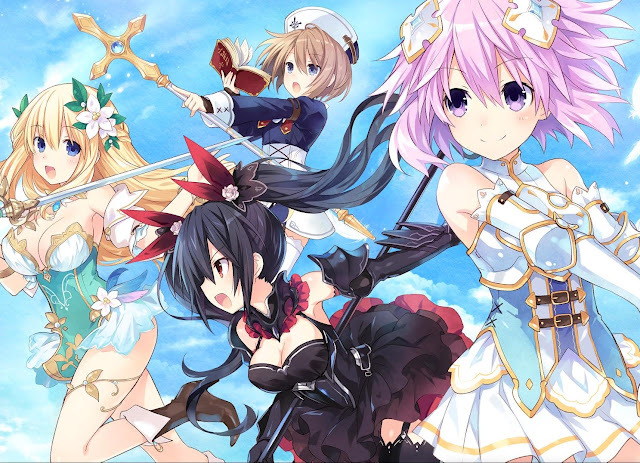 As an avid player of MMORPGs like World of Warcraft, nothing incites more fear in me than a franchise trying on a MMO skin for the first time. When the franchise is one that prides itself on parodying other genres, I’m even more wary.

Related reading: For another take on the game, catch Matt’s review of the PlayStation 4 original release

This isn’t because I’m the sort of person to turn my nose up at Hyperdimension Neptunia and scantily-clad offerings; quite the opposite. However, the danger with taking a chance on a parody is the uncertainty around whether a soft-gloved mocking of the original will ever be as compelling as its source material. Luckily, Cyberdimension Neptunia: 4 Goddess Online is as entertaining as I could have hoped, and then some.

An important thing to note right off the bat is that if you’re expecting the game to play like a traditional MMO, you’re barking up the wrong tree. For one thing, it’s actually a single player game that just appropriates the style of MMOs – you won’t actually be playing with anyone else. The game is set within the world of an online multiplayer game, yes, but all that means is that you’re provided with a neat fantasy universe that doesn’t make you think too hard about why it’s there. In fact, 4 Goddesses Online makes it explicitly clear from the beginning that the kind of narrative experience provided by titles like Final Fantasy XIV provides is going to be out of reach. 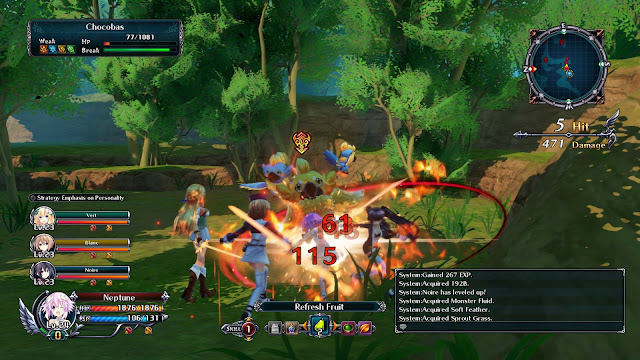 You’re in control of Neptune, one of the protagonists of the Hyperdimension Neptunia series. Your close friends – Blanc, Vert, and Noire – have gotten into the beta of a new MMO together, and you’re determined to level together and to solve all the mysteries that the game world has to offer. In case you haven’t already guessed what transpires, I’ll keep it brief: fetch quests, suspensions of belief, and a constant shattering of the fourth wall. In fact, Cyberdimension Neptunia spends much more time breaking the fourth wall than on coming up with any convincing reasons for the story of the MMO to progress.

That’s not to say that a total disregard for narrative storytelling isn’t compelling in this case. Actually, the complete irreverence that the game demonstrates towards developing depth of plot is endearing. A good parody doesn’t necessarily have to be biting satire in order to be entertaining, and it looks like Cyberdimension Neptunia has taken that philosophy to heart.

What the title lacks in serious chops, it makes up for in the kind of slapstick and low-brow humour that the series is famous for. There’s barely a scene that goes by without a mention of Vert’s impressive physical assets. On top of that, there’s also the usual punchlines delivered in the form of jokes about men roleplaying women in MMORPGs, the insufferable in-game couples, and characters with cringe-inducing names or affiliations. No target in MMO culture is safe from 4 Goddesses Online’s merciless lampooning, and I found myself in stitches almost every time. 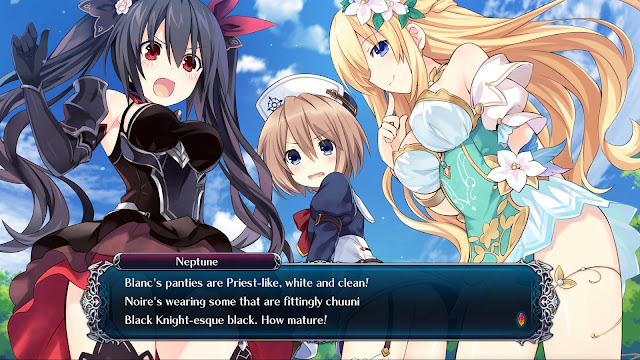 There are those who will feel like the jokes are a little cheap, and that’s fine, if not expected. The amount of fanservice in 4 Goddesses Online is typical of the series, but perhaps even more pronounced in this title because of the character-focused approach to what passes as storytelling. You learn about the world as Neptune and gang stumble through it without much rhyme or reason, and part of that idle exploration means that dialogue scenes are the most compelling way to move the plot along as you traverse each new location. The reason for the chatter is likely because maps are sparsely populated and overly simplistic compared to traditional MMOs, but they serve their purpose in what is really a single-player hack in slash in all but name.

Combat is where the above observation really shines through. There’s brilliant colours, provocative armour, enemies with unreliable hitboxes, slightly janky blocking, and a mess of special effects all over the screen. Again, this is hardly the norm for MMOs – usually you’ve got damage numbers and effects clearly and neatly partitioned so that players can track their performance or at the very least, to follow mechanics.

There’s absolutely no need for any sort of mechanical knowledge in 4 Goddesses Online; if you move away from the enemy and out of its range during a visible charge-up period, you’ll be safe. It’s not challenging by any means, though making sure that your AI are set to a playstyle that suits their personality is essential if you want to feel like your party has some sort of cohesion in battle. Sure, Noire will make a big deal about having the right team composition for dungeons, but it’s mostly superficial. 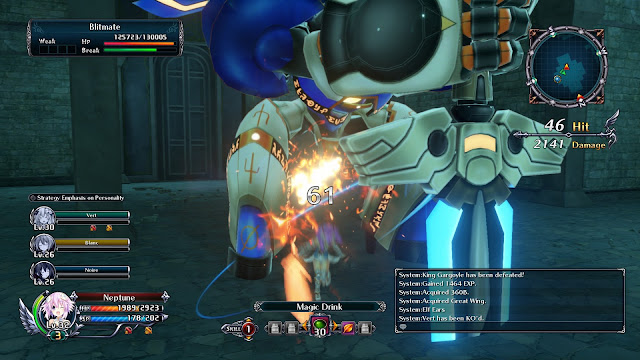 The most egregious use of the MMO world and its tropes in this title, however, is the game’s constant breaking of the fourth wall. You’ll be reminded in every line of dialogue possible that Neptune and her friends are players within an MMO. With each reminder, you’ll feel more and more like an observer instead of a person who’s playing through a game that is essentially about spectating an MMO that the in-game characters are in.

If that’s confusing, then congratulations – that’s part of the charm of 4 Goddesses Online. The characters will have conversations as their “real world” selves, often directed at things in the game, which only serve to reinforce that for all intents and purposes, the player is just an extraneous meat sack along for the ride. When combined with the commentary that the game delivers about shut-ins and people who devote their entire lives to the games (even to the point where guilds make up and break up over player relationships), it all comes off as a knowing wink and nudge about the dark side of online gaming communities that turn MMOs into veritable addictions.

There ends up being a lot to unpack about Cyberdimension Neptunia: 4 Goddesses Online, but to compare it to any other title out there on the market wouldn’t be adequate preparation for those who are deep-diving into the series for the first time. Sure, you could play a “real” MMORPG that purports to deliver a seamlessly immersive experience for those within its world. But if you’re really after a taste of something different, take a walk on the wild side with Neptune and the CPUs. After all, no other MMO has all its flaws on display quite like 4 Goddesses Online; if you’re going to sit through toxic players, boss fights, and an unfathomable plot, you might as well do it with cute girls who acknowledge the genre’s flaws and enthusiastically attempt to make them entertaining.

Code of Princess is coming to Nintendo Switch! In HD!