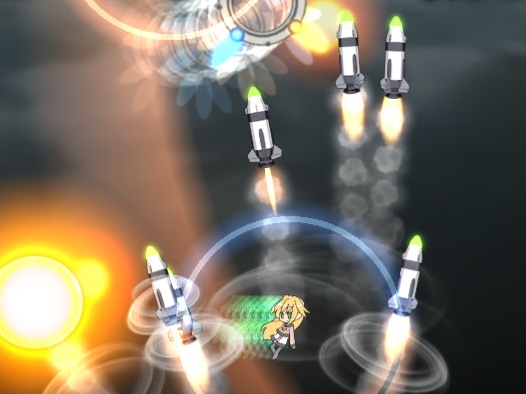 I’m going to be honest here and say that I think I’m a little out of my depth reviewing Acceleration of Suguri 2. It’s a sequel to a spinoff to a bullet hell shooter developed by the prolific doujin studio Orange_Juice (who you might know from the zany digital board game 100% Orange Juice) which is all about one-on-one competition between the fans of the aforementioned bullet hell shooter. I can only imagine that everyone interested in this game already has this game. I’m writing this as an outsider, who a few days ago booted up the game and had completely no idea what I was doing. If you’re reading this, here’s your chance to decide if you want to be part of a very niche but supportive and passionate community.

Related reading: The Touhou series has a similar game to this on PlayStation 4. Clark’s review of Touhou Genso Bullet Ballet

Acceleration of Suguri is a combat game between two players: the goal is to reduce your opponent’s health faster than they can do the same to you, and this is done by creating your own bullet-hell style attack patterns while dodging your opponents’. Despite the fact that this looks like a shooter from the screenshots, it plays very much like a fighting game. The meat of the competitive modes lies in feints and combos, counters and mixups. There’s a glossary of technical terms unique to this game which developed organically, just as similar lexicons emerged for other competitive fighting games. All this means that Acceleration of Suguri has a learning curve that’s near vertical, but its systems are certainly rewarding while mastered.

I should clarify too that “bullet hell” here is used loosely: there is little commonality between the original Suguri game and something like Perfect Cherry Blossom, for example. Instead of slow bullets which force the player to duck and weave with precision, Orange_Juice’s shooters tend more towards fast moving bullets which come from all directions, requiring the player to dash around their assailants. There’s also an interesting interplay between projectile types: laser, ballistic and physical – the dash command makes your character immune to laser fire but fills a “heat” gauge, which multiplies the damage you take. Ballistic weapons meanwhile tend to be homing missiles that are hard to dodge but can be destroyed by laser fire, while physical attacks are a strong way to punish players who overuse dashing. The result is something akin to high-speed rock paper scissors, predicting the opponents’ move while responding with your own, avoiding attacks and punishing moments of weakness. 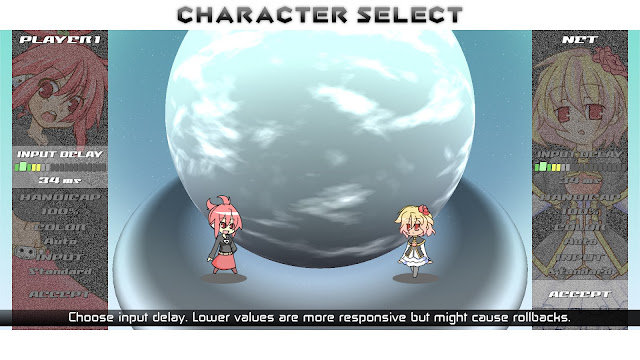 Acceleration of Suguri 2 is decked out with an eclectic cast of characters spanning the range of Orange_Juice’s prior works, and they are all drawn with a soft pastel style which has become something of a calling card for the studio. Characters exude personality both from their designs and their fighting style, with each character feeling unique and bearing distinct strengths and weaknesses. It’s best to start by trying each one and then picking a main, figuring out how to play them and what your favourable and unfavourable matchups are. You should jump into the game’s arcade or story mode only once you’re confident with your chosen character, and don’t even think of heading online just yet.

What results is an interesting game with competitive depth, which is a shame because the teaching tools for new players just isn’t there. There’s a menu explaining the various different moves and what situations they should be used in, but there’s a lot of text to be taken in for new players. There’s a training mode so you can figure out what your various buttons do, but without hints or tips on each character (it would’ve helped if characters came with labels such as “offensive”, “ballistics expert” or “long range specialist” for example) it’s easy to start playing but hard to know you’re playing right. Pair this with an in-game AI which is really difficult even on easy and you have a game which all but turns away its newest players.

If you’re the kind who’s willing to hit the books and watch some gameplay videos, you’ll find that there’s a robust and rewarding metagame in both the online and offline scenes. The AI is challenging but beatable, and successfully completing an arcade run on Hard feels like a real achievement. The story mode is also there, but there’s a pre-existing universe built largely in Orange_Juice’s previous games and if you don’t already know who the characters are, the story isn’t going to do much for you. The movesets are also not as diverse as most competitive fighting games, so some matchups do become more a question of “can you execute this one strategy” rather than “what options do you have against this opponent”. 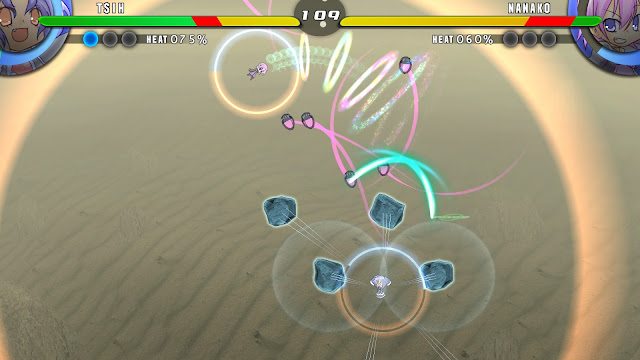 Acceleration of Suguri 2 succeeds by having the complexity of a fighting game while rewarding quick thinking, reaction speed and dexterity. Behind a rather gentle looking exterior is a punishingly difficult game that pits bullet-hell fans against each other. If you’re new to the scene, this perhaps isn’t the best introduction (definitely check out the original Suguri game to get accustomed to the core mechanics!) but if you’re burnt out on fighters and want to try something different, Acceleration of Suguri 2 is a well made and compelling foray sure to scratch that competitive itch.

We have a release date for all the countries where Gal*Gun 2 won’t be banned!