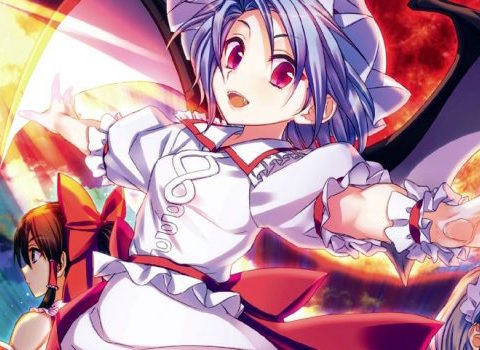 The term “bullet hell” is an accurate descriptor for the absurd number of bullets exchanged in hardcore 2D shooters. Franchises like Touhou have garnered reputations for the sheer technical prowess one needs to manoeuvre around projectiles that envelop the screen like hundreds of fireworks set off for minutes on end. At the same time, that word “hell” belies the idyllic quality of witnessing what resembles a calculated (albeit demented) dance recital.

Of course, these games are of minimal value to those without twitch reflexes and an aptitude for prediction or pattern memorisation. It’s no wonder that this subgenre is petite where sales figures are concerned and hasn’t seen a huge commercial following outside Japan. That high skill ceiling doesn’t mean these games have to be content resting on their laurels instalment after instalment, however. Touhou Genso Rondo: Bullet Ballet spins a franchise nearly 20 years old off into uncharted territory that should render it a touch more palatable to non-fans of bullet hell games, simply because it’s so distinctive.

In Bullet Ballet, players are neither firing at heart palpitation-inducing bosses for minutes on end nor traversing levels for power-ups to dispel swarms of foes. Instead, it’s all about one-on-one duels. The cutesy avatars of Touhou become extensions of the player’s will, dictating the pace of a match through sheer force. Whatever you fire, be it conventional artillery or special attacks, the opponent is bobbing and weaving to something more profound and open-ended than pre-programmed assaults. The result is a little less like the ballet mentioned in the title (although a match between two expert competitors can indeed live up to that level of sophistication) and more of a b-boy dance battle in the streets. The reflexes Touhou players have honed for years aren’t going to suffice; players now need ingenuity and the ability to dance to unpredictable rhythms to survive. 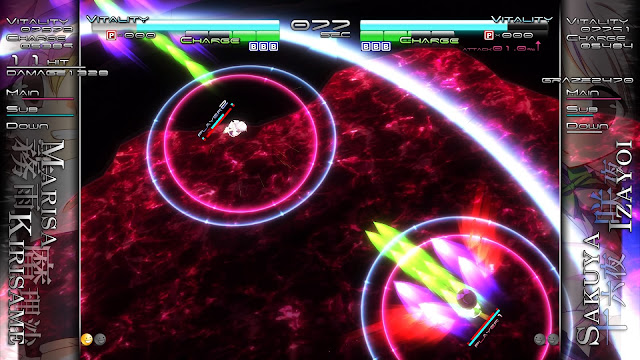 So yes, with this game morphing into a legitimate contest, Touhou has in essence become as much of a shooter as it is a fighting game. It’s downright poetic that with Bullet Ballet Touhou has assimilated the elements of fighters; ZUN, creator of the series, originally went to college with the dream of composing music for said genre but instead wound up producing one of his country’s premiere dōjin franchises. That was a blessing in disguise, as the IP went on inspire innumerable fan efforts, but this particular outing brings the man’s ambitions full circle without compromising the essence of what his work represents.
If we’re being technical here, the developer has actually licensed G. rev’s rather obscure Senko no Ronde series and adapted those mechanics to be suitable for another property. Due to the scarcity of those titles, however, Genso Rondo’s version of that battle system might as well be peerless and is nothing to scoff at. I would even argue enemy fire is easier to decipher in terms of colour and presentation than some of the Senko no Ronde games, which is absolutely crucial to crafting a fair bullet hell experience. In any case, this system is best summed up as an arena fighter that cherishes precision over complex button inputs. Matches are chopped into best of three rounds like most games since Street Fighter’s heyday.
The game even sports the super attacks you’d expect of a traditional fighter (or in Touhou-ese, Spells). Activating them changes the perspective to that of a regular 2D shooter and essentially bestows the user with boss powers. Yes, that really does mean the freedom to rain down hundreds of bullets that can be nigh on impossible to evade. The shooting elements complement the experience spectacularly and pave the way for mechanics you’re never going to see in the latest Mortal Kombat. For instance, players are rewarded for flirting with death; just gently grazing bullets launched by the opponent amplifies the avoiding player’s threat level with an increased meter (of which there are several; this is not an entry level shooter by any means). Genso Rondo features nearly a dozen playable characters from past titles, each with their own style. One woman launches massive shots with tremendous range but lowly speed. They also coat large portions of the screen, causing dodging to be a test for both parties. You can expect numerous intelligent tradeoffs to make character matchups endlessly intense. 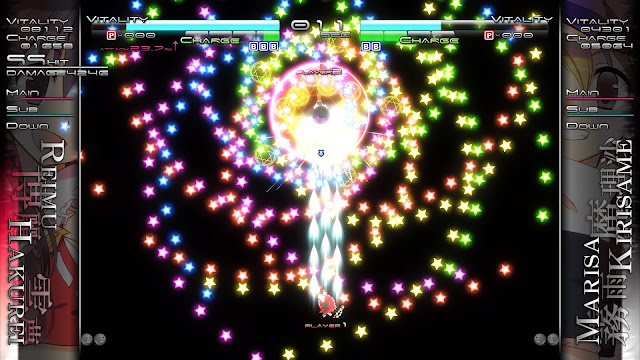 I can’t reiterate how seamlessly these genres integrate enough. The developers have even implemented melee attacks at close range, which drastically alter the mentality of zoning since closing in on a foe can cripple an assault. Melee attacks are then topped off with a clever rock-paper-scissors-esque mechanic that permits the defending party to stand a chance. Throw in options for dashing and considerable but manageable movesets for each character and you get confrontations with fellow human players that elicit euphoria unlike anything else.
While Bullet Ballet boasts several solid modes, the story mode is clearly the one emphasised. It follows the format I wish fighting games would remember exists. It paints each individual character a clear motive (regardless of how inane that may be), grants that person conversations with each opponent before a bout, and delivers a lovably asinine resolution to their not-so-epic sagas. Granted, these stories are…not the easiest to parse. If you’re no Touhou aficionado or lack understanding of Japanese culture (particularly pertaining to shrine maidens), your hand may well wind up on your cranium assuming scratching position. If you’ve got an open-mind, however, certain eccentric qualities do shine brightly enough to be decipherable. These tales do make a point of playing up comedy more so than the main series.
If you can’t appreciate the light-hearted gags, the artwork that accompanies these sequences is downright gorgeous and hammers home one more reason why the series took off besides the gameplay. That would be the character designs, which have been converted into fan art literal millions of times over the years (yes, let the fact that a bullet-hell series achieved that sink in). The style implemented here simultaneously pays respect to the franchise’s indie roots with adorable chibi renditions while offering high-quality artwork suited to the PS4. The accompanying tunes evoke the atmosphere of a particularly whimsical late 90s anime produced to perfection. 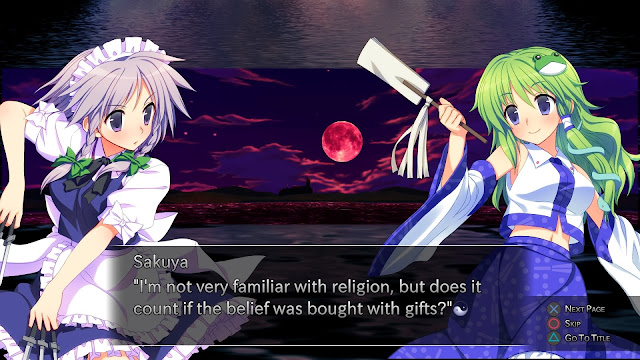 As much as I’ve buttered up the west’s latest Touhou for its adoption of the Senko no Ronde series’ spectacular mechanics, though, the title is not without defects. The most grievous is the tutorial mode, which begins delightfully enough as two gals exchange information through silly banter. This segment becomes so longwinded it’s self-defeating, however. It neglects vital techniques, condenses complex points into seemingly throwaway sentences, and ultimately fails to convey information coherently.
If you want to brush up on the information in-game, you’d best brace to skim through line after line. I suppose these games are aimed at veteran players to begin with, but even so, any newcomer learning the ropes will feel the temptation to unceremoniously lob their DualShock 4 across the room. It saddens my heart to say a soulless menu featuring button combinations would have been more practical. I heartily recommend every player seek out an online guide instead.
The online infrastructure is best described in Newspeak as doubleplusungood. Searching for rooms is an arduous process that demands borderline button spam. Being booted out of a room after one match is particularly undesirable because, let’s face it, this is game is not going to achieve Street Fighter V levels of online activity. Seeing as the game has DLC and the potential for online updates, however I’m hesitant to harp on too much, especially because these battles are so stellar they arguably warrant the obnoxiousness in the meantime. If those don’t sweeten the deal, the multitude of leaderboards for each mode should render the single player campaign positively savoury. 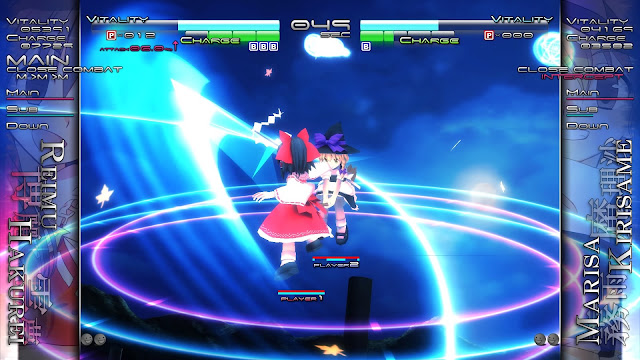 Calling Touhou Genso Rondo: Bullet Ballet accessible would be a joke in poor taste. Even so, there’s never been a better time in history for those upset with conservative shooters to set aside all preconceived notions and just experiment. Touhou deserves to be praised equally as a bullet hell and a fighter, performing like almost nothing else on the market. This, ladies and gentlemen, is bullet heaven.