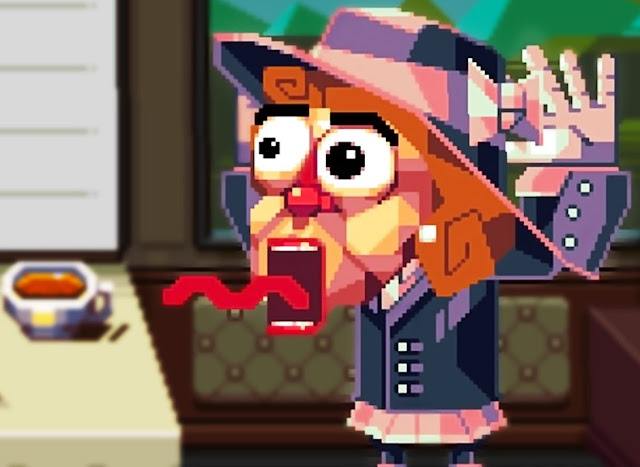 Throughout history, human cultures have attributed supernatural powers to the spoken word. You might be familiar with it yourself if you ever practised the act commonly referred to as “prayer”. Humanity has been pondering the power of the spoken word in all sorts of ways, but I tend to gravitate to the approach of one of my favourite 20th century thinkers, the Monty Python group. They famously tested the extreme peripheries of the spoken word’s power with deep statements along the lines of “I fart in your general direction” and “your mother was a hamster and your father smelt of elderberries”.

Into this foray steps Oh…Sir! The Insult Simulator, a game blatantly influenced and inspired by the Pythons (and yes, it credits them for that). No, Insult Simulator does not provide deep and meaningful insight into the power of the spoken word. What it does deliver, though, is joyful play along the Python trajectory. It lets you be the Python you always wanted to be, and throw the sauciest insults you can come up with against virtual characters and human opponents. It does so by offering a sentence building competition arena between two players; it just happens to be that the competition and the sentence parts revolve mostly around Flying Circus grade insults.

[At this point I would like to break for a minute and thank the editor for trusting me with reviewing a game dealing with insults. No doubt this is the result of my vast experience in insulting with extreme prejudice.] 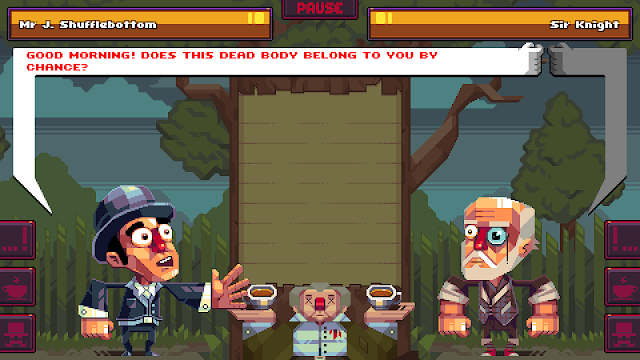 In terms of mechanics, Insult Generator has its two competitors picking sentence parts from a common pool in order to generate an insult. Insults start with a subject (“your grandmother”), and then can evolve through the players connecting verbs, adjectives, or conjunctions. All is fair in love and insults, but one does need to ensure the insult one aspires to create will be made of sentence parts your opponent wouldn’t grab first. One also needs to be quick, because the clock is ticking on each turn. That deeply insulting insult you’re working on will be of no use if you get your grammar wrong or fail to finish your sentence!

Each insult simulation session will have you pick a character from a limited roster (with several more to unlock as you play). Each character has sensitive weak spots opponents can direct insults at for extra impact, thus affecting sentence creation choices. Additionally, each round takes place under one of a few available scenarios (you start with three and unlock a few more) that set the scene and also imply what insult themes will carry more weight.

While the game is called “Insult Simulator”, one need not concern themselves with the likes of F-bombs here. Instead you get insults directly borrowed from the Pythons, such as the aforementioned elderberries classic or hamster based attacks. There are also more modern variations along similar themes, such as “your aunt still uses Windows Vista” or “your sister sucks at Overwatch”. The latter goes to show how some of the phrases generated while playing Insult Simulator cannot qualify as insults, or may even be regarded as compliments (that is certainly my opinion with regards to certain highly successful MMOs). It’s all part of the game, and your insults will be assessed for punch accordingly. That is to say, not only will you need to come up with a grammatically accurate sentence to hit your opponent, you will get much more the punchier the insult gets. 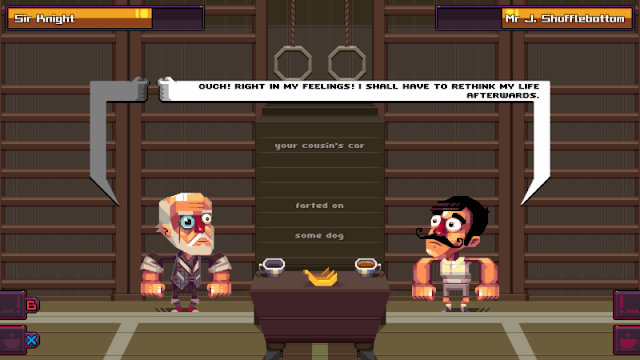 Combine a sassy insult with other factors, such as repetitively targeting the same subject, aiming at a character’s weak spot, or making the most of the current scenario, and you will significantly raise your chances of winning. Yet, at its core, Insult Generator is a game about building “legal” English sentences no matter the meaning. This means that one can deploy tactics unrelated to insult potency, such as going for phrases such as “and” ahead of the opponent so as to prevent them from constructing long sentences. Point being, there is a surprising amount of depth in this game once the thick cover of humour is penetrated.

Since I mentioned winning, I will go ahead and admit to the noobishness of losing match after match at the beginning. Part of it is the result of being an accredited noob (I’m sorry, but those Joy-Cons were not designed for actual human hands), and part of it is the result of the game balance receiving the attention it needed: mastering the ability to craft a worthy insult out of the sentence parts on offer at a glance, while trying to estimate what sentence parts your opponent would go for, but also figuring out whether to gamble on the two hidden sentence parts at your disposal, all under time pressure – it ain’t easy to get to heaven when you’re going down.

But it’s fun! And it’s that type of fun that made me want to have another go, and another, rather than that type of loss that is way too frequent and has me deleting the game from my drive and going back to the safety of the familiar. Life’s too short for intentionally frustrating games, but games that frustrate just enough so as to drive the player to improve are very much worth living for – and Insult Simulator, in my humble opinion, belongs firmly with the latter. That said, figuring out how to beat the system works just as well if not better. 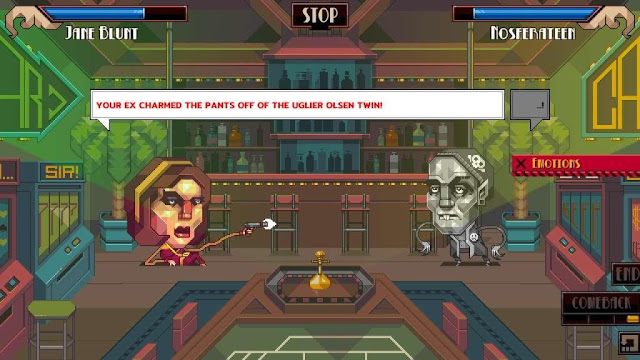 It is practically blasphemous to play Insult Simulator with the Switch docked. The game is clearly best experienced on the small screen, and doesn’t even make use of the space on offer by a contemporary TV; for example, large insults that could be easily read on a TV end up scrolling (and are thus not so easily read).

There is an exception to this rule, and that is the party game factor. Insult Simulator is awesome as a two player game (I played locally both locally and online, where one can either wait for elusive strangers or create a room). Insult Simulator proved even better as a family game: playing with my son was co-op heaven. He never gets his buttons wrong, and together we structured superlatively insulting gems of sentences! I suspect that, in addition, he probably learned more about the legalities of English grammar than he would through years of schooling. Because play learning is the best, and that’s close to being a scientific fact. [To clarify, there is no co-op mode; we simply discussed his moves together when he was playing single player.]

Eventually the charm of the game’s scenarios and limited number of characters wears off; one gets the point. Perhaps Insult Simulator won’t be the game you play longer than Persona 5, but I have no quarrel whatsoever with games that know what they can deliver and avoid overstaying their welcome. Insult Simulator is one such game, and it is no insult to say I had much fun with it.