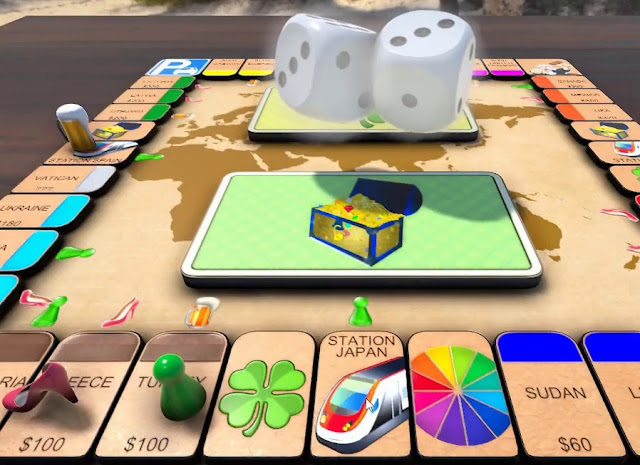 I really wish I hadn’t already declared the worst game of 2018, because there’s already genuine competition out there for that title, as Rento Fortune lands as a “premium” game on PlayStation 4. It’s a galling, trashy, unapologetic clone of Monopoly… which is all the more ridiculous because if you are a fan of Monopoly there’s already a perfectly competent version of the real game sitting there, on the PlayStation Network, with a perfectly reasonable asking price.

So what is Rento Fortune? It looks like Monopoly and plays exactly the same way. You roll dice, you move around a board, you buy unowned properties and then charge rent when people land on your properties. Once you own a full “set” of two or three properties (they’re colour-coded), you can start building houses or hotels on them, which escallate the rent rates rapidly. A couple of squares let you draw cards from one of two decks; some cards will cost you in fees or send you to jail. Others have beneficial effects either giving you cash or perhaps the ability to not pay rent for a turn. Admittedly that last card isn’t in Monopoly, which is about as innovative as Rento Fortune gets. The other “innovation” is a couple of squares that let you spin a wheel of fortune, which can result in anything from a big cash payout to losing property.

The other big difference is that rather than buying properties tied to street names, as you do in standard Monopoly, here you buy entire countries. This has no effect on the gameplay, but seems to have been the excuse the developers had for putting a caricature of Kim Jong Un into the game to walk you through what passes for the game’s tutorial. It doesn’t actually make much sense why he’s in the game still, since North Korea/ DPRK isn’t one of the purchasable counties on the board, but hey, at least I don’t have to look at an ugly version of the already ugly Donald Trump.

I sincerely regret having already declared a worst game of 2018. This is $15. #PS4share https://t.co/BCkJAiupX2 pic.twitter.com/FUWHzZZJ6J

The game itself actually works, but it’s the most shoddily executed attempt at a board game I’ve ever played on a console. Rento Fortune was initially a mobile game, and whether it’s the constant references to “clicking” on things, or the fact that none of the interface has been optimised for playing with a controller, nothing about actually playing the game is pleasant. Trading properties – such a critical part of the Monopoly experience, is a mess, and genuinely difficult to tell what exactly is being traded around.

There’s little tactility or refinement to the board, either. Dice don’t roll about the place, but rather icons that represent them twirl around a little before stopping and showing you what you “rolled;” I must say I prefer when developers put some effort in and allow dice to knock pieces over and the like. Pieces, meanwhile, either look like the cheapest bits of plastic that come in the cheapest kid’s board games, or you can use “special” pieces which look like cheap paper clipart that has been cut out and stuck on the board instead.

There are a couple of different boards to play on; some have different themes (Halloween, Christmas), and others randomise up the spaces on the board for various properties, but neither of these alternative approaches to boards does anything but superficially change the core boardgame action. You can play online or local multiplayer, and suffer through this all with someone else, or you can play against AI (which ‘cheats’, badly, on higher difficulties in order to make the game more challenging), and save your friends the pain of subjecting them to this game. 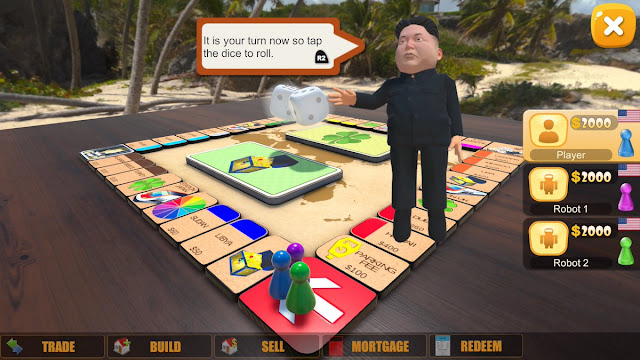 I could go further, into how Monopoly itself is a flawed concept for a board game, long left behind by anyone who is remotely serious about the board game form and design principles, but that all seems rather superficial to the fact that this is a nastily cheap clone in the first place. Even assuming you enjoy Monopoly enough to want to play a clone of it, this isn’t a good clone on any level.

And it costs $15. That’s the most galling thing of all. This thing is free on mobile, and yes it supports microtransactions, but for people who just want to play a cheap and nasty clone of Monopoly once in a while, “free” is about the right price for it. If they’re one of the inevitable few that somehow this clicks for them over other Monopoly clones, then there’s the option to give the devs some money for some extras. The PlayStation 4 can handle free-to-play games, so it was a conscious decision by the developers to stick a “premium” price point on the game.

And Rento Fortune just isn’t worth it. There’s a good half dozen genuinely good board games available on the PlayStation 4 if you want to play board games on the big TV, including Monopoly itself, and those games have interfaces that don’t drive you insane trying to work your way through them, don’t have random caricatures of Kim Jong Un popping up for no actual reason, and have some kind of effort put into the production values. Consequently, there isn’t much that I would recommend Rento Fortune over… even to the most hardcore of board game fans.