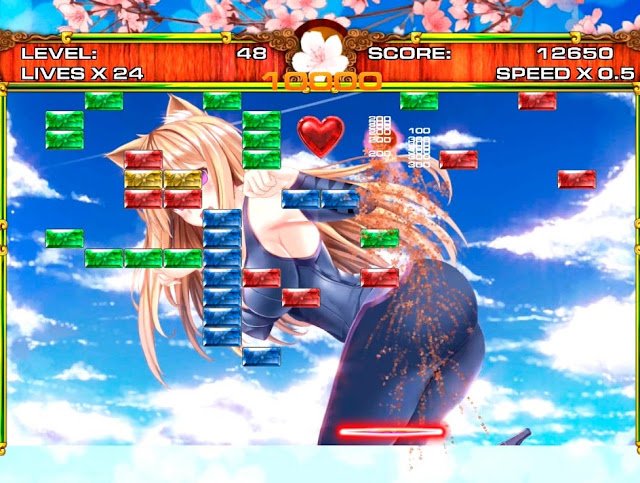 We’re nine days into 2018, but I am already completely comfortable in calling this: Briks 2 is the worst game of the year. There’s nothing about this Breakout clone it that isn’t broken at a fundamental level, and to add insult to injury this game is asking around $30 Australian from players. I’m usually one to defend the price of games, but not when it’s a 0/5 game.

Basically Briks 2 is Breakout, with animated backgrounds (one per level, with 100 levels to play through), the occasional enemy, and powerups. Since this game was so lazily thrown together, I’m going to be lazy about how I summarise each of those three elements, and how shonky they all are:


1) The backgrounds. There are a mix of backgrounds. There are some relatively inoffensive ones – footballers, waterfalls, grim reapers and the like, and there’s a touch of animation to make them more interesting. But those aren’t what you’ll notice. Oh no. Around half the backgrounds comprise of one of two things: cats with laser beams shooting out of their eyes and a psychedelic background behind them, and anime girls with massive, heaving boobs nearly falling out of their tops.

Now, I like cats, but those backgrounds are done in a way that breaks every law of aesthetics and is a genuine threat to give people epileptic fits. I’ve never experiences epilepsy before and have no issue with almost any VR game, but somehow those bloody cat levels made me feel genuinely sick.

I also like anime girls and anime boobs and half the stuff I write here at DDNet defends one or the other. But they need some kind of context, even if it’s to be deliberately trashy and play to B-grade exploitation (hello School Girl / Zombie Hunter). Briks 2’s girls have no names, no personalities, and no actual reason to be in the game other than, one presumes, they look good in promotional art for it. And I don’t like that at all. It’s not like it’s particularly attractive art, either. Anyone with a basic level of skill in drawing anime could have designed these, and I suspect that’s exactly where the developer got its artist from; the nearby art school. 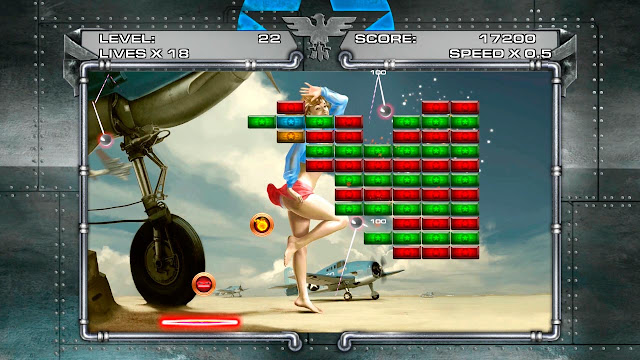 2) The enemies. These are just sprites of a cat’s head or a wolf or whatever. Sometimes, just to make the level even uglier, these enemies are coloured in rainbow patterns or similar so they can clash with the background even more. Enemies are effectively large “bricks” that require a couple of hits to remove and sometimes shoot a glowing orb down the screen that will cause you to lose a life it hits your paddle. Frankly I see these as less like enemies and more like heroes. After all, they are trying to finish the level for you more quickly.

3) The powerups. These range from the completely useless (the paddle doesn’t control anywhere near precisely enough to handle the “three balls on the screen at once” powerup), to the ridiculously overpowered. For example, if the gun powerup appears, allowing you to shoot bullets from your paddle that will destroy any brick they hit, then you’re all but guaranteed to complete the level. Regardless of what powerups drop, however, they don’t make the level itself any more interesting.

That’s it. That’s the entire game. Pick one of a hundred different levels, each with a background that sits someone on a 1-10 scale from dull, to mildly offensive, through to outright vomit-worthy, and then try to clear all the bricks using Breakout-like gameplay that somehow plays jankier than it did in 1976’s original Breakout. You can get up to three stars by completing levels quickly, but I can’t for the life of me imagine anyone would actually replay a level to better their score. 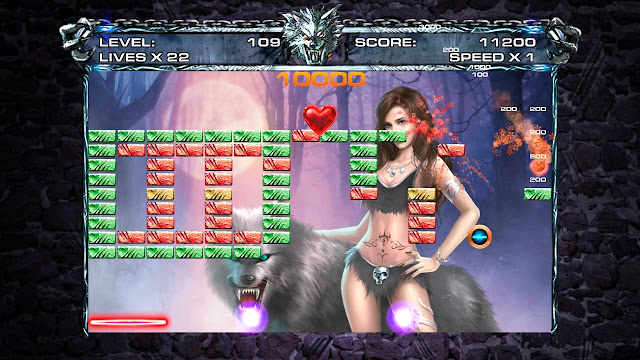 No, wait, there is one other thing I needed to mention; the game seems to use Hatsune Miku as the voice backing track for a couple of pieces of music in the game. Perhaps the most offensive thing that Briks 2 does of all is use her voice so terribly I shut the sound off. Me. Turn Hatsune Miku (or at least some kind of vocaloid or vocal effect that sounds much like her) off.

Truly this is one of the nastiest video games ever made.

Video: Hands on with Under Night In-Birth Exe:Late[st]