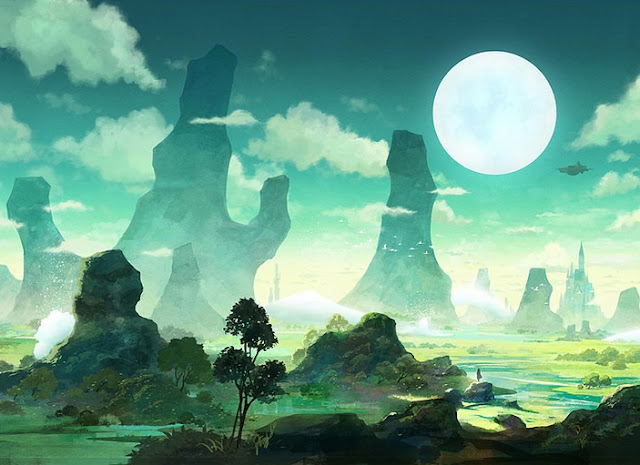 Coming off the back of I Am Setsuna, one of my favourite games in the year that it was released (and indeed it won more than a few awards in the DDNet awards that year), Lost Sphear is so remarkably similar it’s staggering, and that’s a great thing as far as I’m concerned. There are differences, of course; I Am Setsuna took place in a world of perpetual winter, whereas this one has a wider ranged of environmental settings. But in terms of what is important, the core thematic fundamentals are so similar; both games have an overwhelming sense of melancholy about them, and the way they express that is equally beautiful.

Related reading: Matt’s review of I Am Setsuna.

Lost Sphear is marginally more subtle about it, though. For one thing it doesn’t refer to sadness in the title, but more particularly the story follows along with a group of youngsters who have their moments of playfulness and frivolity. One of the problems with I Am Setsuna – at least for some – is how unrelenting the sorrowfulness is. Lost Sphear is a more mature work and understands that levity can enhance a story – even (or especially) a sad one.

There’s also a greater sense of hope from Lost Sphear. I Am Setsuna was a story about guiding a young woman to her own sacrifice – thus rendering the entire journey a reluctant drudge from one scene to the next, given the fact that you’ll fall in love with her good nature and soul. But in Lost Sphear you’re healing. Parts of the world are disappearing and being covered in an impenetrable white miasma. You play as one of the only people able to remove the miasma, bring back the “lost” and reunite people with their loved ones and most treasured possessions.


And yet from the opening moments the game has the same thick atmosphere of inevitability and sadness. Part of it is because of the delicate soundtrack, which sounds like it was written through a flood of tears. But equally, the writing and the sense of mystery that the game takes overly long to break down all direct the player to conclude that the world is not a happy place, and there won’t be a happy ending for the characters.

Of course, things might all work out in the end. Don’t take any of what I’ve written above as a spoiler, because I’m not giving away any of the plot. That would be mean-spirited. All I’m saying is the natural assumptions that the game keeps directing you to make will be towards that sad sensation of inevitability about where the world is going.

Part of this is because, as was the case with I Am Setsuna, Lost Sphear does love depicting the devastation that humanity can wreck on the world. Whether it’s the actions of a mean spirited general, or the simple act of building a city that casts such an ugly pall on the otherwise beautiful landscape (thick smog and all), the game works hard to leave the impression that irrespective of the good fight that you’re fighting against the monsters of the world, the real enemies are less about the monsters in the dungeon as they are the other people that you come across through your journey. 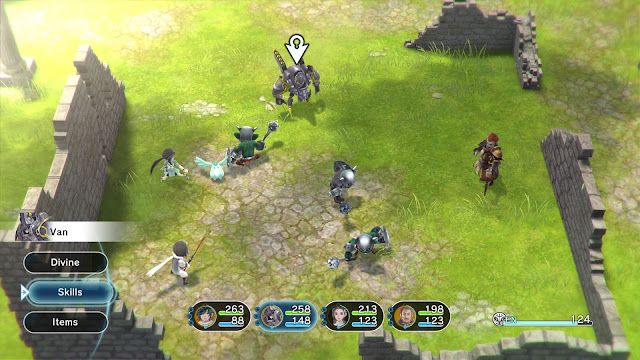 Not all people are bad, of course. The game has a soft spot for the desolate and despondent, and often your hero’s ability to restore “lost” land, people and objects is to help those downtrodden. It’s why, for all its sense of melancholia, Lost Sphear is quite the sentimental, beautiful game.

It’s very beautiful in the distinctly Japanese philosophy in looking at the world. The “lost” are lost because their memories have gone, crystalised and often formed within the world’s monsters. Defeating the monsters, reclaiming the crystals and then holding them close to the “lost” object or person will return them to the world. It’s clear early on that insofar as the narrative is concerned “memories” and “souls” are interchangeable terms, and what you’re really doing is restoring the spirit to the “lost” people and objects. People have these memory/souls, but so too do buildings and other objects have them, and this is where the very Japanese-ness of the game comes in. In the west we tend to see objects and being just that, objects, but to the Japanese everything has a spiritual energy; it’s where their gods and native religion – Shinto – comes from. As a westerner, it can be a little bit difficult to wrap the mind around this largely foreign concept and understand the emotional resonance of the game, but make no mistake, Lost Sphear is a very emotional game, and one that – like the Shinto faith itself – asks its players to really respect everything around them, because nothing per permanent, and in the real world no one has the ability to bring something back once it’s gone.

Lost Sphear tells its story in few words; it’s quite beautiful in its minimalism. I felt that the development team had taken a big step up from I Am Setsuna in terms of the quality of that writing, with fewer moments that are clunky or overwrought. For the most part this game is happy to keep things simple and clean, and allow the broader scenario and adventure do the talking. The moments of levity I mentioned earlier are paced beautifully, and help build characters and provide relief from the weightier moments, even if they are rarely laugh out loud funny. 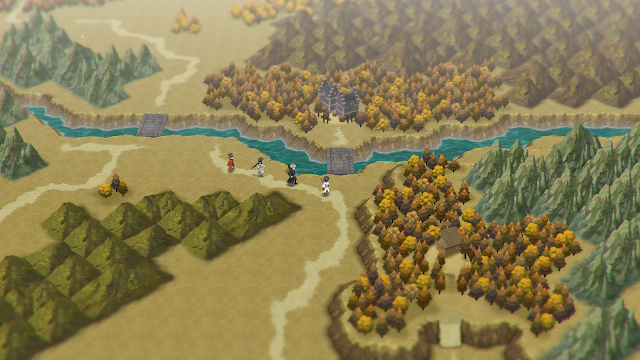 Combat shows some improvements over I Am Setsuna, too. It’s still an active turn-based game where characters will take their turn as an “energy bar” can fill up, but if they take too long enemies will get their attacks in first. However, this game has a greater emphasis on geographical positioning, and encourages you to move your characters – particularly those with ranged attacks – around in order create an angle that will allow them to hit multiple enemies at once. Boss battles are particularly invigorating in this way, as a number of them actually require you to move your characters around to avoid big attacks, or to stop your characters “bunching together” so the boss can’t land attacks on multiple of them at once. Of course, bosses often have the ability to draw characters together right before these big attacks, so you will be spending a great deal of time repositioning your heroes.

Regular battles with common enemies don’t have this same dynamic movement, and in fairness can become a little bit dry after a while. Sadly, a general lack of challenge also lets boss battles down. One or two of the big conflicts towards the end of the game can challenge, but so long as you’ve levelled at the right pace (by not avoiding battles along the way), you’ll get through the bulk of this game without being too tested.

There are some other minor issues that mean that Lost Sphear isn’t going to be one with gameplay that I have particularly fond memories off. The moment where you acquire hulking robot machines is generally an exciting moment in any JRPG, but here the difference between fighting “on foot” and within one of these things isn’t great enough. You get access to some very powerful abilities, and do more damage while being in these “suits.” You also need to be careful about how you use them as you’ve got limited resources to call on them in battle, and it’s generally a good idea to save them for the bosses. Sadly, though, the visual impact of them isn’t significant enough… perhaps because the top-down art style doesn’t allow for the kind of flash that would really make big robot battles exciting. 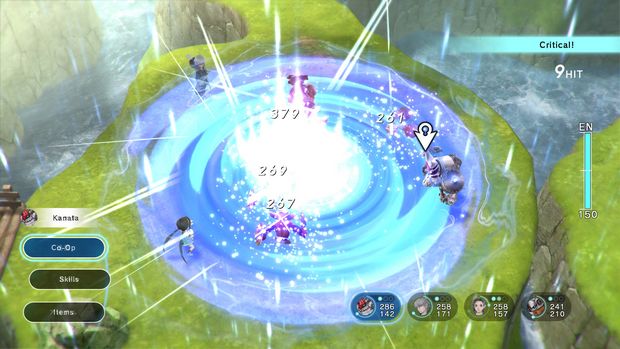 Similarly, the game wisely forgoes random encounters – you can see enemies in dungeons as you explore them, and can sneak up on them to get a jump start in battle. That’s the good. The downside is the overworld map has no enemy encounters on it at all. All you do there is gather up resources that are lying around and move from place to place. The overworld looks beautiful, but feels like a waste of time to traverse. This was the same in I Am Setsuna, and while the developers have tried to address it to an extent this time around by allowing players to build “artefact” towers in certain places around the world to get bonuses in battle, this mechanic feels superfluous to the overall experience.

All of that said, the combat in Lost Sphear still manages to be enjoyable and pleasant. It’s heavily weighted towards traditional retro-style combat systems, but characters all have their own roles on the battlefield, and there’s enough variety in weapons and abilities to keep the tactics varied. Enemies, though too few in design (palette swap rears its ugly head – where a challenging enemy will be the same character model as an earlier, easier enemy, only a different colour), are also fundamentally well designed, and charming in motion.

Lost Sphear, as with I Am Setsuna before it, is a beautiful, heartfelt bit of classical Japanese videogame storytelling. It’s not a game that you should be playing for the gameplay in so much as it wraps nostalgia and some more modern ideas together in order to tell something that is both memorable and soulful. It’s a beautiful, emotive game and with it Tokyo RPG Factory has cemented itself as one of my favourite JRPG outfits going around.

Shadow of the Colossus looks even more beautiful in black & white