We have no shortage of stories about apocalyptic wastelands and grimy, gritty, Max Max-like action. Whether it be Fallout or Wasteland, ELEX or Mad Max itself, there’s no end of these games. It’s not surprising that Fallen: A2P Protocol wants to be one of them.

Related reading: Mario + Rabbids is a great example of how to appropriate XCOM right.

Why are these games so popular? There’s a good article on The Conversation in which three philosophers discuss this topic, and ultimately, they have similar points of view on what the appeal of the apocalypse through art is to players. According to one of the philosophers, Patrick Stokes, senior lecturer in philosophy, Deakin University:

“Personal identity is largely relational: who we are and what we can and can’t do is very largely defined by our relationships to others. You’re a child, a sibling, partner, ex-partner, parent, co-worker, friend, enemy, frenemy, frenemy-with-benefits, relative, student, teacher, carer … any and all of these relations to others shape boundaries and expectations around how you live your life. 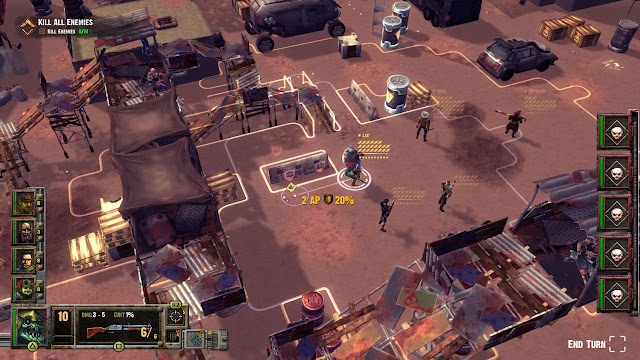 “Without even noticing it, your life largely runs along in a groove formed by how you intersect with the lives of others, and they into yours.

“Then one day you walk out the front door and into a freshly-nuked hellscape. All the sedimentation of your life has just been blasted away. Your defining relationships? Gone, or at the very least, dramatically altered. No job. No government. Possibly no family or friends. That snug groove you ploughed along in is now a wide-open plane.

“Even the network of ethical and social norms that guide our lives in ways we’re barely even aware of suddenly go out the window. The moral sphere has broken down. So go ahead: loot the abandoned store, shoot your newly zombified neighbours with barely suppressed delight, and procreate like a rabbit on ecstasy with total strangers in the cause of “preserving the species”.” 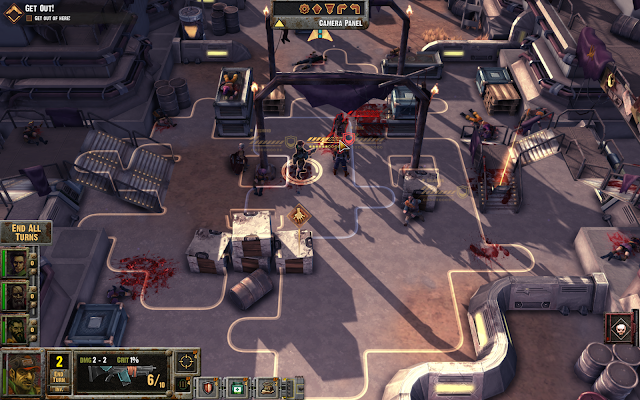 Sadly, Fallen: A2P Protocol fails to capitalise on any of the storytelling strengths of its apocalyptic setting. Without even getting to the atrocious XCOM-style tactical gameplay, the game’s painfully poor plot is fundamentally at odds with its genre because it fails to give you any of the freedom or moral challenges that the genre promises. I’ll give you an example from early in the game: In the opening chapter you find that your hero (I can’t even remember his name) has been betrayed by his brother and sold off into slavery with a barbaric group of pseudo religious types. Luckily for him, another gang just happens to show up and rescues him, promising to help him track down his brother in the process. Actually, they become your best friend instantly… in a world where resources and trust are supposedly scarce.

Then, at the very next level, you need to rescue a reptilian-type character from more members of this cult, as well as their pet mutated (and now quite feral) dogs. After the successful completion of the mission, the leader of your gang posse simply stands around while one of the mutated dogs (which comes out of nowhere, since you just cleared the area of monsters moments ago) runs up to him, and tears him to shreds. Not only is there none of the agency that an apocalyptic game demands (like, for instance, having the ability to shoot one of the dog things), but the plot itself isn’t even slightly concerned with concepts of morality as the world order crumbles; it’s more about presenting players with a series of arbitrary events that push the story on, without even trying to make a statement with any of it. It’s also cheating players – in a game with permadeath why allow you to save a character by playing well, only to have a cut scene arbitrarily remove him anyway?

This, and the fact that the voice acting, writing, and pacing of the plot is beyond amateurish. It’s always a bad sign when a script has swear words and other vulgarities in there just to try and set a “grim, adult” tone, without using any of those words to enhance character or drive home any kind point. It’s hard to set the scene of a post-apocalyptic wasteland when the audience is laughing at (not with, but at) how ridiculous everything is within it. Mad Max: Fury Road was a film of very few words, but it used a host of other storytelling techniques and the action itself to convey a rich narrative. Fallen uses far too many words to tell far too little. 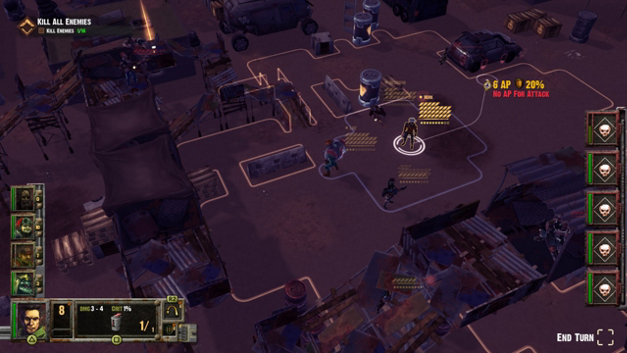 The gameplay is absolutely dismal. You would think when there are already a number of brilliant examples of XCOM-like tactical games to draw from (XCOM itself, and the recent Mario and Rabbids crossover), it would be relatively easy for a development team to simply copy it wholesale to create a instantly workable gameplay system, but no. The developers of Fallen decided to instead throw in an indecipherable interface. There’s no real tutorial of worth, and by way of example, it took me two missions to even figure out how to pick up dropped loot, or use healing items, and I only worked that out after an advice card popped up at random during a loading screen (for the record: you need to bring up the attack circle as though you were going to attack an enemy, and then using the D-pad, cycle through the various commands, which are displayed in tiny text down the bottom of the screen). Even once I had figured out how the game played, the interface remained cumbersome and clunky, and Fallen never became a pleasant experience to play. Even in those rare moments where I enjoyed other bits and pieces about it, I was still wrestling with the interface.

Related reading: And here’s Matt’s review of the original XCOM, which has proven to be so influential in recent years.

The other really big issue the game has is the character level up system. Character skill trees are very limited, and in many cases they have downsides which you might not want to invest in. The only shooting-orientated skill available to low level characters, for example, was one that dropped your character’s accuracy to improve their efficiency. Which is bad enough give the game isn’t exactly generous with its “to hit” percentages in the first place, but on top of that if you want any of your characters to specialise in ranged combat, you’re essentially forced to take that skill, because other critical skills are locked away behind it, and you can’t reach them without first taking this undesirable skill. I have never seen skill trees designed this poorly before.

The one thing the game gets right, that fits with the apocalyptic theme, is the lack of resources available for your characters. I was forever scrounging around for bullets, and then thinking carefully about whether to fire at enemies at all. In the end, for common enemies, it did make a whole lot more sense to tackle them in melee, because swords and the like didn’t consume precious resources to use. Sadly, because the game is so intensely ugly, I also didn’t care in the slightest what actually happened to my characters, so the intensity around the struggle for survival that the game wants to portray just isn’t there. 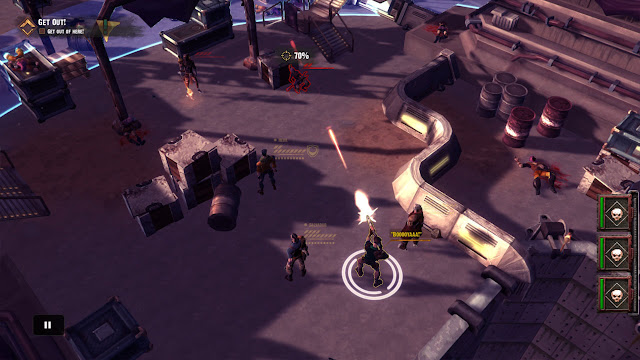 Fallen: A2P Protocol wants to be XCOM meets Mad Max, but the development team lacked the ability to truly understand either the apocalyptic setting that it borrows from Mad Max, or what XCOM does to work as a tactics game. Derivative and bereft of any meritorious ideas of its own, Fallen: A2P Protocol is the first really big disappointment of 2018, because in the hands of a mature, talented developer, that idea could have been brilliant.