It had to happen. After 2017 was a year of almost endless quality in terms of the games releases, and indeed it is hard to argue that it isn’t the best year of all time for the industry, one of the last games I played for the year had to sour everything. Wonder Boy Returns really is that bad.

While I’m not the world’s biggest fan of platformers, I’ve always had a soft spot for Wonder Boy. I never owned a Sega Master System, but a relative did, and had this game, and I remember being absolutely absorbed with it every time we visited. Well before speed running was a formal thing, Wonder Boy was constructed entirely around pressing down hard on right directional button and fluidly jumping over traps and hitting enemies with Wonder Boy’s tomahawks, all without breaking momentum. Where Super Mario Bro and its ilk had that exploration element with their relatively intricate level design, Wonder Boy was all but a runner game.

I was excited to see Wonder Boy Returns on the PlayStation Network, because it promised to be a remaster of that original game, while modernising the art and so on. It does none of that. Most critically of all, the game lacks anywhere near the same sense of challenge as the original, and for a game structured like this, that’s a killer. Where Super Mario Bros. relied on its level design to sustain interest, Wonder Boy was all about rhythmically tapping the jump and shoot buttons in order to deal with obstacles without slowing down. As such, levels tended to be flatter, but had enemies and obstacles placed strategically to provide a maximum, genuine challenge for the reflexes. Because this modern game has a gentler difficulty curve, and unlike the original doesn’t ask players to complete the whole thing in one go and with just a few lives, progression doesn’t feel rewarding at all.


Instead, levels all roll into one another, with bland placement of enemies and objects making for a lot of mindless moments within the game. It doesn’t help that it looks like the cheapest of Adobe Flash games, either. Well before I got to the end of the 10-world (each with four stages) main quest, I was numb to the point that the majority of deaths happened simply because I wasn’t paying even the slightest bit of attention to what was actually going on. And, again, it didn’t even matter that my character was falling down pits some of the time, since in the absolute worst case, if all of my lives ran out, I’d be simply able to replay that particular stage again. In the original Wonder Boy, all the lives running out meant going right back to the start of the game, and whoo boy was that last life on the last level an intense experience.

It doesn’t help that there’s such a minimal variety in the stakes themselves. They’re constructed of the standard lot of levels you expect to see in a platformer – a grassy level here, a level in a cave there, an icy level after that – but there’s nothing to link them to one another, making each environment completely arbitrary. That itself wouldn’t be such a problem if the game didn’t reuse the same assets and environmental tricks with each time a specific environment popped up. There might be forty stages all counted, but really they’re just remixes of a fraction of that total.

As mentioned, the presentation doesn’t help. Wonder Boy has had his soul sucked right out of him in his “modern” update, and through you can unlock the classic Wonder Boy as an alternative character, that fellow looks oddly proportioned, like he’s had pixels somehow stretched to make him work within the context of this game. It’s hideous A third character unlock is Wonder Boy’s girlfriend, whose name I can’t remember but she looks like a bad Hatsune Miku fan art. She’s the best of the bunch, but only because she reminded me that I could go and play Hatsune Miku games after suffering through this. 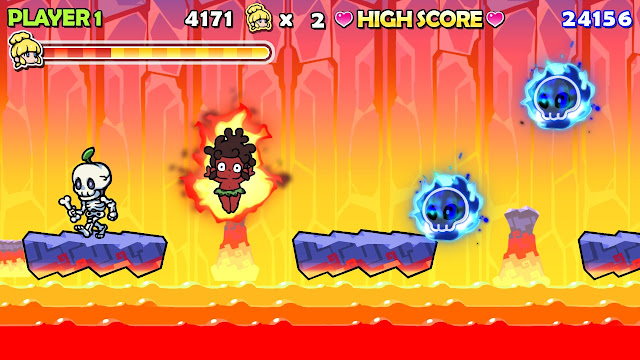 Finally, Wonder Boy himself doesn’t control particularly well. There’s a loose feel to his jumps and attacks, which is rarely critical because the levels are so generously designed, except when you’re going for the (completely optional) 100 per cent completion. Scattered across each level is three girlfriend-dolls that Wonder Boy can pick up, and it’s these that determine if you’ve truly 100 per cent completed a level or not. These tend to be in difficult spots, and are the only time you’ll wish you had sharp, precise controls to be able to gauge the timing and distance of those jumps just right. Wonder Boy Returns’ bosses are also more difficult than they should be because of that level of imprecision, and on top of that there’s the occasional quirk of poor programming that is irritating to deal with. For example, when Wonder Boy is running down a gentle slope, often times a ‘jump’ input won’t be recognised, and the next thing you know the fellow’s run into a fire and it’s an unnecessary life lost.

The one thing the developers got right is the music, which are quite decent remixes of the classic, brilliant Wonder Boy score. It’s the least important element of a game to get right when nothing else works, but I’m scratching for compliments here.

There’s nothing of value in Wonder Boy Returns. It’s the weakest platformer I’ve played for years, and were it a free Flash game, as it so closely resembles, I still wouldn’t recommend it.

The 24 games of Christmas! Game #20: Story of Seasons: Trio of Towns