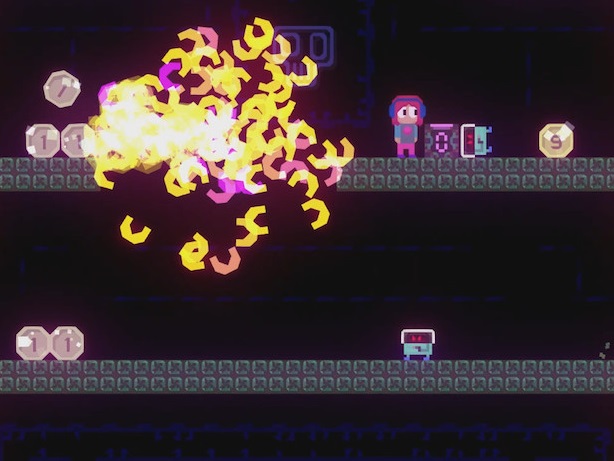 I hope you’re not expecting a succinct description of what Uurnog Uurnlimited is in this review, because after hours of play I still don’t think I know exactly what it is. It’s a puzzle platformer with a level structure similar to Super Mario Bros. 2, in that it’s full of doors that lead to unpredictable places, creating a whimsical, dreamlike game feel in which the player must relinquish any semblance of real world logic.

Related reading: Matt’s review of Knytt Underground on the Nintendo Wii U.

It’s also fairly bad at teaching the player what its mechanics are, instead relying on the fact that players will naturally experiment and figure out the answer to a puzzle based on sheer trial and error. In that regard, it’s similar to games like Starseed Pilgrim, in which discovery of the game’s mechanics and boundaries is in very essence the game itself. Also, it’s developed by Nifflas Games, most likely known for Knytt and Within a Deep Forest – and if the name rings a bell, you’ll know plenty well what you’re getting into.

Uurnog Uurnlimited is one of those big, expansive puzzle games where instead of a level, there’s a big overworld and instead of simple win/lose states, there’s a bunch of different solutions to one problem. The main goal is to collect animals hidden within convoluted environments that require some real skill to navigate, and shoving them onto a teleporter which transmits them to your “safe room” – a persistent screen in the game where all objects stay for the entire playthrough. Managing your safe room is key to success, and it’s entirely possible to make victory impossible (or at least very tedious) by not paying attention to what you’re chucking into the game’s various teleporters. 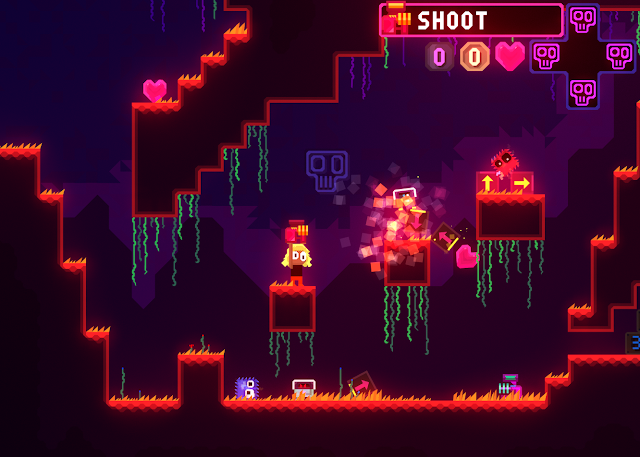 The safe room branches out through a variety of doors, most of which are locked at the start of the game. As the player finds more keys, they will be able to access more parts of the game world, experience more puzzles and hopefully rescue more animals. It’s a restrained way of making a non-linear world but leaving the player with some direction so as to not overwhelm them, and by making the game’s world itself a puzzle, Nifflas Games draws engages the player with exploration and wonder.

This same ethos is expressed through the game’s item system – every single block in the game can be picked up and held overhead, and every block in the game can be “used” for a unique purpose. You can grab enemies and use them to shoot blocks out of the way, for example. The game creates many puzzles simply by dropping the player into a room with a variety of usable objects, and the player will need to figure out which combinations of objects will allow them to advance. Other puzzles require players to use items to traverse difficult platforming segments or hazardous terrain. Other puzzles effectively task the player with mitigating chaos that they themselves created beforehand. Most puzzles have multiple potential solutions and lots of abstract thinking is required to succeed. I found this to be a very mentally taxing game – there are no breadcrumbs or obvious solutions here – but it means that the solutions you will find are more valuable as a result.

The world of Uurnog Uurnlimited is lit up with dark backgrounds, garish neon foregrounds and lots of sharp edges, leading to a visual spectacle which is at times painful to behold. Humans, enemies and environments are expressed in an almost psychedelic style – it’s reminiscent of an early Samurai Jack episode – the overall effect was a hypnotic piece mixed with discomfort. It’s very different compared to the developer’s other works, which have often used dark and muted colours to bring about a sense of peace and tranquillity. Here, instead, every object demands your attention and your eyes will be working overtime trying to process all the information. 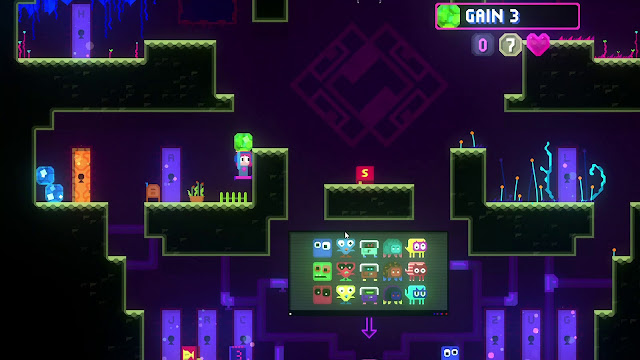 I can understand Uurnog Uurnlimited as an interesting set of systems designed to create puzzles with organic solutions which force the player to think creatively about the tools they are given. I can understand that the game is about putting the player into a disorientated, trancelike mindstate. And, personally, I hate it all. The fact that levels are nonlinear, unpredictable and feature mechanics which aren’t properly explained at all puts the learning curve as a steep vertical wall. I’m sure it’s fun once it’s understood, but it’s also a game which tries its best to not be understood. It wants to give the player questions upon questions, without any answers.

But as I kept playing, I could appreciate a subtle beauty in Nifflas’s goal to subvert and question all the existing conventions of platformer games. Building upon work in games such as Knytt, which pushed a non-violent approach of exploration and engagement with an alien environment, Uurnog feels more like it’s about engaging with alien gameplay systems. For example, you can buy guns in this game, but they are mostly used as tools to solve environmental puzzles. Simply getting a gun to the place where you need to shoot something presents the player with a problem – holding any object doubles your character’s size and limits the doors they can go through. You will occasionally receive reward boxes for capturing animals, but these boxes can spawn anything from currency to dangerous explosives. It seems deliberately designed to confound expectation and force the player to think from a new perspective. Uurnlimited on the Switch boasts a potential co-op mode, which doesn’t affect gameplay a whole deal but it lets another player experience the game world with you, and it might be a great option for those who like to talk through their thought processes before they are able to solve problems.

Uurnog Uurnlimited is a Nifflas game through and through, but unless you’re a diehard fan of his puzzle design philosophy, this isn’t a game which will win you over. So many times in play, I felt like the developer was assuming I was going to think the same way that he would – and maybe that would be true for fans of his other games, but for players expecting a more traditional platformer experience every design choice here will be infuriating. It really boils down to whether you can tolerate a game being deliberately confusing and unfamiliar for the sake of feeling novel – some might call it clunky and unwieldy, while others might think it’s the most original puzzle platformer they’ve played in years.

Game of the Year 2017: PlayStation Vita game of the year