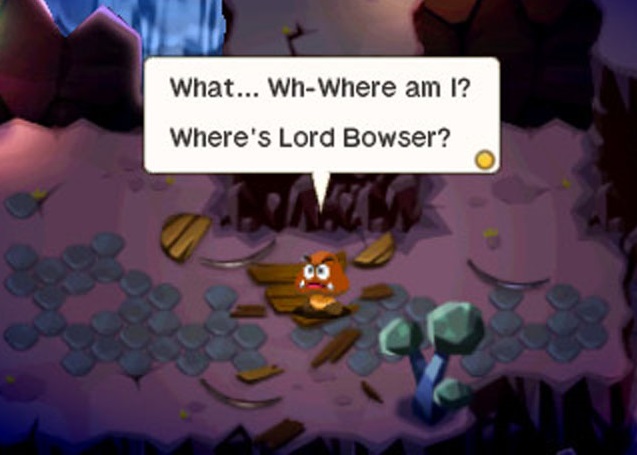 So far, 2017 has been host to a lot of incredible games, it most certainly has been one of the best years in games in a very long time. Even in a decade where remakes have almost certainly outstayed their welcome, 2017 has been host to a lot of amazing remakes as well. Mario & Luigi: Superstar Saga + Bowser’s Minions falls short of being great, but remains a worthy title in the series.

Related reading: Clark’s review of the original GBA game, on the Wii U Virtual Console.

The original Superstar Saga came out on the Game Boy Advance all the way back in 2003, a time that I refuse to believe is already 14 years ago. Since then, the Mario & Luigi series of RPGs have had four sequels, including one that crossed over with the other Mario RPG series, Paper Mario. The series has had mixed results, with many attempts to alter the mechanics of the games and add gimmicks, it often felt like the developers had to make changes to keep the series fresh, while disregarding the very reasons why people flocked to the original game. In saying this, Superstar Saga + Bowser’s Minions feels like a refocus on the core game, and while it’s good, a lot of the charm from the original Superstar Saga isn’t expressed enough in this remake.

This is not to say that Superstar Saga + Bowser’s Minions is a bad game. Quite the opposite. It follows the original story where two emissaries from the Beanbean Kingdom pay Princess Peach a visit to secure a stronger bond between the two neighbouring kingdoms. Soon enough they reveal their plan by stealing Princess Peach’s voice and replacing it with an explosive vocabulary (literally). Every time Peach tries to speak, symbols appear from her mouth and drop to the ground in an explosion. Bowser arrives just in time to kidnap the Princess, and decides to fight his better judgement as the Princess is now a liability he can’t have in his castle. Bowser then suggests to Mario that they team up for now, just so that they can save the Princess and therefore make her ready to be kidnapped again. Bowser then finds himself trapped in the Beanbean Kingdom, ironically needing Mario to save him as well. While I think most of us are pretty tired of Princess Peach constantly getting kidnapped, I did enjoy this take on that story, and Superstar Saga certainly makes it known it is self-aware about this – a common thread for many of the Mario RPGs, actually, and one that makes you wonder why Nintendo sticks so closely to a “tradition” that it knows is archaic and no longer above criticism, when Nintendo itself recognises through these games that it’s an issue. 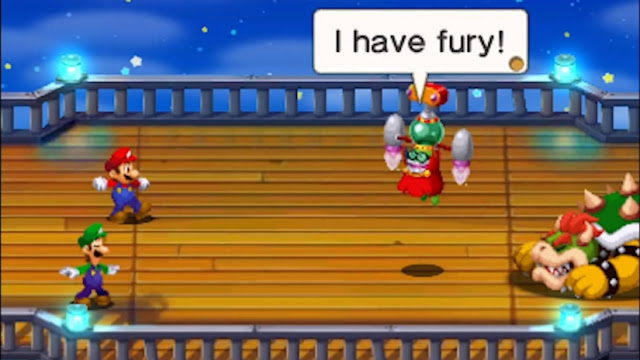 The game is played by simultaneously controlling both Mario and Luigi at the same time. Luigi following Mario everywhere he goes in terms of movement across the levels, but has a dedicated button for his own actions, when he needs to jump and so forth. This opens up for some creative puzzles throughout the games, where the brothers have to time their actions with one another in order be able to move forwards. One major difference from the Gameboy Advance version is that the two brothers only swap their positions based on the action that is chosen on the touch screen, rather than the manual input present in the original. For instance, Luigi will lead the way when the high jump action is chosen, but Mario leads when the spin jump is chosen.

To actually play, this game still feels somewhat awkward after 14 years, but I do not believe there is a lot that can be done about this due to the nature of the gameplay. Some people will feel completely natural with the control scheme while others may find themselves yelling at their 3DS when they make a minor error, causing them to fall down a long way and then having to trek their way back to the top of a mountain.

The battle system has had a more substantial tweak. Players now have access to an Emergency Guard move, and it is a very welcome addition, as people who have played the original, and then this, will very quickly discover. Tutorials on how to do Bros. Attacks are present during battle now as well, which became useful as I couldn’t always remember every combination the game had to offer. Best of all is that there are few gimmicks, as a consequence of the game’s heritage as a remake of the original. It’s a straight, clean, entertaining combat system that won’t tire you like others in the series will. 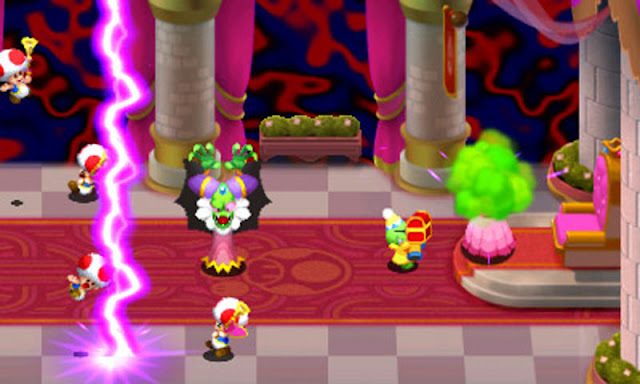 Other changes that have made a huge impact on the gameplay include speeding up cut scenes, which is an absolute godsend considering that in the original every character moves at a snail’s pace in every single cut scene. There is also the ability to open up a mini map on the touch screen and place pins on that map to help with navigation. It might not sound like much, but in 2017 these kinds of things can be considered almost standard, so it’s nice that the developers chose to modernise the title somewhat to remain accessible to a new generation.

The game does retain a lot of the humour found in the original game. Many of the games jokes do rely on some heavy knowledge of Mario lore. The constant barrage of jokes about poor old Luigi are entertaining, and the game does show that Luigi can handle being the butt of so many jokes. At times it does seem strange that the likes of Toad and Bowser don’t even remember who Luigi is considering the role he’s played over the years, but that’s just part of the narrative that they are going with.

Also included in the game is an additional story called Minion Quest: The Search for Bowser. Thankfully it doesn’t include any yellow characters from a certain DreamWorks movie series. The story involves Bowser’s minions having to go on their own quest to save Bowser from the Beanbean Kingdom. Lead by Captain Goomba, the minions fight in an army against armies of the Beanbean Kingdom. It’s actually pretty cool and it does remind me a lot of Streetpass Battle (Warrior’s Way in North America). The armies automatically fight against each other for the most part, with the player choosing to send in certain characters and performing button actions to gain an advantage. Bowser’s Minions can grow their army by recruiting survivors from the Beanbean armies. Much like Streetpass Battle, the fights work on a rock, paper scissors system. The three types of troops include Melee, Ranged and Flying, Melee being strong against Ranged, which is strong against Flying, which in turn is strong against Melee. It’s not a full-fledged story by any means but it is a nice addition that is welcome in the overall package. 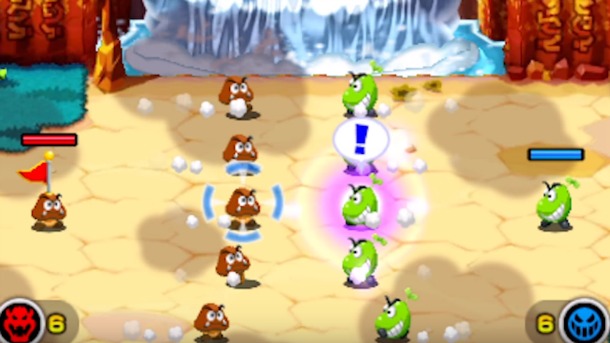 The range of Mario RPG games has had many ups and downs over the years. Arguably the best one of all – the very first one, developed by the mighty Square itself – was just re-released on the SNES Classic Edition mini-console, but Superstar Saga is still a great adventure on the 3DS. It’s not in the range of Metroid: Samus Returns in terms of recreating a classic from the ground up, but it may be enough to satisfy fans of the series that may have been turned off by recent, weaker efforts such as Dream Team and Paper Jam.

Pinball FX 3: Zen Studio’s new hub that will suck endless hours of my life away from me (because it’s so good)