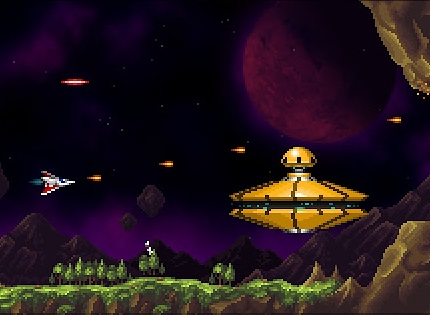 Not all 2D shoot ‘em ups are created equal. If you’ve ever played Action 52 for the Nintendo Entertainment System, you’re no doubt familiar with that game’s penchant for taking quirky character sprites, slapping some enemies atop a generic space background, and labelling them as unique shooter experiences. While it pains me to admit it, some lesser titles since then have aped that cynical mindset to a lesser degree. Yes, they boast higher grade visuals and vapid mechanics to prop them up, but they’ve thrown the art of level design to the wolves.

Following in the footsteps of 80s and 90s genre big names like Gradius, R-Type, and Darius, independent Spanish developer Locomalito knows what it’s like to design a 2D shooter. I realise there’s a bit of caution exercised against western shoot ‘em ups made outside of Japan, but in this case any trepidation is unwarranted. From its freeware origins back in 2010 as Hydorah, it’s instantly discernable that Super Hydorah is a labour of love. Coupled with retro visuals and a killer soundtrack from Gryzor87, Super Hydorah has that delightful sense of style that sucked me in immediately.

While few modern shoot ‘em ups are as shoddy as the Action 52 titles I mentioned earlier, many still miss the boat in other respects. Some try to build themselves around boss fights but neglect to program ones that demand greater aptitude than holding down the fire button and twitching periodically. Others trumpet their lengthy stages, but feature cheap deaths galore due to lacklustre enemy placement or poorly conveyed fire patterns. Super Hydorah gets most of these elements not just right but aces them. 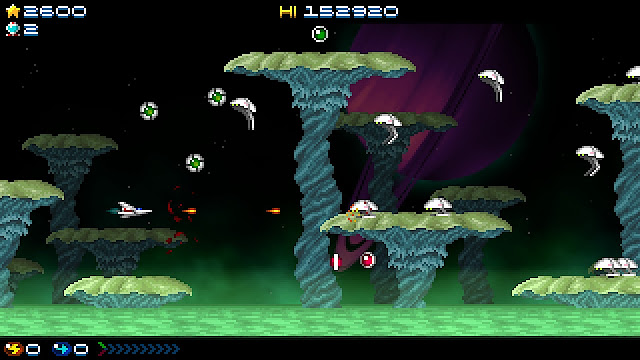 Bosses have weaknesses to specific weapons, must be hit in certain regions telegraphed by their sprite design to be damaged effectively, and boast oppressive-but-fair bullet patterns that generally make fighting them a riveting process of discovery. Levels hit that sweetspot in length that makes replaying them after dying satisfying but not a chore for those who are struggling for the hundredth time. Terrain factors into where players fly their ship since there’s the ever-present threat of bumping into a ceiling, wall, or obstacle to die instantly before you even get the chance to shoot an enemy in the first place. There are ins and outs, vantage points, and careful use of enemies in all the right places so as to be challenging but not unpredictable. To describe it as merely competent does Locomalito a gross disservice; this is fine craftsmanship.
Super Hydorah understands why these games work and exploits that for the entirety of its running length. It then goes onto feature nearly two dozen stages, a number that surpasses the genre standard by a sizable margin, and blows them out of the water with the dynamic duo of quality and quantity. Yes, this game’s “weaker” levels surpass many 2D shooters that only have five or six levels. It does help slightly that horizontal scrollers often get the better end of the stick compared to vertical ones as far as designing terrain for the player to traverse. The variety in bosses and enemies alike is also something to behold, constantly surprising player with setups that can be both traditional and more experimental when the time is right. The cherry on top is the addition of branching pathways in story mode (to use a rail shooter example, think Star Fox 64), meaning subsequent playthroughs have something new to offer beyond the expected.
Besides sheer girth, Super Hydorah presents some concepts that the world of shoot ‘em ups would be wise to embrace on a broader scale. For instance, the game has penalties for bombing civilian homes or otherwise compromising the lives of the innocent. In addition to providing an extra layer of challenge and forcing the player to adapt to tight scenarios, it subverts the presupposition that 2D shooters are about annihilating everything you can see and touch. It’s logical that so many games have you hold down the fire button given the arcade and score-heavy origin of these games, but so rarely do players of this subgenre have to genuinely question their actions beyond practical strategy. 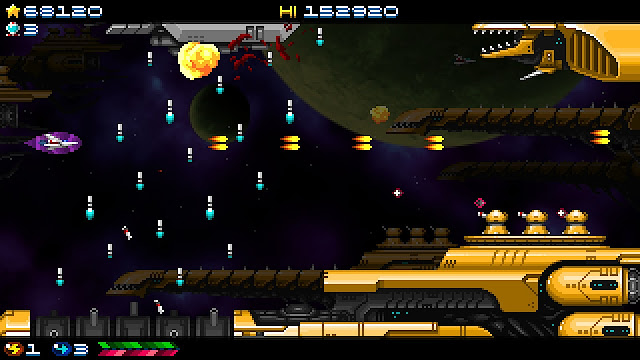 I really can’t stress my fondness for Super Hydorah’s level design enough. Each level presents scenarios that have to be navigated around before, during, and after you deal with enemies. Enemies are meticulously placed in stages with this surgical precision that demands simultaneous problem-solving and sharp reflexes. While some games simply pull the wool over the player’s eyes to convince them that having to memorise level layouts constitutes true challenge, the stage structures and enemy placement allow skilled players to potentially thrive during their first run through…maybe.
That hesitation marks the only aspect of Super Hydorah that I’m iffy about: the challenge. Make no mistake – as a retro game aimed at a niche, it makes perfect sense that the game packs a punch at times. As I just mentioned, the level designs themselves are brilliant.  The controls and the clarity of enemy fire get the job done comfortably. I’m more concerned about some underlying factors that impair these otherwise standout elements.
The game is hampered somewhat by its implementation of player growth, by which I mean both in-level power-ups and the equip weapons that are accessed outside them during your downtime. The former are not potent enough to be reliable since bulk is required to make them effective, but they are compromised upon death. Super Hydorah is not the first game to penalise you for dying like that by any means, but when you’re dealing with one-hit kills and the loss of the game’s proper ending when you use continues, well, it’s a little more controversial. If the power ups stuck around until you got a game over, the experience would be more palatable. As is, it kind of sucks the life out of you to approach a robust boss with the right equipment, slip up once, and then be expected to win in impossibly worse circumstances. Even some of the most brutal games from the 80s and 90s were more forgiving at times. 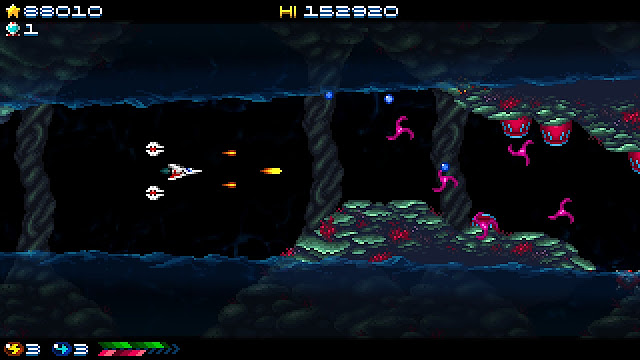 Meanwhile, the optional weapon variety is promising on paper but often weak in practice since some are blatantly inferior or catered to overly specific scenarios. Being situational would be fine if you could swap between weapons during a stage or at least pluck from a smaller pool on the fly. A deeper element of strategy would be injected as a result and many of the toughest 2D shooters have some variation on that system to provide players with a fighting chance. The weapon system and certain aspects of the challenge level actively work against Super Hydorah’s otherwise balanced and fair challenge by giving higher value to memorisation.
That’s a shame because, besides this, Super Hydorah has the makings of a tricky but fair outing. Getting hit once without a shield results in instantaneous death and you aren’t given the courtesy of restarting where you died. It’s back to start of the scene or boss fight. That said, the game is benevolent enough to let you save between each stage. The game rewards skilled players by allowing them to keep their goodies if they can survive forever, but the omnipresent threat of losing them creates tension. Should you die repeatedly, there’s always the chance you’ll wind up frustrated due to the loss of upgrade. However, levels are well paced enough that repeating them several times doesn’t feel discouraging. If Hydorah were slightly less stingy, its demand for precision would be inviting. The flip side is that casual players will find themselves encouraged to bring their A game 100 per cent of the time, even if that means resorting to dozens of continues.
If a polar opposite of the cynical “conveyor belt” approach to game design exists, it’s in the form of Super Hydorah and its slew of dextrously designed levels. Though it can be challenging in the wrong ways at times, it serves up a solid challenge for shoot ‘em up aficionados. On the whole, it’s a game that embraces the teachings of the genre behemoths while offering its own thoughtful tweaks.

The Friday Ten: The ten best visual novels of all time