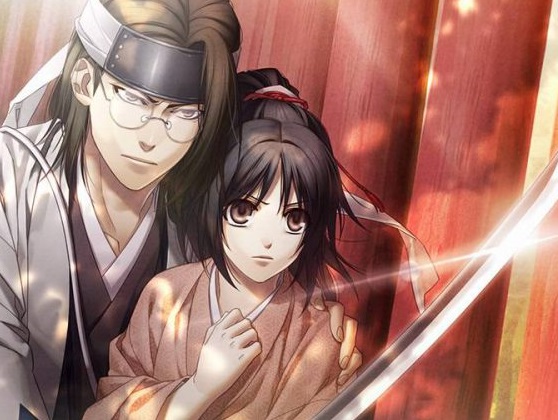 Hakuoki: Kyoto Winds occupies a unique space between a game and a neat education in the history of feudal Japan, and it deserves praise for meticulously carving out this space despite traditional notions of what otome games are meant to be like. Visual novels are often mistakenly maligned for lacking in entertainment, but there are standouts from the genre which blend the narrative depth that VNs have the potential for with unexpected approaches to underappreciated topics. Collar x Malice and its comment on gun control is one example that I can think of off the top of my head, and I’m pleased to report that Hakuoki: Kyoto Winds is another (even though it is technically only half of Hakuoki: Shinsengumi Kitan).

Related reading: Matt’s review of the same release on PlayStation Vita, for a different perspective.

Hakuoki: Kyoto Winds takes place at a time in Japan where outside forces were destabilising the country’s historically isolated economy. Politically, the perception of the competing ruling groups was reaching a boiling point as well – the shogunate was being seen as unable to protect the country from foreign incursion, and the Emperor’s status as a mere political puppet was rewriting itself in the face of that dissatisfaction. The Emperor advanced this tension when he advocated for foreigners to be essentially kicked out of the country, which catered to popular sentiment but also gave him the chance to elevate his own position. When the shogunate responded to the Emperor’s order by meeting him in Kyoto, an elite force was left behind which then grew into the Shinsengumi i.e. the game’s eligible samurai bachelors.

It’s important to note that all of the above isn’t just a run-down of the game’s historical timeline. It’s a run-down of the actual historical timeline of Japan as we know it. The devil is in the details when it comes to Hakuoki; Kyoto Winds, and even if it is a pretty-boy dramatisation that we’re being fed, it’s a bloody accurate one when it chooses to be. You play as Chizuru Yukimura, the daughter of an absent father who was too busy being a traveling doctor to spend time with you. Your goals are initially simple: you want to find your father, and get the both of you home safe. That’s easier said than done as a newcomer to Kyoto, a place that you’ve heard nothing but bad things about. Samurai had a bad reputation at the time for being out of control, reckless, and lawless, and before you know it, you’re caught up with exactly the kind of roguish and violent characters that you’d been taught to fear as a child. The game gives you the motivation to set things in motion by throwing you a near-death experience that has whiffs of the supernatural, and before you know it you’re on a wild ride involving immortal samurai, impossible romance, and angst. 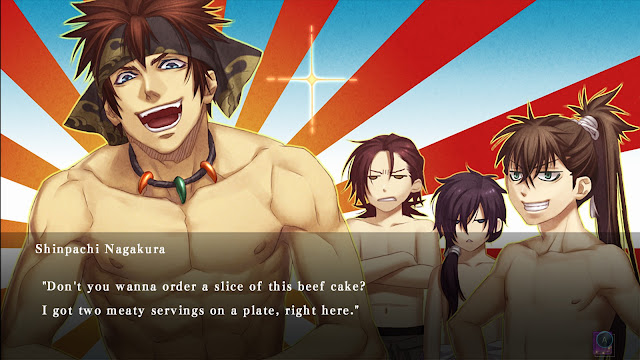 As a PC port, it’s more than serviceable. I played it both with the default keyboard controls and with an Xbox 360 Controller plugged in but if I really had to choose, I’d pick using the controller. It made saving a hell of a lot easier, and it also made scrolling through the all-important text easier as well. This is definitely a personal preference, but worth noting since the original was a console game and it definitely has that feel to it. However, the extra key or two you will have to press on the PC version to get to where you want shouldn’t deter you from picking up this game regardless of whether you’re a newbie to the genre or a traditionalist.

My reason for that statement is because the real meat behind the sweeping Shinsengumi love story that is Hakuoki: Kyoto Winds is, in all actuality, its narrative. That will be an unsurprising observation for those who follow visual novels faithfully, but it may come as a bit of shock for those expecting the main entertainment in an otome to be the stills of almost-embraces with your chosen husbando that make the rounds on the Internet. While it is only half of the Hakuoki saga (the second half hasn’t been localised for the West at this point in time), it’s a damn good half that brims with excitement, intrigue, and tough decisions. Hakuoki may assume that its audience has vague knowledge of the era that it’s set in, and as a Japanese game, that’s expected. However, even if you know absolutely nothing about the Shinsengumi or that part of Japan’s history, you have the benefit of the Hakuoki’s in-game information tidbits that help fill in any gaps. There’s not only a ton of information drip-fed to you about the samurais in the game, but there’s also a ton of information about Kyoto and the political tensions that existed during the environment’s time. As the player character, you not only hear about important events but also get to experience some of them secondhand or even directly based on your choices – the Ikeyada incident and the Battle of Toba-Fushimi stand out as prime examples of where you have the chance to be directly placed at the scene whilst pursuing your chosen love.

What makes the interpretation of these historical events interesting, however, is the dramatic fictionalisation that occurs around them. I’ve already mentioned immortality, but that’s just the tip of the iceberg. There’s a lot going on that needs no explanation, but the ones that do get offered up are brilliant. Hakuoki: Kyoto Winds is a game about romancing battle-hardened warriors whose characterisations are based on real-life figures, and the byproduct of those figures being around in feudal Japan means that a lot of them wouldn’t have been alive long enough to ride off into the sunset with you. Without spoiling anything, Hakuoki: Kyoto Winds is excellent at finding entertaining ways to revise history that give you a variety of romance options per bachelor that they wouldn’t have been able to dream of in their time. As charming and as important to the game that the attractive men are, the real draw is the fact that when you form relationships with them, it feels incredibly meaningful. 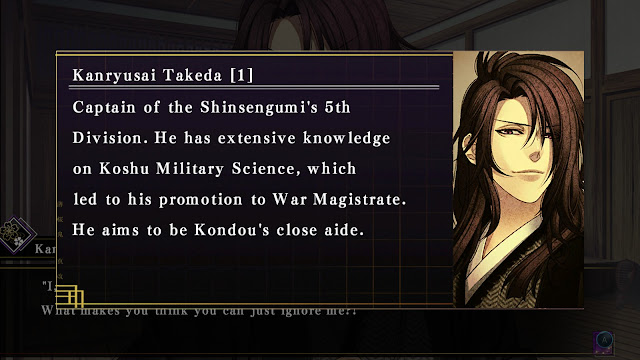 Related reading: For more on the history of the real Shinsengumi, here’s Matt C’s excellent summary of the real-history organisation.

Hakuoki: Kyoto Winds isn’t just a game about romancing someone that you think is good-looking – it’s also a game about forming lasting friendships with the Shinsengumi in a way that marries real life history with video game fantasy expectation. That marriage is incredibly rewarding, and considering how plenty of dating games now dangle interactions with your one chosen partner as the only worthy goal, it’s quite admirable that the small things are made memorable too. Sure, it was nice sharing moments with the love of my life, but it was also nice seeing everyone else (myself included) jostle for food at the mess hall, and to see people enjoying walks in the marketplace and red bean cakes at a teahouse. If you’re looking for your very first visual novel, then you’ll be making a mistake if you pass this up. Hakuoki: Kyoto Winds is a romp through time that both feels great and plays great, and at the end of the day, how many people can say that they’ve romanced someone who played a decisive part in Japanese history?