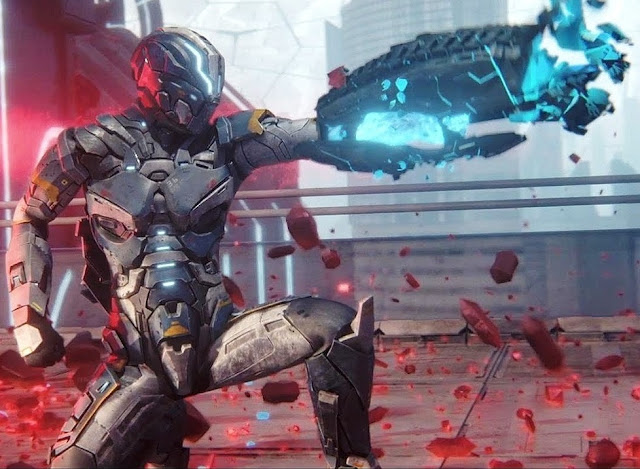 A dystopian future, with robots run amok. It’s your stock standard video game excuse to blow up robots with no real meaning or purpose. Matterfall is another twin-stick shooter that encourages twitch-reaction gameplay to deliver some adrenaline pumping action. Sadly this action isn’t sustainable, with the game easily completed in an afternoon sitting.

Told through a charming opening cinematic, Avalon Darrow is a freelancer hired to clean the remnants of a widespread and dangerous alien technology, Smart Matter. A mass evacuation is in effect, and it’s Avalon’s responsibility to eradicate this deadly technology.

What Matterfall excels at is its perfect blending of a variety of game genres; think Metroid meets Contra. Its fast paced action encourages reckless movement and quick reaction times, due to the mix of intricate 2D platforming and bullet-hell shooter mechanics. Quick movements are also encouraged with the games dash mechanic. After every dash a force-field is created around the player, disabling enemies for a small period of time and disintegrating projectiles currently flying around. In many instances, these period of relief come after a manic period of rushing around the world avoiding enemies and bullets, most commonly while waiting for your dash to recharge. 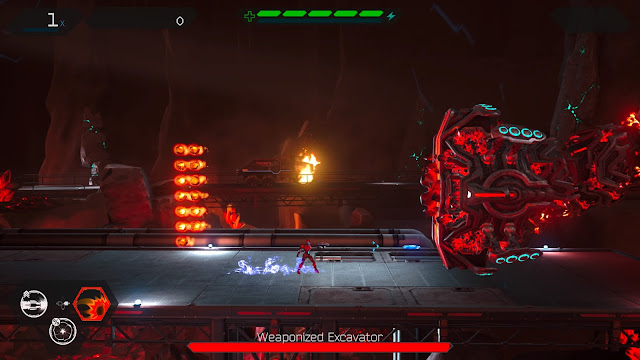 Amongst all the carnage that’s going on screen, there’s still lots that need to be managed. Enemy management is a requirement for success. Every level poses new and more threatening robots to try to bring you down. Understanding and identifying which killer robot poses the greatest threat, in addition to using the environment to assist in their destruction, is an integral part of the combat. Run in guns blazing and you’ll lose a lot of health. As part of the futuristic landscape, there are platforms (comprised entirely of matter) that litter the levels. These platforms can that can be dashed through, and created by using the Avalon’s Matter beam. While the player can move through these walls, the Smart Matter robots are immobilized by it, an efficient crowd control tactic.

When Matterfall all falls into place, and the action combines as intended, it can create some pretty fun moments. You will chain jumps and dashes to pass through matter walls, ambushing unaware enemies on the other side of the wall. This movement system is also used to reach imprisoned civilians in hidden passages of the level. Not only do these civilians add to your score, some bear some greatly appreciated augmentations, upgrades that are equipped. They vary from active abilities like providing grenades or extra firepower in the form of a shotgun, or passive abilities such as more health or extended Overcharge attacks.

Aesthetically, Matterfall lives true to the futuristic dystopian world in its environments and settings. Robots explode satisfyingly into thousands of particles that litter the stage. Amongst the explosive carnage, the game alludes to the countless sci-fi tropes it is no doubt inspired by, with aestheitcly pleasing neon glows flooding the stage, accompanied by some heavy synths and your standard AI voiceover. 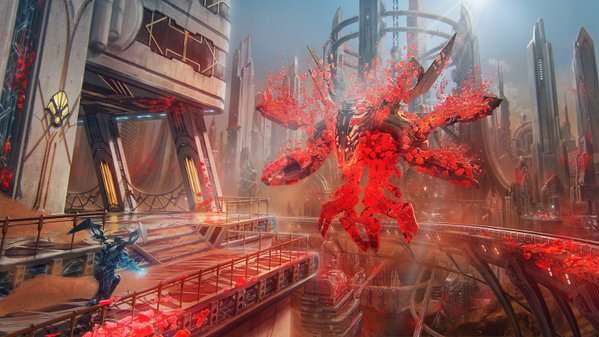 If anything, what holds back Matterfall the most from being completely enjoyable is its archaic control method. Rather than opting for a simple control method using the face buttons and the twin sticks, all four shoulder buttons are used in addition to face and directional buttons. The lack of a smooth control scheme means that at times cheap hits and the inconsistencies in dashing forces the player to curse the difficulty, which is at times player enforced rather than game. The dash recharge meter is nowhere to be seen and it is often difficult to successfully pull off a vertical dash. Further to what is a game with a great emphasis on movies, the control scheme is very limiting. Dashing can only be performed in four directions (up, down, left and right), and jumps feel too floaty. When the game shifts to the zero-gravity zones, movement opens up and feels more fluid – these sections were the most enjoyable and worked well to break up the platforming sections.

There a good three hour romp for all players here, regardless of difficulty level chosen. Levels have leaderboards which feels here like an arbitrary means of extending the game’s life, there’s no real guts behind the end game. And no, that’s not always a bad thing in games – you can go back and use different augmentations on different levels, however fundamentally the game doesn’t change that drastically when these are in play. Each world has three levels followed by a fourth boss battle, which are challenging enough to keep you engaged through to the end.

If you can handle the uncomfortable controls, you’ll be able to immerse yourself in some good old platformer shooting fun.