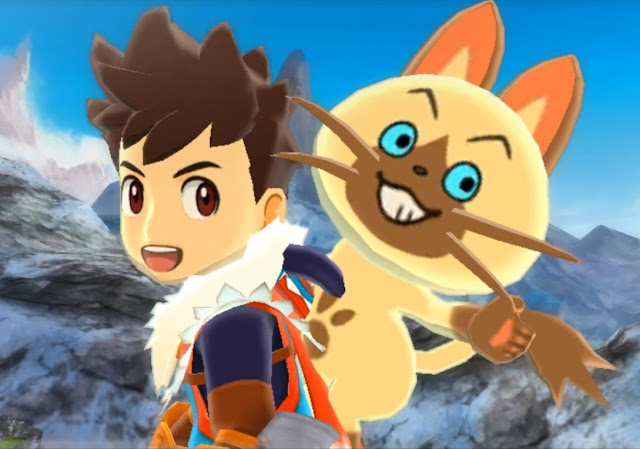 For a game that looks about as adorable as a baby Lagombi, Monster Hunter Stories sure packs a serious punch. It’s an entertaining repackage of the soul of the Monster Hunter franchise, and series veterans will be rewarded for their familiarity with the universe whilst new players will feel encouraged to get stuck into the meat of the matter. Don’t let the cel-shaded art style put you off; it may be a simplification of the series’ usual mechanics but to rate it solely based on its differences with the main titles would be a mistake.

As mentioned, the world of Monster Hunter Stories will feel instantly familiar once you start up the game. Sure, the lines may be a little cheesier and the dialogue may feel incessant at first compared to the minimalistic approach of the other games, but the world and its inhabitants are more than recognisable. The tutorial plops you right into the middle of the central crux of your character’s motivations and the narrative, and it neatly explains the premise for Monster Hunter Stories and its main point of difference from the other Monster Hunter games. It’s not only about killing the biggest and the baddest beasts here, it’s also about taming and raising them.

You play as a Monster Rider; part of a secretive tribe whose creed appears to be equal parts about respecting monsters and fearing the unknown. Your people live a simple agrarian lifestyle, but with all things that seem too good to be true, that gets smashed to bits by the arrival of a great and unknowable evil. You have a painful introduction to what it means to be a Monster Rider, as the game teaches you about the value of friendship and loyalty before snatching it away in a sorrowful display. Newly hardened and even more determined to prove yourself as a protector and an explorer, you bond with your very first monster companion (colloquially known as Monsties) and embark on a journey across picturesque locations that will change your life forever. My one complaint about those locations is the fact that there was, at times, an incredible amount of frame rate lag which took me out of the heat of the moment more often than I’d like to admit. Some avatars would remain unshaded grey figures until you got far too close to them, and this was a noticeable occurrence that I got used to over time, though others may find it more vexing. 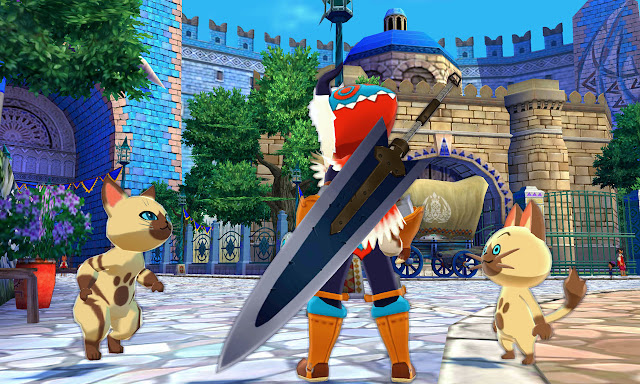 Graphical glitches aside, Monster Hunter Stories is atmospherically engaging and introduces some pretty serious tragedic elements early on, and without giving too much away, it does a good of making you feel for the characters that you encounter. I will note that its central themes and messages are generally delivered in a way that is reminiscent of Pokemon’s approach to narrative development. Part of that may be the fact that your primary emotional bond will be between you and your chosen monster companion, so the comparison is almost inevitable. Having to rescue and raise a baby animal is probably the fastest way to thaw anyone’s heart, so while it’s been done time and time again, it’s an idea that works perfectly within the confines of the Monster Hunter series whilst clearly bringing something new. Just as in Pokemon, there won’t be many morally grey dilemmas. However, conflict is used as a chance to strengthen your bonds with those that you care about, which is important not only as part of the plot but also as part of the combat.

Combat is a turn-based affair, typical of the genre that Monster Hunter Stories inhabits. You and your chosen Monstie fight side by side against the roving beasts that you encounter in the wild. Similar to the other Monster Hunter games, you can sneak up on enemies for an advantage or be caught unawares by a Genprey leaping off a cliff and onto your back. Figuring out what to do to get things moving isn’t particularly difficult – both you and your monster have the choice of 3 types of basic attacks (Technical < Power < Speed). Your job is making sure that when you go up against the horde of carnivorous monsters facing you, you’ve got the right type of attack to counter theirs. Each monster has its own attack patterns, and half the fun is memorising the different cycles and the visual triggers that indicate a change in those patterns. You’ve got your pick of various weapons including huge swords, the good ol’ sword and board, and even the hunting horn, with each type providing its own bonuses to help you adapt to the various combat situations. This is a nice bit of continuity from the main Monster Hunter series and its battle formula, but instead of relying mostly on who can hit the weak spots of a monster the hardest, Monster Hunter Stories has more tricks up its sleeve.

When I talk about tricks, I’m talking firstly about the extra layer of entertainment in the form of Kinship, which is measured by the successful actions taken by both yourself and your Monstie in combat. If you or your Monstie goes head to head with an enemy and wins (i.e. by having the right type of basic attack type to counter it), you gain Kinship points. Get enough of these and you can turn things up a notch by hopping onto your companion’s back and busting out some dangerously slick combo moves. One of my favourite moves is busting out a Kinship combo with my Arzuros, because nothing says Teamwork like the both of us catching some fresh salmon together before performing a deadly aerial stunt to take down a huge Rathian. 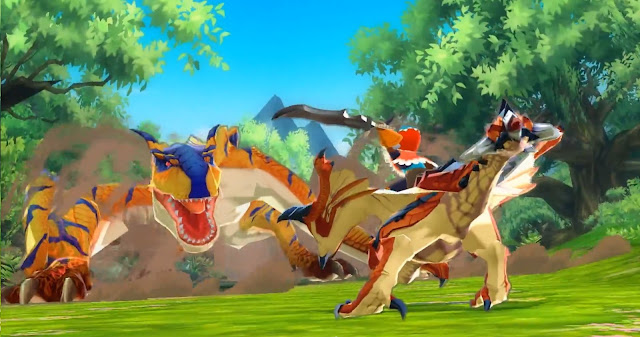 There’s also the addition of monster skill showdowns which happen organically if your Monstie uses the same kind of attack as the enemy – it cuts to a quick-time action sequence where the two clash head to head, with the victory dependent on whether you press the right buttons in the right order. Those moments get increasingly tense as the game progresses, and it’s exhilarating to win those mini skirmishes when you’re hanging on with single-digit hit points left and the colossal prehistoric boss in front of you is about to enrage.

Even when you’re going up against three enemies at once, it never feels like a drag. You have the option of speeding up animations, which you’ll likely do gladly, but each enemy (even if they’re all the same species) has a chance of coming at you with different moves types, which means that you have to strategise for the long haul to make sure that you’re not overwhelmed. I like that while you can command your Monstie to do certain things, this only happens after you’ve built up some Kinship with it. It’s in line with your upbringing as a Rider; that monster shouldn’t be subjugated and used only as tools, and giving Monsties independence in choosing what to do plays well in terms of keeping things fresh and narratively consistent.

While the combat philosophy may at its bare bones be a riff on the weapon trinity, there’s plenty of chances for hardcore players to take it further with making the most of the tactics described above and via min-maxing through gene manipulation in order to get the perfect companion for all situations. The same approach will apply to a lot of the other aspects of the game as well – you won’t be punished for choosing to stick only to enjoying the story, but you’re welcome to walk on the wild side and to put the ‘hunt’ in Monster Hunter Stories if you’re looking for a less casual experience. 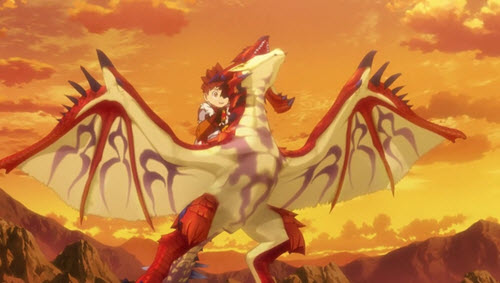 Overall, Monster Hunter Stories is a thoroughly enjoyable, aged-down romp through the good parts of a franchise that has garnered mainstream acclaim. While not all are going to enjoy its exterior, there’s no doubt that it has a solid core and the bits that do pander to old fans give it some delightful flavour. There’s something for everyone in Monster Hunter Stories, and it’s exactly the sort of spin-off game that needs a sequel – it has just enough nods to the original Monster Hunter games to ensure that familiarity is rewarded, and its core monster catching and raising components provide a point of difference that all good spin-offs need to make their mark.

Whether you enjoy raising monsters, slaying them, or adventuring across vast lands with your pals, you’ll find something to hold your attention in this game, and who knows? You may even come to find yourself loving every little bit of this adventure.