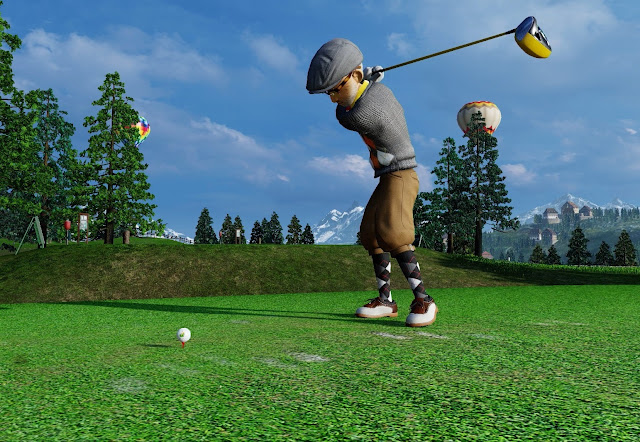 Everybody’s Golf is a series that has quite honestly gone through just as many changes as the PlayStation itself has over the past twenty years. Much like the golfing games by Camelot (think the Mario Golf games and We Love Golf on the Wii), they have toed the line of accessibility and complex gameplay very well.

Everybody’s Golf on the PlayStation 4 starts with all guns blazing, with one of the most comprehensive character creators in a golf game yet. Want to be a balding blue guy wearing a skirt? Go for it. From the outset, it feels as though no matter what kind of character is created, they’ll fit right into the world of Everybody’s Golf, and avoids the trap that realistic sports games fall under when most created players look like complete goobers compared to their hyper realistic athlete brethren. More and more options become available as time goes on, but the game feels super inclusive as you can wear whatever you want regardless of gender or race. It truly is “Everybody’s Golf”, and not just “Middle-Aged White Guys Golf”. Kudos to Clap-Hanz.

Upon creating the golfer, it’s time to enter some tournaments. Rather than golfing alone, Everybody’s Golf tries to make the game feel like an MMO, even in offline matches. People are out on the fairway whacking golf balls alongside you. It looks and feels really strange at first and at times confronting, because no one should be standing in front of you smacking their golf ball while you’re there teeing off (it’s not just dangerous in real-world golf, but it’s also incredibly rude and people that do it deserve a club to the face), but as it’s completely embedded in the game itself, it becomes quite easy to get used to with time. 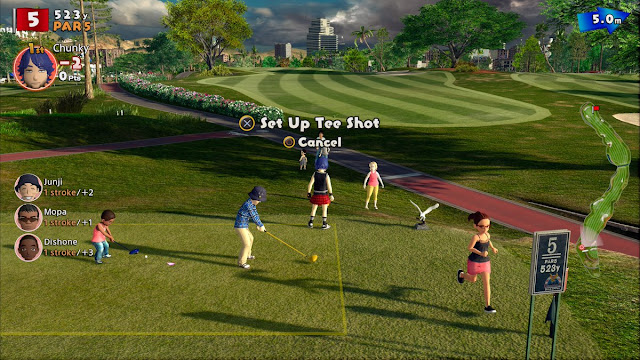 Getting used to those other golfers is something every player will need to get used to in order to advance, because participating in tournaments and unlocking new courses is one of the longest and most painstaking things I’ve ever had to endure in a sports game. The game begins with only one course unlocked, and I had to play on the course 12 times in a row as well as take on three rival golfers in match play just to unlock the second course. Just about everything has to be unlocked as well, such as expert tee boxes (where you can opt to tee off from further away), and even camera angles. It’s bizarre, and I can’t say that I like this method of unlocking items.

Online is a mixed bag. On the one hand, participating in the daily challenge is a lot of fun, where the AI golfers running around on the golf course are replaced by real life players all competing in the daily challenge at the same time as you. There are opportunities to be the best in the world on that given day, as well as being the best who’s currently on the course. Your golfer is able to wander around the holes and choose one to practice on at their leisure, if someone else is online and practicing at the same hole, they’ll appear in the game and golf alongside you. This is the good that the online mode provides.

The other mode is Turf War. This involves players competing in either the red or blue team. The mode has all the golfers involved running around the golf course attempting holes to score points. The better the golfer does, the more points they get, which combine with the team for an overall score. The game gives a time limit, and within that limit you can compete at the same holes as often as you want to improve your score. The team that “wins” at the most courses wins overall. While fun, the game never makes it very clear how to earn the points themselves, as it’s not based on your golf score. Also, like many team style competitions, your team is only as good as your worst player, which can be frustrating at times. If you ever wanted mayhem injected into a golf game, then Turf War is still a lot of fun at the end of the day. 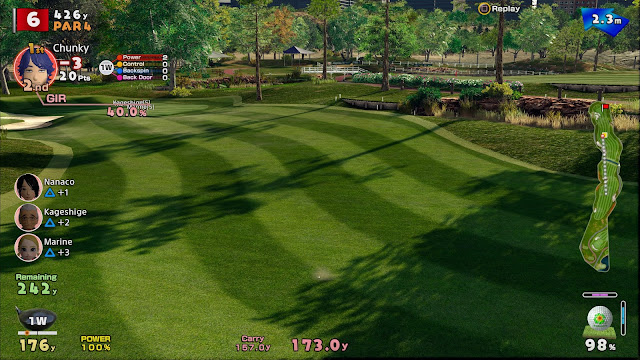 Much like the Mario Golf games, Everybody’s Golf utilises a three-button swing, first button starts the swing, second determines the power, and the third determines the accuracy. Everybody’s Golf actually contains a practice swing bar during loading screens which is such a small touch but it is so appreciated when practicing the timing of my swing. There is an auto mode that negates the third tap of the button and chooses the accuracy at random, it’s a great touch for beginners but it does lead to some extremely bad shots on the odd occasion. So you’ll want to switch over to manual control once you’re in the mood to be properly competitive. As the game progresses, there is an unlock that allows you to make your shots just a smidge more or less powerful if you didn’t get the timing right which is a nifty little move that I haven’t seen done before. But it is yet another unlock.

Another thing that I haven’t seen in a golf game before is the unique level up system. Rather than levelling up the golfer themselves, the game levels the clubs up instead. For instance, the more a golfer uses a 1-Wood and fires off the most powerful shot, the club will level up its power ranking, and for each rank up, the 1-Wood can shoot another 10 or so yards. Chipping balls into the hole, putting from long distances, spinning the ball and getting close to the hole from the fairway are other ways that clubs can be levelled up. While this is fantastic in single-player mode, versing someone with a level 20 Putting Wedge is pretty nasty for beginners, who likely have very little chance of catching up with the best players online. And this mechanic certainly doesn’t help the game avoid being one almighty grind at times.

A lot of the modes and people are rather hard to find, despite the game’s best attempts at explaining the hub system. It has an MMO feel where many golfers are standing around and can be interacted with, though finding tournaments and the options are quite easy, there are other aspects which are not so much. I spoke to a random guy and he just happened to deliver quizzes that offered prizes, and there is a gallery that contains all the golfers you’ve defeated by more than three points. I’ve actually yet to find it in my entire time playing the game, despite unlocking over twenty golfers to view in the gallery, I just wish I knew where it was! 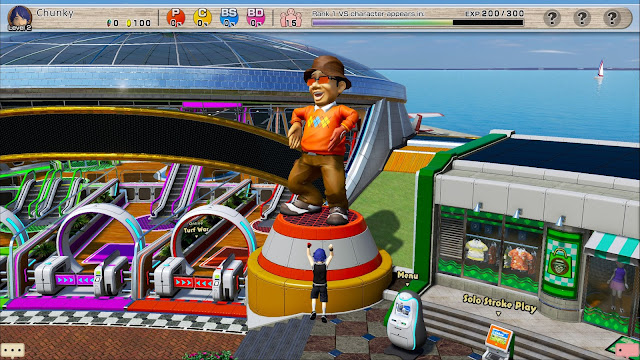 Related reading: For a very similar game on Nintendo 3DS in terms of how it plays, there’s Mario Golf: World Tour. Matt’s review.

Overall though, Everybody’s Golf sticks firmly to the fairway, though it swings a little too wildly too often and dumps itself in the bunker at times too. The grind is real, and though it’s enjoyable enough, it’s also a game that’s quickly going to become hostile to newbies, and that’s a problem when so much of the experience relies on the online play.

The fast five with Albey Amakiir: One of the Aussies doing great things with mobile games