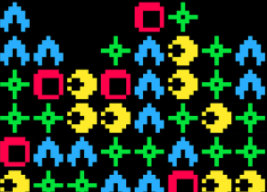 UfoTofU is a game with every characteristic of a smartphone puzzle gem. You might be fooled into thinking it’s a bejewelled clone, but it’s about finding palindromic patterns, and spotting these elusive repeating patterns is both perplexing and addictive. It’s at first reminiscent of 2048 – they’re both games which lend well to quick, 5 minute sessions with simple rules yet deceptively deep mechanics. It’s the kind of game that will have your friends asking for a try, but lend them your phone and you might not get it back for a good while. We had a chance to speak to the developer, Albey Amakiir, about the game, and goals within the games industry.

To check out UfoTofU on the Google Play store, click here.


Harvard L: What are you working on at the moment, and how’s it going?
Albey A: I’m working on UfoTofU, a mobile puzzle game about palindromes. It’s a game that respects your intelligence and your time, and there are no words besides the name and credits. It’s out now and free (and ad-free!) on the Android Play store, and I’m bringing it to iOS soon. After that, I’ll be adding some extra modes and ways to play, before finally moving on to my next project.

Harvard L: What do you think about the state of the Australian game development industry at the moment?
Albey A: I don’t see a lot of it outside of indie development (concepts like “perpetual crunch-time” scare me off). I understand the so-called “AAA” space is pretty weak in Australia, but the indie scene is doing some interesting things and winning awards. The culture is pretty good if you want to meet other devs, too. IGDA has a monthly meetup in Sydney, and there are gamejams that happen all over.

Harvard L. What recent game would you recommend to people at the moment, and why?
Albey A: I haven’t been playing many recent games as of late, but there’s an upcoming stealth platformer called Wildfire that I’m looking forward to, and have played early versions of at game developer meetups.

Harvard L: What’s something you love about the general games industry at the moment, and what’s something you wish would change?
Albey A: I want developers to be able to make games for the games’ sake. Ads, microtransactions, day-one DLC, and many other pains in the industry exist because people want/need to make money. I want to see what games look like in an alternate universe where there are no financial pressures.

Something I love, though, is that there are developers who try to make games from that universe whenever they can.

Harvard L: Hatsune Miku; yes/no?
Albey A: She seems cool. I hear she doesn’t write her own songs… but she has a fantastic range of pitches she can reach, and never loses her voice! 😛