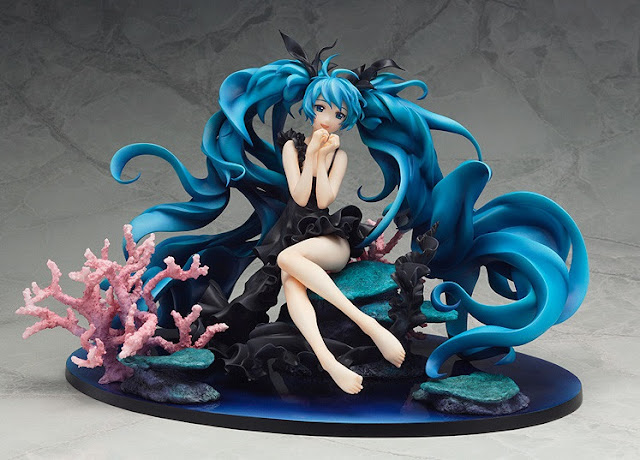 It’s Hatsune Miku’s birthday in six days! The world’s greatest virtual idol and superstar was first unleashed on the world by Crypton on August 31 ten years ago now, and she hasn’t looked back.

As everyone that follows DDNet knows, I’m more than a little enamoured with Miku. Since first encountering her via the original Project Diva f on PlayStation Vita, I have become a huge fan, collecting dozens of CDs, video games, and other collectibles. But most importantly to me is my collection of figures. There are a lot of Hatsune Miku figures produced, and I make a habit of picking up a couple more every time I make a trip to Japan. It’s not the cheapest of hobbies (figures can range up to $300 or more), but over the years I’ve ended up with 42 of them, and have no intention on slowing down now. Everyone’s got to have a hobby, right?

In celebration of the 10th anniversary of Miku I thought I’d be a bit indulgent this week and share photos of the ten figures in my collection that are my absolute favourites. 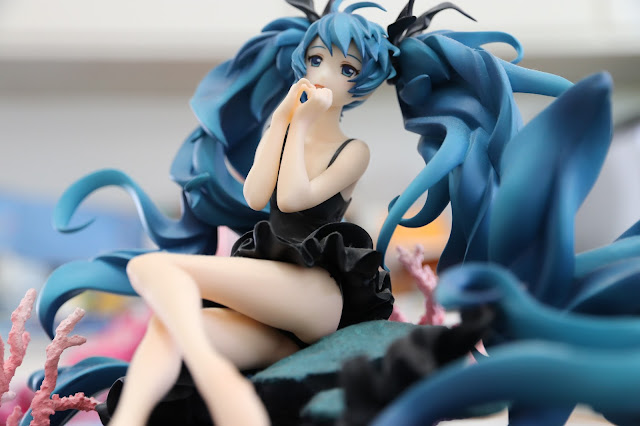 This figure has the most gorgeous diorama to go with it, with the rock that Miku’s sitting on, as well as a coral reef nearby. That, plus her hair, which has been sculptured to look like it’s swaying in the ocean, makes for a beautifully calming and serene scene, and this figure is one of elegance and beauty. The song that it’s associated with isn’t even a favourite track, but this figure is something special. 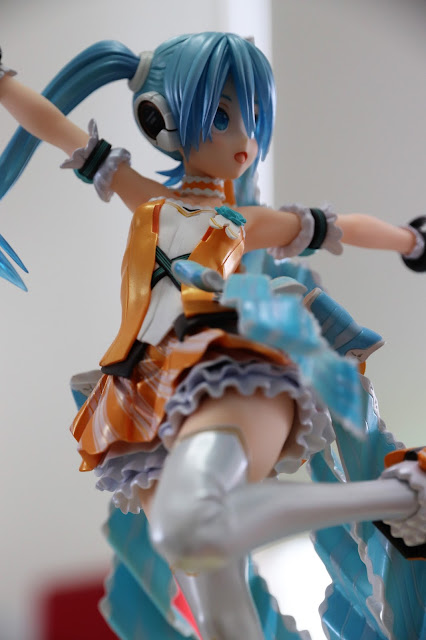 This figure is so bright and happy. It’s a true “idol” style costume that Miku’s wearing in this figure, making it look like she belongs with the Love Live girls (hey now there’s an idea). The detail in the dress is quite exceptional, and the orange colours are so bright and vibrant, especially when paired with the light blue ribbons that trail in the background. The colours almost clash, but the layered effect of the two makes for something visually striking. 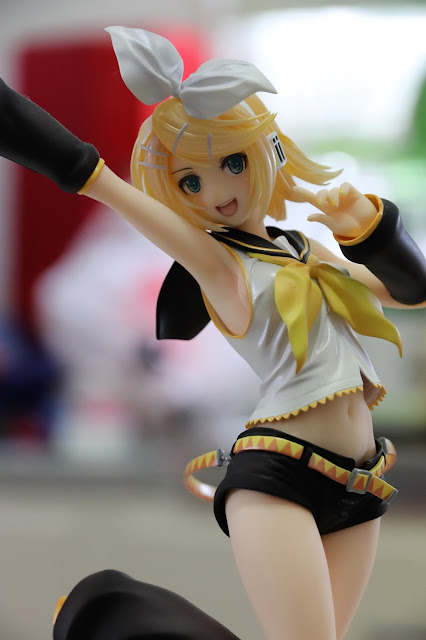 Okay so I cheated a little and decided to add one of Miku’s buddies to the list, but only because Tony Taka is a master artist, and his take on Miku’s fellow Crypton vocaloid, Rin, took me from really not caring for the character at all to being a big fan. This is Rin’s default costume, but with the Taka twist; the shorts are far shorter, and that belly is immaculately sculptured. I also rather like the way the short’s button is undone – very subtle, but very sexy. It’s a lovely, dynamic pose, too. 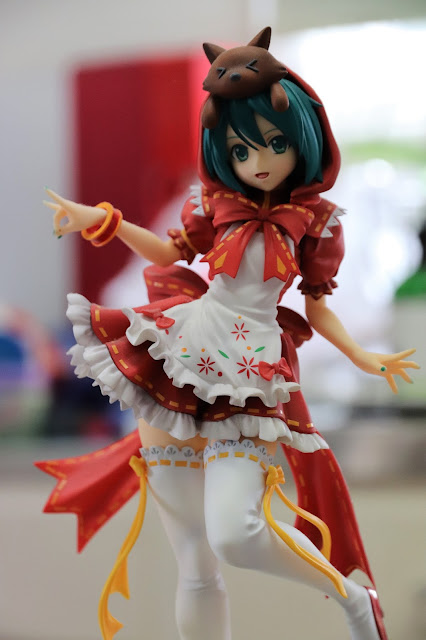 The most noticable thing that I instantly love about this figure is the stuffed wolf on the hoodie. That’s all kinds of cute and adorable. But, more generally, this is a really lovely figure, with a stunning pose that really emphasises the frills on the dress. The yellow ribbons give the figure some colour tonal variety, which helps a great deal, as this is also one of the few Miku figures that doesn’t rely on making a big deal of her hair to be distinctive and interesting. 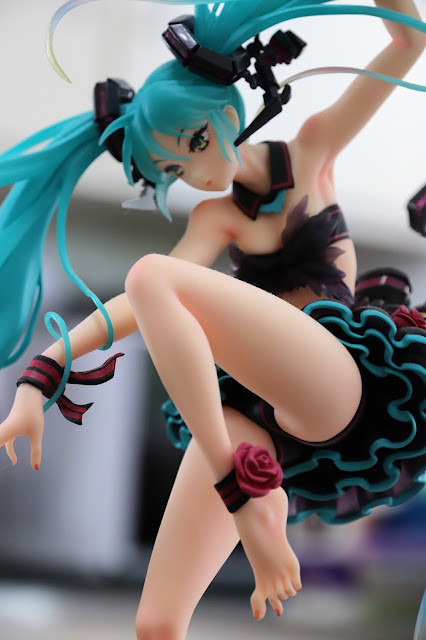 This is actually the most expensive figure in my collection, and it is so incredibly impressive. It’s Miku as a ballet dancer, so the pose captures all the beauty of ballet in a amazingly dynamic pose. What’s really impressive about this figure is the sheer attention to detail; look at that rose around her ankle, or the rippling muscles of her torso. As a fan of both ballet and Miku, this one captures the best of both worlds. 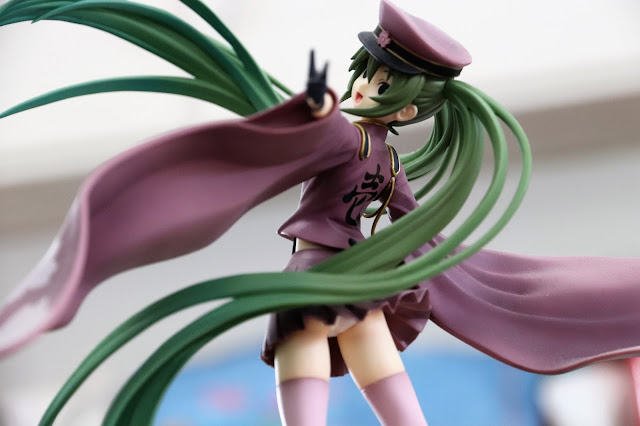 This figure’s whipping, flowing hair and the wings on her arms make for an exciting, dynamic pose. This is one of my favourite Miku songs of all, and the costume is a deligtiful reminder of the song; classical Japanese formal wear, an intricate paint job that includes that character painted on to her back, and the cutest little cap, which you can indeed pop off an on as you wish. 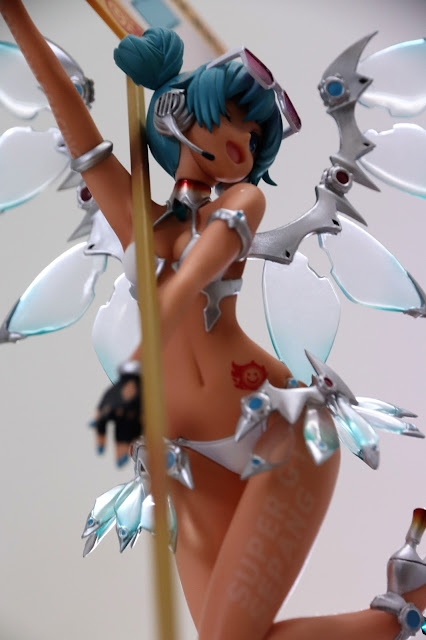 I mean, obviously this one’s super-sexy. Racing Miku is the saucier side of design for the character, and this figure certainly plays up to that; it’s a bikini and not much more. But while bikinis can be very dull costumes for a figure (after all, there’s not much movement in them to create that dynamic effect), this one really consolidates its nature as a premium figure thanks to its delightfully detailed stamps on Miku’s body, as well as the see through wings on her back. It’s a great pose, too. 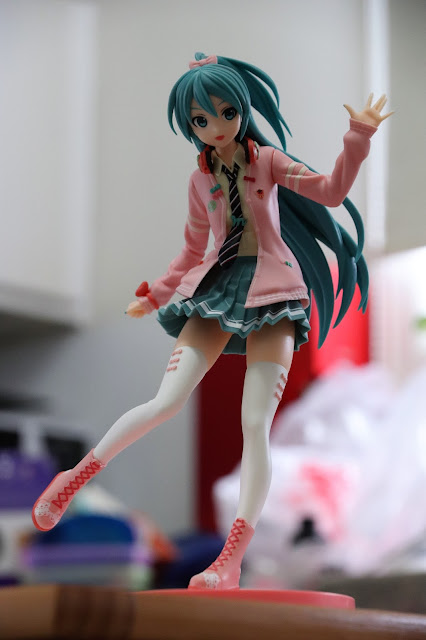 This figure is actually one of the cheaper in my collection; the line around Miku’s shoulder blade is because that arm is detachable, where the more costly figures don’t have such awkward detachable parts in order to save on manufacturing costs. That being said, this is one of my favourite Miku costumes of all; I love the soft pink, and I love Miku’s hair being done in a way that isn’t twin tails for a change. As a result, “cheap” or not, this is one of my favourite figures. 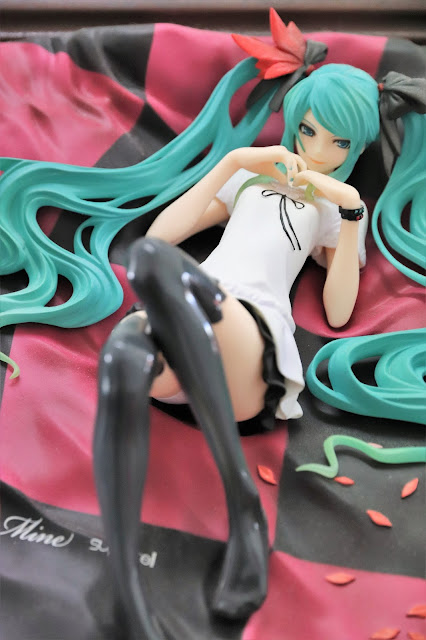 What I really love about this figure is that it has a frame. Miku’s post is lying down (which is why it’s flowing the way it is), and the background, which creates the effect of bedsheets or silk, is magnetised, and has a stand on the back of it. You can therefore “stick” Miku into the middle of the frame and then stand it up, like some 3D work of art. It’s different and stylish, and a good way of making something of a pretty, but ultimately fairly plain dress. 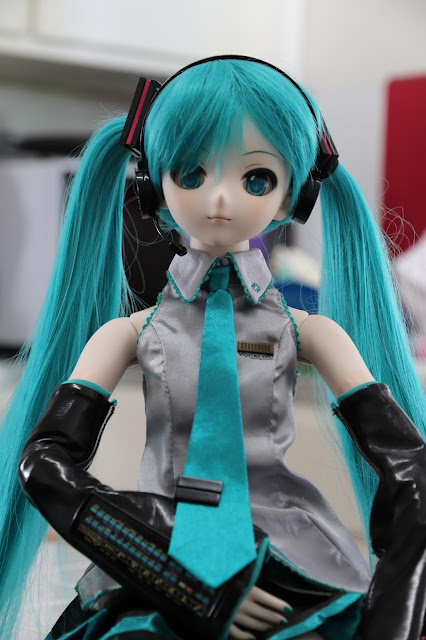 Okay, so I cheated again; but this is my list and I can cheat as much as I like. Dolfie Dream isn’t a figure; she’s a ball-jointed doll, and she’s the absolute pinnacle of my Miku collection. This doll isn’t cheap by any means, but the level of detail in the costume is incredible, and as you can see from the photo, though this doll you can get a sense for just how hard it must be to look after hair when it’s as long as Miku’s. You can get alternative costumes from Dolfie Dream, all immaculate in their detail, but to be honest I like the original; it is the Miku, after all. 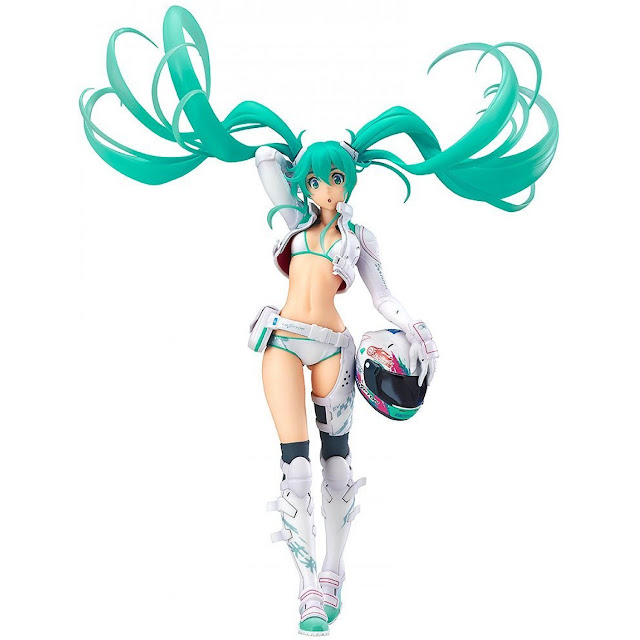 This figure would be in my list, but I haven’t managed to get my hands on my own one, just yet. She’s on order and waiting for me in Japan when I get there. I love love love this figure, those hotpants and the motorbike gear, as well as the pose, is exactly what you’d want from a “Racing Miku” figure. The movement of hair, suggesting it billowing in the wind, adds to that wonderful pin-up aesthetic.