I’m sure you remember Root Letter – our editor-in-chief Matt gave the visual novel 4.5 stars in his review, which can be read here. Developed by Kadokawa Games as the first “Kadokawa Games Mystery” title, it strives to faithfully reproduce Japanese culture and locales; the game features some of the most beautifully reproduced landscapes I’ve ever seen in a visual novel by recreating the real-world setting of Shimane Prefecture. The art isn’t even the most exciting part of Root Letter: the game is a full-on murder mystery! And what better medium is there for a murder mystery adaptation than live-action film? 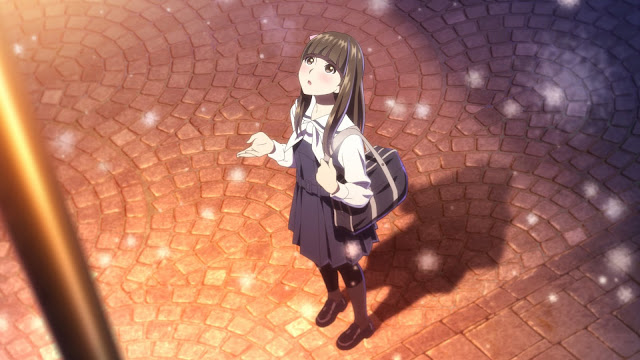 Chinese production house Perfect World Pictures has reached an agreement to produce the film. The project is in incredibly early stages so there is not much information available. However, expect to see more news by the end of the year. Regarding the newfound collaboration, Miao Meng – VP of Marketing and Distribution for Perfect World Pictures – says, “The convergence of and interplay between movies and games can vastly expand the range of uses for high-quality IP resources while stimulating creative thinking, widening to the largest extent possible how the two can be used in the broader culture and entertainment industry. Japanese ideas and scenery are of great interest for our markets. With Kadokawa Games, starting with Root Letter, we look forward to exploring further video games IP possibilities.” It sounds like there is interest in future titles from the developer as well, which adds to the excitement.

Root Letter is currently available for PC, PlayStation 4, and PS Vita. In Japan, the game has also recently been released on smartphones (I’m making puppy dog eyes from afar directed at Kadokawa Games to release the game to mobile devices for the West as well). The story is centered on your pen pal Fumiyo Aya, who went missing 15 years ago. When you discover her final letter, which you had never read until now, you learn she had committed a murder. This prompts you to unravel the truth behind what really happened by going through past letters and speaking to seven witnesses. Maybe she didn’t murder anyone. Maybe she wasn’t even real…

Final Fantasy XV is a darn good game (an understatement to say the least) and the DLC that has been made available to date certainly adds to the experience in a positive manner. There’s also a mobile version of the game currently available, although that is something I prefer to ignore: a tower defense game that really seems to have very little to do with FFXV past the name and characters. This past week, Square Enix announced that the FFXV world is expanding even further, with Final Fantasy XV Pocket Edition for mobile and the Assassin’s Festival DLC for the base title. Pocket Edition is freaking adorable, so let’s take a look at that first:

What you’ll notice immediately is that FFXV Pocket Edition is a quite literal stripped-down version of the original game, complete with graphics changes making the characters all top-heavy and seriously adorable. Hajime Tabata, FFXV’s director, did have input at the initial design stage and regarding the art style. The game includes a lot of familiar mechanics: the skill tree and cooking are still there, for example. The voice actors are the same, and Prompto still promises to be my favourite due to his consistent light-hearted quips. Even attacking is similar, with co-op between the characters being key to victory. When the game launched for iOS and Android later this year, the first chapter will be free. The following nine chapters will have a cost, although we don’t know what that will be yet. All I know is that I’m starting to clear gigs of space on my phone now so I’m prepared for later!

And now we move onto the Assassin’s Festival; you can find the trailer here. Yes, I mean *that* kind of Assassin, the kind that warrants capitalisation. The Ubisoft kind of Assassin. Sure, Mario and Rabbids is a cute team up, but does the Assassin world ever fit in with that of Final Fantasy XV! The festival is free DLC for Final Fantasy XV (PlayStation 4, Xbox One, coming to PC early next year) and runs from August 31 to January 31. The town of Lestallum is taking over by the festival. The DLC includes Assassin’s Creed-like gameplay, mini-games, and exclusive items (Assassin’s Robes, etc.). There is some overlap in timing with the current Moogle Chocobo Festival, which is currently running until late next month, but that really doesn’t impact the new event in any way.

Rule your own country once again in Reigns: Her Majesty

If you follow me on Twitter, you’ll know that I’ve been babbling about Reigns: Her Majesty. I adored the original Reigns, developed by the beloved Devolver Digital. The game was Tinder meet monarchy, with the player making choices as the king by swiping left or right. Each decision has an impact on one or more of the country’s resources: church, population, military, and money. You can see which will be affected, but not by how much. Once a resource hits zero, your king will somehow be dethroned and his heir will take his place. Rinse and repeat. To say it’s addictive would be a downright lie; it is far more than just that. After reviewing the game for PC, I bought the iOS version because it’s the perfect platform for the swipe-based title. Now the king is dead yet again, but this time it is for good. It is high time that a queen that rises to power!

The queen(s) will be helped along the way by the Banker, the Chamberlain, the Doctor, the Fox, the Handmaid, and the Witch. I’m already quite fond of the Handmaid, as she has flowing red hair that I am extremely jealous of. The court is far more feminine than that of the king; for example, the Doctor is now a woman. I’m only realizing while typing this how masculine the original title was… luckily, Devolver and Nerial have recruited Leigh Alexander as writer, which makes me downright tickled pink. Let’s show how women do in power! I had one king who lasted less than a single day, so I’m quite sure all of my future queens can at least do better than that.

Reigns: Her Majesty will be released before the year is up, so the wait won’t be much longer! The game was teased as early as January, but this is the first time we’ve seen or heard anything official about it; I have much respect for the marketing strategy here, dropping hints like Hansel and Gretel dropped breadcrumbs until the developers are close (-ish) to the targeted release period. The title will be released on PC/Mac (via Steam), iOS, and Android systems.

If I didn’t already know, one glance at the art style and it would be obvious Square Enix has its hands all over Secret of Mana. Cutesy characters are reminiscent of Kingdom Hearts and slightly resemble those in the upcoming Final Fantasy XV Pocket Edition. The 3D remake of the 1993 title features high-resolution graphics, voice-overs, talk events, upgraded gameplay, and a refreshed musical score. That list does little good without seeing the title in action, so watch the trailer here:

For those Millennials at the opposite end of the spectrum as me – I’m an early one, so I was a child when the original game was released – Secret of Mana is about Randi, Popoi, and Primm as they battle the empire (it seems there’s always an empire, eh?) to reclaim the power of Mana and restore order to the world. The story is typical of JRPGs, but don’t mistake that to mean it is repetitive; Secret of Mana may be one of the greatest of all time in the genre.

The Secret of Mana remake will have a worldwide digital release on February 15, 2018 via Steam, PlayStation 4, and PS Vita. Combined with the pending release of FFXV on PC, Square Enix looks to be starting out 2018 with some strong competitors for GOTY in the titles’ respective categories. Japan will also see a physical release for the PlayStation versions, with those ordering from Amazon receiving a copy of the user manual included in the original release. The Japanese Square Enix e-Store will also feature a collector’s edition including the game, a pop-up book, a music CD, and three figures of the protagonists. Worldwide pre-orders from the PlayStation Store include Moogle and tiger costumes for each of the trio and three PS Network avatars. Steam pre-orders and first-week purchases include the costumes and a digital wallpaper.