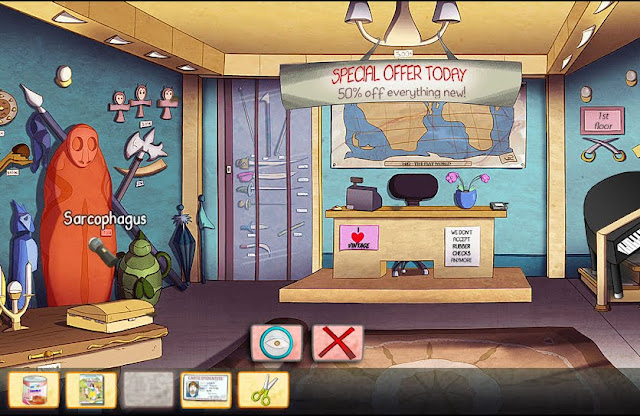 I tend to go into point-and-click adventure games with a positive bias; I adore the genre’s classic gameplay and narrative structure, and I tend to seek out the good until it overshadows the bad. Then comes Demetrios, a game I wanted so desperately to enjoy. A crude game in my favourite genre? Yes please!

Before I even began playing, I was given the option to chose the level of toilet humour I would encounter during the game. Toilet humour can be good when done correctly, so of course I was all in. No lack of poop jokes for me, thanks very much. The fart jokes tend to make me crack a smile. I can’t believe I’m saying that fart jokes help a game, yet here we are…

Bjorn is an antique dealer who is robbed one night after coming home drunk. The cops won’t help him, so he investigates the crime himself with the help of his neighbours, Sandra and her daughter Caroline. It turns out there are ancient legends telling of King Demetrios of Nogo, and the trio must find all of his stone tablets to save the world. One problem, though: the thief is after the exact same thing. It’s what they stole from Bjorn to begin with.

I have no idea why Sandra and Caroline, or really anyone for that matter, would both believe and want to help Bjorn. Bjorn is, to put it lightly, a complete asshole. Every now and then he has a moment of genius or hilarity, but most of the time it’s useless for him to be opening his mouth at all. The lack of a protagonist that I actually enjoy makes it very difficult to like the game as a whole. They don’t have to be angels, but they also can’t annoy me with every passing second. Bjorn annoys me so much I want to somehow both pull out my eyes and block my ears simultaneously so I never have to hear or see him again. He’s like the bad ex you never want to run into again.

The gameplay in Demetrios is very much classic point-and-click. A cursor is displayed on the screen, and can be used to select from any number of objects. To solve a puzzle often involves returning to past locations and giving them a fresh poke around. This is common in this genre of game. What isn’t common, and what I despise, is that this title relies on using large volumes of items to click on to set the difficulty instead of actually thoughtfully creating puzzles. Locations can be travelled to via the map.

Related reading: One of my favourite contemporary point-and-click titles is The Little Acre – read my review here.

Puzzles are probably the best part of the game. I did quite enjoy tricking a cop into taking coconut ice cream that was really just a deodorant-slathered ice cube in an ice cream cone. Puzzles often involve combining items, either to use them or give them to other characters. The combinations are quite logical, but finding the minuscule items that are often sub-items that couldn’t be clicked on before is infuriating at times. Instead of items being hidden in clever locations, the game aims to overwhelm the player with large amounts of objects to sift through. That’s the only thing that really takes a lot of time in the game. 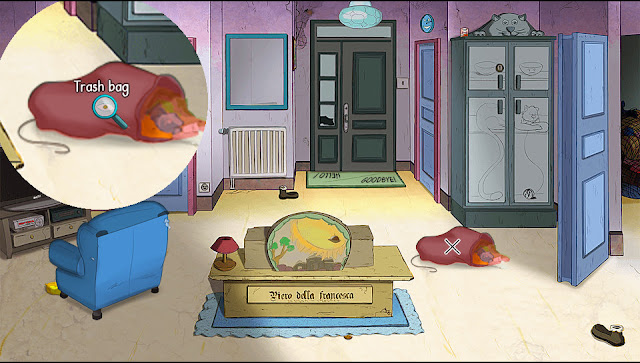 The graphics in Demetrios increase my score of the game slightly. I quite enjoy the cartoon look and the bright colours, although does seem as through the title is just a scaled up version of the Vita version so things don’t seem terribly sharp. Where I curse the volume of objects for gameplay, I do have to praise the artists and designers for how the are able to include everything while locations remain fairly simple in terms of looks. It would be easy for places filled with dozens of items to look cluttered – and sometimes that is the case because it’s what the location calls for – yet they often do not.

Demetrios originally released on the PS Vita (Britta liked the game more than I did; her review is here), but you would never miss the touch screen in this PlayStation 4 release. The interface makes perfect sense and is easy to navigate, minus the fact I always hit circle to back out of something and that’s not what it does here. Bjorn can easily access his phone by using the menu at the top of the screen, or combine items by sorting through them at the bottom. I quite like the way the developer has assigned the DualShock’s joysticks, as the left moves the cursor at a normal speed whereas the right stick allows the player to zoom in and move the cursor more slowly for precise movements.

Each location includes three hidden cookies. These cookies act as hints; there is a limited number of cookies, therefore there is a limited number of hints. Sometimes the cookies are hidden extremely well, other times they seem as big and bright as the full moon (although in actuality the cookies just look like tiny digital cookies). Hints begin as vague – such as telling you to look for clues at the scene – and as Demetrios eats more cookies trying to solve a single puzzle, the hints get far more specific – such as giving the exact location the item needed to help can be found. 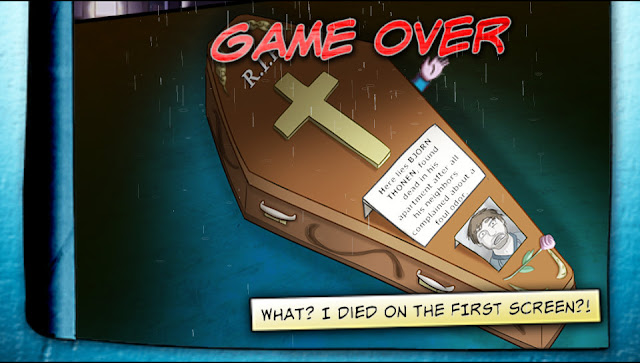 There is something very unusual about Demetrios, compared to other point-and-click adventure titles, that is worth noting: Bjorn can die. That’s right, folks, for once the characters can have an awful death. Or be thrown into jail, as is more likely for Bjorn I find. Regardless, it does add a touch of humour to the game before depositing the player exactly where they were prior to the incident that caused Bjorn’s arrest/death.

I like to read the opinions of other critics after writing my own reviews of games. After finishing this review of Demetrios, I did what I always do. And I was surprised to see the overwhelmingly positive review scores from other outlets. So I did something I rarely do, and returned to the title. For the second time, I found myself actively seeking out the good. It does have its moments. Some of the one-liners make me snicker, and the gameplay is decent despite the fact it relies on throwing overwhelming amounts of items at the player to slow them down. But Demetrios is nothing that great. Or special. The crudeness is unnecessary. The amount of things to sift through is unnecessary. And unfortunately, nothing entirely makes up for these downfalls.