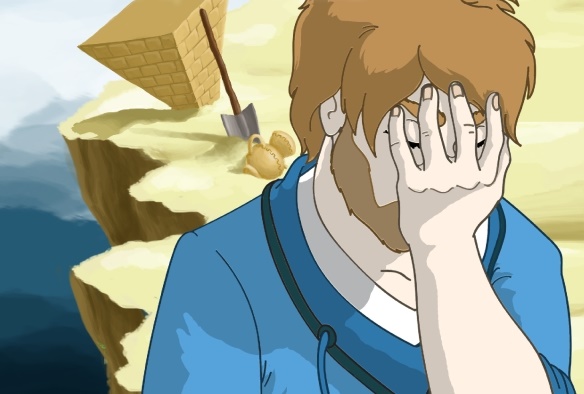 “I fart therefore I am.”

Thus speaks our hero – or rather anti-hero – Bjorn Thonen, a Parisian antiques dealer whose shop is stocked with what can only be described as secondhand cast-offs of dubious value. He is the archetypal thirty-something man-child: a slob with questionable hygiene habits and a drinking problem, his intellect a potent mixture of cunning and mind-boggling naiveté. At one point he reflects poignantly “growing up is so cruel for your inner child.”

We meet Bjorn after a night of heavy binging as he inspects his dishevelled apartment, and a bump on his head, to find all his money gone – and an antique tablet from a mysterious statue resembling a chicken with a Mohican hairdo vanished too. This is of course where the madcap adventure begins, with his neighbour Sandra and her eight-year-old daughter Caroline soon embroiled in Bjorn’s investigation and life.

But first, the player is introduced to the gameplay features, and the protagonist, by investigating his apartment. The key aspects of a point-and-click adventure game are nicely streamlined for trouble-free playthrough, such as the item drawer, hot spot highlighting for each tableau scene, and a system menu which updates your current objective as well as giving you access to the “cookies” you can hunt and collect in each scene. These cookies can be consumed by Bjorn if you need a hint for solving a puzzle. 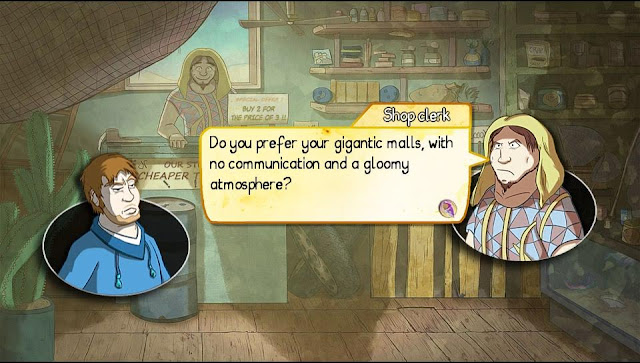 Clicking on each item to figure out whether a clue is hidden there is a time-honoured staple of this genre. It also happens to be my least favourite activity, easily turning any adventure game into a boring, drawn-out yawn fest. Here, we are straightaway introduced to Demetrios’s refreshing take on investigating: tickle your funny bone while also revealing Bjorn’s personality via his off-beat comments. By the time he left the apartment and had his first chat with Sandra, the slob – who keeps an ‘antique’ coffin in his bedroom and has his TV permanently stuck on the cooking channel – had managed to worm his way into my affection.

This is not a new approach, of course. Broken Sword and many other adventure puzzle games rely on humour, and indeed the iconic Broken Sword series is a direct inspiration for Demetrios, as the developer has explained in interviews. Demetrios has, however, taken one step further: all characters are flawed and each one is exposed to loving yet merciless ridicule. Humour is elevated to being the main vehicle of the narrative, and it all centres on Bjorn’s unmatched ability to pick, out of a plethora of sensible solutions, the one guaranteed to lead to a laughably disastrous outcome. This is not just a ‘shtick’, it is a psychological aspect of Bjorn’s child-like attraction to doing what so patently, obviously should not be done. Tell me: have you ever been irresistibly drawn towards doing something forbidden, something that reason whispers is folly to attempt? As a child, when seeing a sign that says “Don’t spit into the fountain!” – what would you have done? C’mon… it’s practically begging you to spit!

This is, in my view, the brilliance of Demetrios’s script. Every increasingly absurd situation Bjorn stumbles into and applies his wonky logic to, somehow, to the bafflement of all (especially the villains!), brings him one step closer to solving the mystery of the statue and the missing tablets. The game delights in taking this absurdity to its logical conclusion by ‘rewarding’ the player with Game Over achievements whenever you manage to dispatch Bjorn to an untimely death or incarceration. You start out with Bjorn sticking a finger into a power point (“I’ve always wanted to know…”) in his apartment, and work your way steadily up the ladder of ludicrous demises. 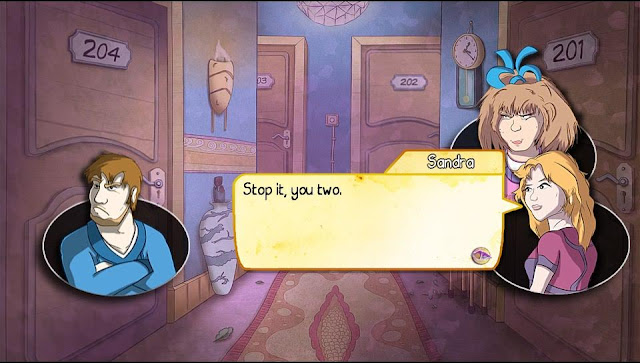 This is counterpoised by the down-to-earth, practical logic you need to apply to solve the puzzles. Demetrios is not in the business of ruining your weekend with brain-melting, devious conundrums. The puzzles are occasionally taxing yet never injurious to your brain health. Solutions make good common sense, overall; they help to keep the game grounded and provide some extra fun in the form of using and combining items.

Here we encounter Demetrios’s other strategy for making sure the player does not get bogged down in endless circuitous quests for items you need in order to acquire other items, which in turn you need to solve puzzles… you get my drift. This game keeps its eye firmly on the storyline. No fetch quest or puzzle will ever hold you up unduly, but propel you forward and keep the narrative momentum going. Even the mini games are kept brief – there is a variety from fishing to pinball to gallery shooting – and only completionists need to pursue them at length.

I love playing games that take me outside my regular Anglo-American cultural environment, and with Demetrios (the first game by a one-man French studio, Cowcat), if you take the trouble to look beneath the surface, you’ll find rich pickings of the French love of persiflage (a form of banter with mocking undertones) in the dialogue. For example, Sandra is a recent arrival from the country, and Bjorn displays all the typical Parisian prejudices about provincial ‘backward’ folk in his dismissive asides. 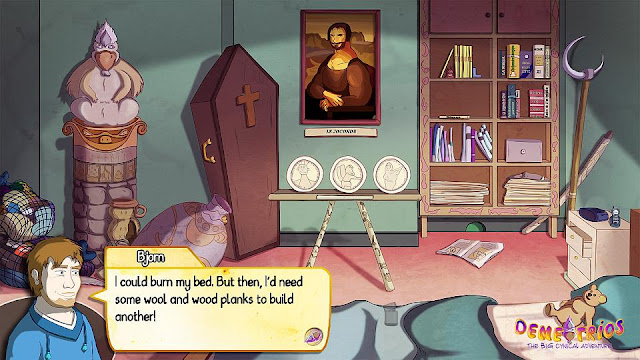 Bjorn meets his match, however, in Caroline. She detests him and regards him as a dolt, taking the concept of “Schadenfreude” to a new level of perfection in their interactions. Those two never stop bickering; their relationship is a highlight of the game for me, with Caroline’s pre-teen personality captured with wicked insight. Her love of mobile gaming allows the developer some easy, yet nonetheless amusing, pot shots at popular gaming culture. We even get a few fourth-wall-breaking jokes related to video games throughout Demetrios, but always with an eye to not undermining the story immersion.

Another very French, yet also universal, theme that runs through Demetrios is casual racism.

The greater part of the game (chapters 3-6) is spent in the fictional country of Nogo – a place that looks like it could well have been one of the forgotten corners of the French colonial empire. Bjorn wears his ethnic preconceptions on his sleeve; he doesn’t set out to insult the natives, but does so very effectively because of his unquestioned assumption of cultural superiority. Sandra, in a neat psychological twist, starts out gushing about how she wants to experience a foreign culture, but recoils at the first sight of a local delicacy infused with camel urine and reverts quick smart to the safe ground of “… but they have disgusting habits”. Demetrios is not afraid to expose attitudes towards a culture different from our own and can even make us feel a tad uncomfortable at times; not enough to spoil the fun, but enough to make you stop a moment and compare Bjorns’s often fatuous remarks with what you may encounter in your own surroundings. 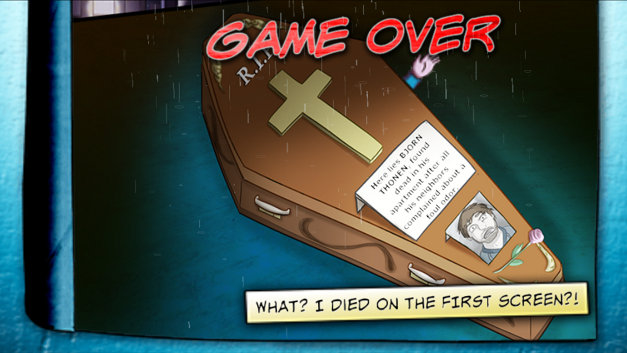 The most contentious aspect of Demetrios is without a doubt what is generally referred to as ‘toilet humour’. Again, I would ask that you consider cultural differences before judging the game as indulging in gratuitous “gross humour”. Continental European culture has a somewhat different attitude to matters of bodily functions, compared with the more prudish Anglo-American reaction. Only last week, we saw the famous French satirical magazine Charlie Hebdo picture a broken-down Angela Merkel on a toilet seat, panties around her ankles, on the cover of their first German edition. French humorists do not pull punches. Bjorns indulgence in scatology is commensurate with his stunted development, stuck as he is in a childhood world, unable to cope with modern life as an adult. What else can you do at a police station, where you encounter Kafkaesque levels of abstruseness, except express your frustration by … no! I won’t spoil the fun!

I love the fact that the developer of Demetrios dealt with complaints and criticism by way of a humorous yet practical response: he introduced a Toilet Humour option right at the start of the game. Take your pick!

The overriding focus of any point-and-click adventure game has to be on the excellence of the story, well fleshed-out characters, as well as puzzles that are germane to the story and enhance it. On all these counts, I believe Demetrios delivers, notwithstanding a few minor stumbles. It is particularly welcome on the Vita platform, which lacks a wider range of games in this genre. The game runs smoothly with minimal loading times, and the bubble icon looks very cool indeed, to boot. 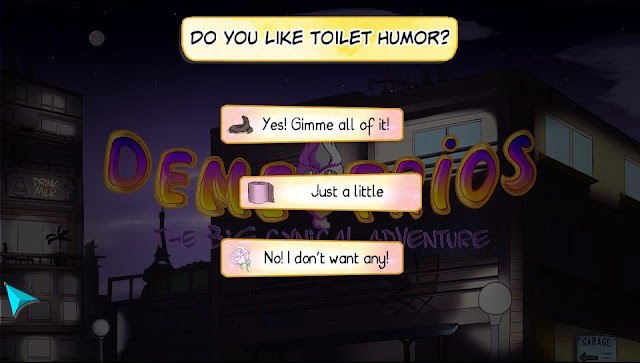 I’ll close this review with another French cultural reference that brought me happy nostalgic memories. Rummaging around Bjorn’s bedroom, I came across his stash of much-loved comics. They are referred to, with the usual Demetrios-style mangling of names, as “Tantan, Anthrax, and Lucky Lake”. I take these to mean the great classics of Franco-Belgian comics that I devoured and adored as a child, back in Europe, too: The Adventures of Tintin, Asterix, and Lucky Luke. For me, Demetrios belongs as much in that venerable tradition, as it does in the Broken Sword video game tradition.

The Digitally Uploaded Podcast is back! We talk Final Fantasy XV, game awards, and plenty more besides!