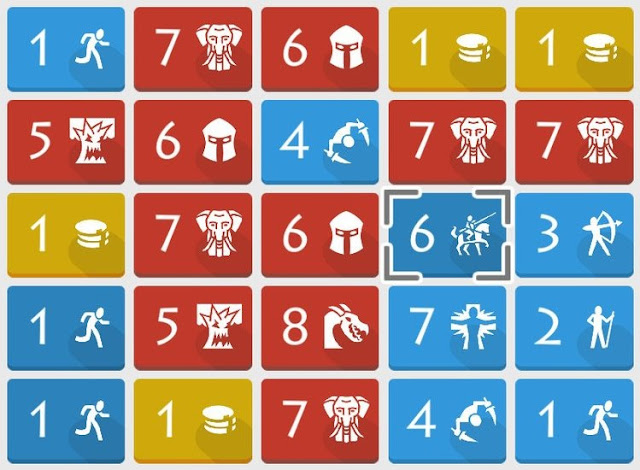 It was inevitable that the Nintendo Switch would eventually get some kind of Threes clone, and Levels+ is definitely a Threes clone. It’s the right kind of console for this kind of puzzle game; it’s the kind of quick, mentally stimulating experience that’s perfect to unwind with on the train home after a long day’s work. But let’s face it, it’s hardly original, and the presentation of the game leaves a lot to be desired.

I’m sure just about everyone’s played Threes by now, or at least a clone of the original, but I’ll give a quick summary for how Levels+ plays, as there are some slight variations to this one in comparison to Threes. There’s a playing field made up of a number of tiles, and these tiles are split into three different categories; there are blue ‘hero’ tiles, red ‘enemy’ tiles and yellow ‘treasure’ tiles. Each of these tiles has a number. You can only manipulate the blue and yellow tiles, and the goal is to use them to remove the red and yellow tiles, but for different reasons.

You can combine tiles of the same number that are next to one another on the playing field to ‘level up’ and increase their value. For example, combining two blue tiles of value ‘2’ results in a single value ‘3’ blue tile. You need to level your blue tiles up this way so that they can ‘attack’ more powerful enemies and capture better treasure. A value ‘3’ red tile can be removed from the play field by a value ‘3’ or higher blue tile, so those value ‘2’ tiles that you had were useless for this purpose. The game finishes when you cannot make any more moves, and the quickest way to a game over is to allow the play field to become filled with red tiles, so you’ll need to be constantly removing them. As the game goes on, more powerful red tiles enter play, so you’ll also need to be constantly leveling up the blue tiles to keep pace. 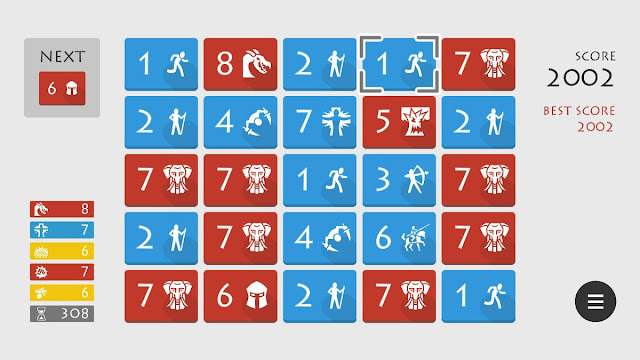 Meanwhile, you’ll be combining yellow tiles to increase their ‘level’ too. Each time a yellow tile is ‘captured’ by a blue tile of an equal or higher value, you score points, and the higher the value of the yellow tile, the more points you earn. It can be difficult to level the yellow tiles, since the playfield is cluttered at the best of times, and clearing away the yellow tiles is important so that the blue ‘heroes’ can reach the red ‘enemies’ that need dealing with, but nonetheless, getting yellow tile levels nice and high is the difference between a high score and a wasted game.

What is great about all this is that randomness plays no role whatsoever in being good at Levels+. As with all Threes clones, with each tile that’s removed from the game, a random new one is added to the play field, but the red, yellow, and blue titles are dolled out in a stable, balanced fashion that means that success in the game is down to strategy, not luck. Just last week we had a review of a card game, Shephy, which was the opposite (success was entirely down to luck), and the difference between the two games in terms of playability is incredible; Levels + is the far more playable game, and getting a high score in this one feels far more rewarding than getting a high score in Shephy, because success is far more reliant on the player.

That being said, I much, much prefer Shephy. Shephy is a powerfully creative game, with a real vision and uniqueness to every layer of it. Levels +’s greatest problem is that it is just so utterly dull. Once I had a high score that I felt was decent enough, I stopped having any drive to play again. 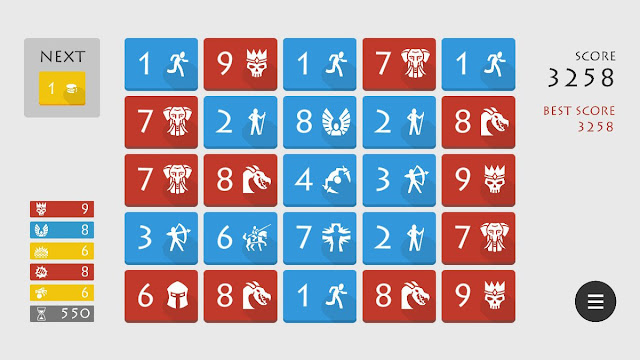 The actual aesthetics of Levels+ are gorgeous in their minimalism; I love anything that makes heavy use of white space, as Levels+ does for the background, and the brightly coloured tiles in the play field sit strikingly beautifully against that background. On the tiles are little icons that depict various monsters, heroes, and treasures, and these are both very cute, and a clever way of giving the tiles an easy context beyond the highly abstract numbers next to them. That in turn helps players connect with what’s going on. In other words, you’re not just combining numbers or having numbers smash against one another to remove them from the play field; you’re combining two heroes to turn them into an even more powerful knight, who is able to attack evil knights that are well beyond the ability of those weak heroes. And then a skeleton lord enters the play field and you stress over how you’re ever going to be able to deal with it.

But the music is cheap and nasty to the ears, and the user interface is clumsy and unattractive; menus look like the kinds of Flash menus I used to make for my university projects, with a poor font and visual design that clashes horribly with the rest of the game’s slick minimalism. Most critically of all is that there’s no online leaderboards, which, in 2017, should be an essential feature for any game that’s purely about getting high scores.

Longevity is hurt further by the lack of goals. Every so often a rare enemy tile will pop into the field of play, and if you defeat it you add it to an uninspired gallery. The rarity of these enemies varies, but it doesn’t mean anything, nor do anything for the game itself. I don’t think I’ve ever been less inspired by getting something rare when I ‘caught’ a very rare icon. By contrast I was singing and dancing when I unlocked Lyn in a wedding dress in Fire Emblem Heroes…. 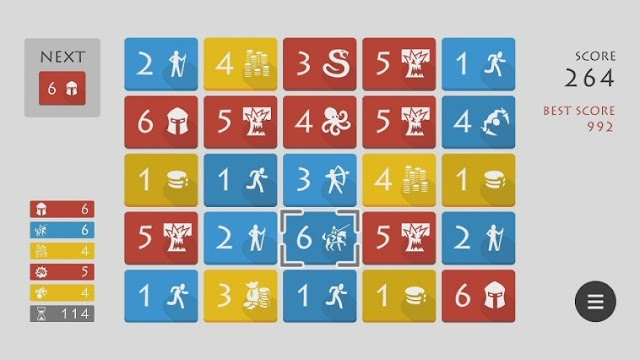 But I digress. There’s also some achievements in Levels+, but again, unlocking them doesn’t do anything, and they’re all ridiculously easy to unlock. Play a half dozen games, and if you haven’t got almost all of them, then you must either really be struggling with the logic of the game, or you’ re just not interested enough to be trying. It’s almost like the development team knew that they only had an hour of the player’s attention, so they might as well give the player everything by then.

What this amounts to is simple: Levels+ is a completely forgettable game. It’s got some gorgeous aesthetics, and functionally it’s a refined, balanced, and perfectly competent Threes clone, but there is no longevity to the game whatsoever, and the lack of an online leaderboard for a game like this is downright amateur.