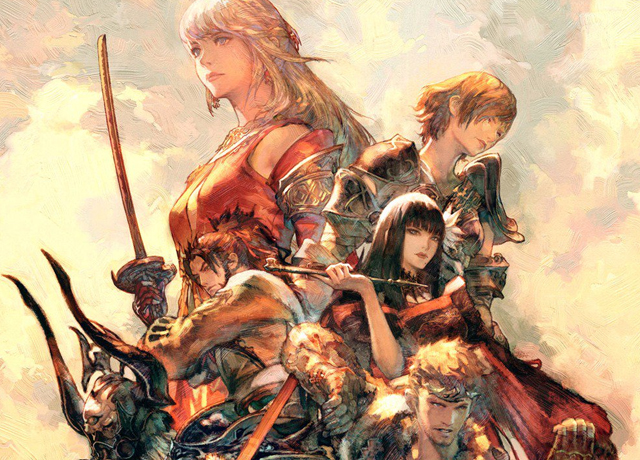 Final Fantasy XIV is a remarkable success story, especially in the face of the ongoing discussion about what makes a good MMORPG. It continues to prove the viability of a subscription model in an industry convinced that free-to-play is the only option for such games. It’s still breathing life into the “holy trinity” approach to party synergy – with rigidly-defined tank, healer, and damage dealer roles – when modern wisdom says such design is too prescriptive. It found a way to make a classical MMORPG work on console as well as it does on PC, and it blurs the line between the casual and hardcore audiences. It manages to tell captivating stories in a genre driven by “content” and giving players an endless list of things to do.

All of that remains true in the latest expansion, Stormblood. And why wouldn’t it? After establishing such a successful formula for the game, Square Enix’s focus is on building upon it by growing the world at tinkering at the edges of the game’s systems, rather than reinventing the wheel. For myself and a lot of other Final Fantasy XIV players, we couldn’t ask for anything more.

Stormblood continues the game’s record of putting narrative front and centre. Typically, MMO stories exist primarily to give context to the game and shuffle people from region to region, dungeon to dungeon. This is true on a fundamental level in Final Fantasy XIV as well, but the story itself has always been compelling enough to stand on its own. It’s that very classic Final Fantasy formula, balancing humour, drama, excitement, and silliness around a core of loveable characters. 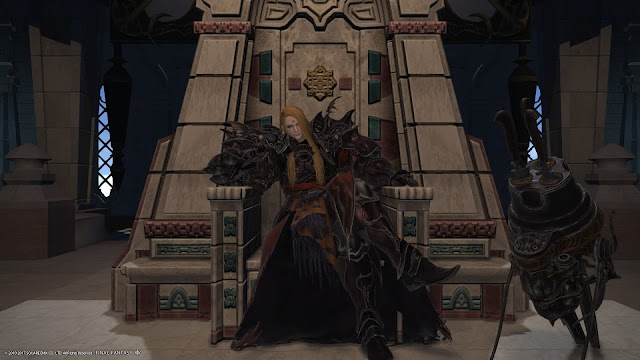 This is every bit as true in Stormblood, which traces two nations’ efforts to liberate themselves from imperial occupation: Ala Mhigo, which borders Eorzea, and the far eastern city state of Doma. Both countries have been under the thumb of the Garlean Empire for 20-odd years, after having their respective attempts at resistance snuffed out. When fate brings the Warrior of Light and her allies into contact with some of the remnants of the Doman Liberation Front, so begins the quest to regain that city from the empire, and to inspire the people of Ala Mhigo to do the same.

Like I said in one of my review-in-progress diaries, Stormblood’s is a very classic Final Fantasy story that sees a group of heroes leading a rebel army against an oppressive empire. For better or worse, it’s a move away from the moral relativism and anti-war themes that were a cornerstone of the previous expansion, Heavensward, in favour of something simple, timeless tale of good versus evil. It’s not without depth, though, and imperialism is a key theme here; as our heroes journey from place to place, spurring rebellion across Doma and Ala Mhigo, we see the toll that imperial domination takes and some different ways that people deal with it.

In the face of such opposition, many reluctantly joined the empire or at least accepted its rule. For the red kojin tribe and the pirate Confederacy, tepid alliances with the Empire allow them to keep at least some degree of their culture and autonomy alive. For the Qalyana and Lupin beastmen, and the civilians living in small villages on the cities’ outskirts, it’s fear and blackmail that keeps them subservient. One of the Empire’s elite combat units is a squad of Ala Mhigans who see cooperation and assimilation as the key to the country’s liberation. Then there are people like the blue kojin, who choose to live in isolation beneath the Ruby Sea, and the Doman Liberation Front, who went into hiding to prepare for a revolution. 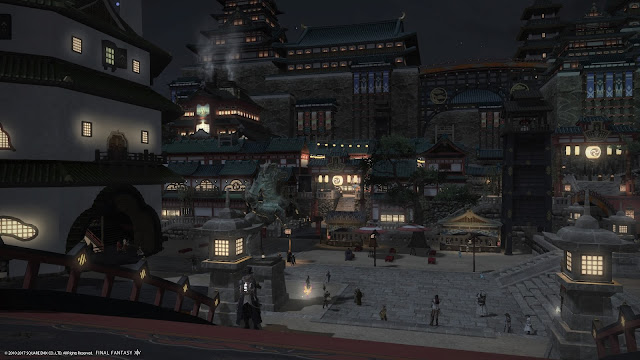 It is, perhaps, an overly simplified look at the issue of imperialism – it’s more of a My First Anti-Imperialism Story, as DigitallyDownloaded.net’s editor Matt S. would put it. It’s an important theme nonetheless, and even if it lacks nuance, Stormblood still manages to provoke thought through the subtext to a story that is, primarily, a source of entertainment.

However, it can be very uneven. The main story quest is very good for the most part, but the final act felt very undercooked to me – an issue that’s compounded by pacing issues. A good quarter of the main story is focused on the efforts from the Eorzean Alliance and the Ala Mhigan rebels to push the Empire out of Ala Mhigo, though there’s only really enough plot and character development to last one or two quests. Dragged out across a few zones and a few levels’ worth of questing, that arc feels both rushed and stretched out, which is never a good thing.

There’s also a lot of inconsistency in the stories told through sidequests and the like. Some are fantastic, with the quest chain surrounding the Omega raid being a particular stand out. It sees the alien robot Omega searching for a worthy rival by holding a sort of interdimensional combat tournament, making for a bizarre tale that knows how silly its premise is and runs with it beautifully (as well as creating context for a bunch of great fights against bosses pulled straight out of Final Fantasy V). On the other hand, there are a lot of quests that do nothing to hide the fact that they’re just there because a quest was needed. I don’t normally take issue with “fetch quests” because they usually at least provide a bit of world-building, but those in Stormblood (and, to be fair, Final Fantasy XIV at large) are rather hollow. 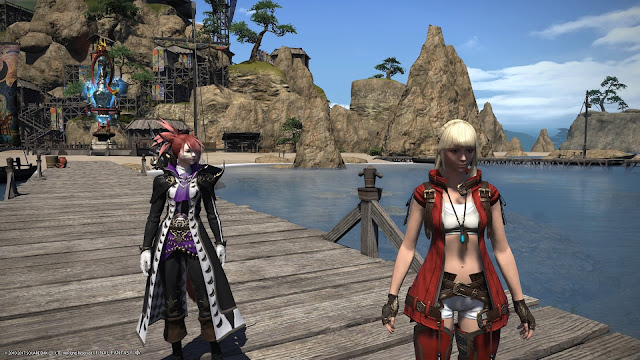 One big issue I have is with the job quest chains. I’ve always found these a bit hit and miss; maybe it’s the choice of jobs I’ve levelled, but they’ve always been a bit dry and lacking in character. That’s more apparent than ever in Stormblood, because the story is almost the sole reason for doing these quests; where once you’d get useful gear and new abilities as rewards, now you simply get a pittance of experience points. If the stories told through the job questlines were worth pursuing on their own merits, this wouldn’t be an issue, but this hasn’t been the case for any of the jobs I’ve taken to 70 yet. The level 70 quest at least gives you a set of artifact armour and your job’s level 70 ability, but everything before that just feels like busywork.

Still, story is just part of the package that is Stormblood; it also boasts a swathe of new places to go and things to do. There are seven new zones, all of which are stunning. Kugane, the new Japan-inspired city, is a glitzy metropolis that combines Edo-period architecture with the skyline of a modern Tokyo. Yanxia is a mountainous region based on Japan and China, and is one of the most serene yet sombre places in Final Fantasy XIV, with natural beauty and rural charm carrying the scars of war. The Ruby Sea is an island paradise, and the one area that makes extensive use of the new swimming ability introduced in this expansion. Gyr Abania, where Ala Mhigo is situated, is an arid mountain highland, so it has a more muted beauty built on sparse vegetation and curious rock forms, but it’s beautiful nonetheless.

These zones are home to a handful of new dungeons, which mostly follow the Final Fantasy XIV formula but nonetheless find ways to introduce creative encounters and locations. One particularly memorable boss isn’t a fight so much as a series of reaction-based puzzles; you can’t actually use your abilities at all, nor can you take damage, but you can fail the trial by making too many mistakes. Lakshmi, one of the new primals, is designed around using a special resource called Vril to weaken attacks that would otherwise kill you, and finding ways to replenish it before the next assault. One boss in Omega has you dancing around a chessboard and, at one point, being transported to another dimension to solve an escape puzzle. These are the more creative and outlandish encounters, but even the more standard bosses manage to take familiar mechanics, like dodging telegraphed moves or turning away from sight-based attacks, and combine them in new and interesting ways. 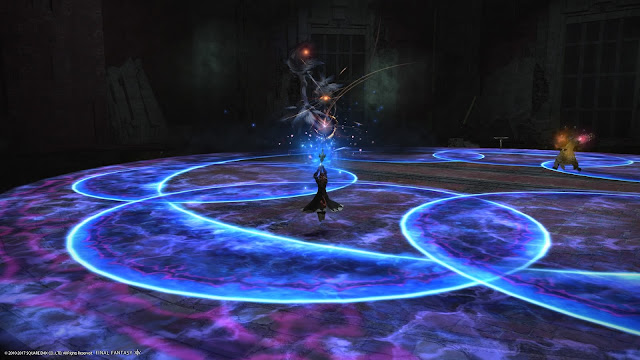 The two new jobs, Samurai and Red Mage, offer exciting new ways to dish out damage in these encounters. Like most damage dealing classes, both are designed around managing resources to deliver maximum pain, but they each come with their own unique mechanics to master. They’re both a bit overpowered at present, and likely to be toned down a bit before long, but they’re still a lot of fun to play – and that means a lot coming from me, as someone who usually finds damage dealers tiresome. The other classes mostly stick to the familiar, but each gets a couple of new toys to play with, from both levelling up and from a revamped Role Action system (formerly cross-class actions). In short, all jobs within each role have a suite of abilities that they share, and there’s no longer any need to level other jobs to acquire them – so all healers have access to Swiftcast, all tanks have access to Provoke, and so on. The catch is that you can set only a limited number of these shared abilities (the exact number varies from role to role), so you have to be selective about which ones to use.

Topping this all off is a range of little quality-of-life improvements that, while small on their own, add up to making Final Fantasy XIV a smoother experience. More inventory space is very welcome, especially with two new jobs to carry gear around for. For high-end duties (extreme primals and Savage raids), you can now use the Duty Finder to search specifically for practice or clear groups, eliminating the frustration of getting a group with different levels of experience and goals. Different-level abilities that are identical aside from damage dealt – like Stone, Stone II, Stone III, and Stone IV for White Mage – now automatically scale depending on your level, so you don’t need to set them separately to your hotbar, which is a huge blessing for console players in particular. There’s a new UI element to help you track main story quest progress. Balance adjustments make tanking at low levels a lot easier.

What this all amounts to is an expansion that doesn’t push Final Fantasy XIV in bold new directions because, quite frankly, it doesn’t need to. Stormblood takes everything that makes the game good and doubles down on it, expanding the world of Hydaelyn and filling it with more to see, do, and experience. Minor issues with its story and storytelling notwithstanding, this is everything I could want from a Final Fantasy XIV expansion.