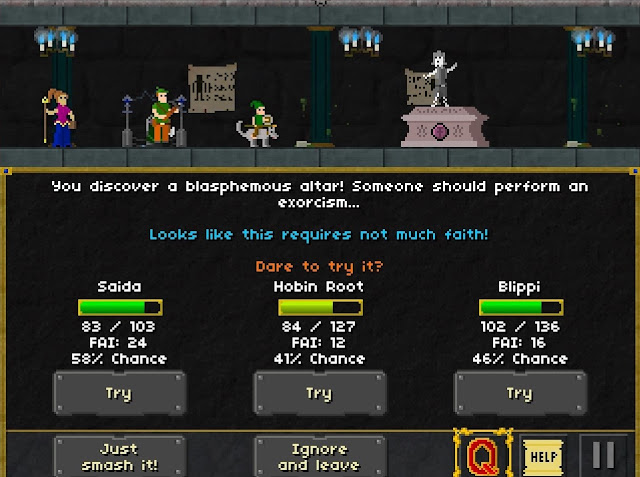 It was a quiet and peaceful night. So much so that you couldn’t stand it any longer and waltzed your way over to the pub. As fate would have it, your search for thrilling entertainment was answered the moment you enter, as you are asked to select adventures who would then set out on a quest through your guidance. The stakes are high with the danger even more so. Will they survive? Will they bask in the glory of success and vasts amounts of loot? That’s really up to how good you are at making choices.

Pixel Heroes: Byte & Magic is a roguelike RPG that is all about making do with what you have. Being a roguelike you already know that several game overs are in your future and, yeah, be prepared to start over a few times. Starting over is easy as you simply select three adventures from those that are currently milling about. Warriors, Sorcerers, Hunters, Bards, and Herbalists make up a portion of what can be found and taken out on an adventure but you’ll need to make do with whatever’s showing up each time; part of the beauty of the game is that you’re not always going to be able to pick your “ideal” party.

Despite the randomness of who’s in the tavern when starting a quest, finding a good balance in your team isn’t as difficult as one may think. Some classes are designed to increase their intelligence quickly allowing for an easier time with magic. The same can be said for physical attributes such as strength and dexterity. Outside of that though, characters can equip whatever items they find on adventure regardless of class, so with some creative thinking you’ll be able to tune just about every character to whatever purpose you might like. 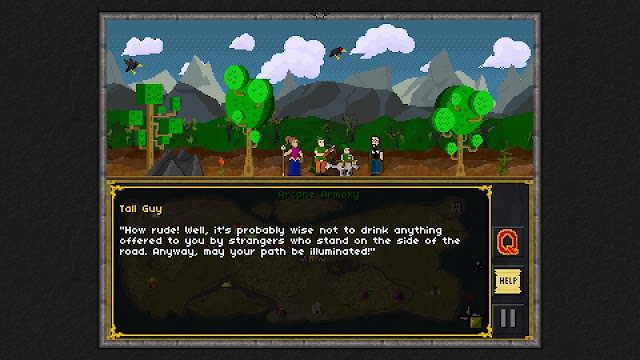 Once your newly formed group has left the tavern’s hall it’s time to hit the street and pick up your quest. After a while I became a bit disappointed that after receiving the quests and hearing the sales pitches, the rest of the game plays out the same each time. There’s nothing “special” about each quest and its location other than having to leave town, have a few random encounters and then enter one of the chosen dungeons on the map.

Once your party enters a dungeon they then move through a series of rooms before facing off against the boss who lies within the last one. That’s if they even get that far! If they do and the boss is defeated then it’s three random encounters back to town in order to gear back up before getting the next quest and doing that same thing all over again. If they fail then they are buried in a graveyard that can be visited later via the main menu.

Combat is where you’ll be spending the bulk of your time in Pixel Heroes, and it doesn’t play out like any traditional turned based RPG. Instead of this, while the two parties are lined up on each side of the screen only one member of their group can act per turn and that member will also be unable to perform a second action right after their first. This automatically stops you from simply spamming your strongest hero’s abilities over and over again until the other side falls down. Thankfully the same applies to the enemy. 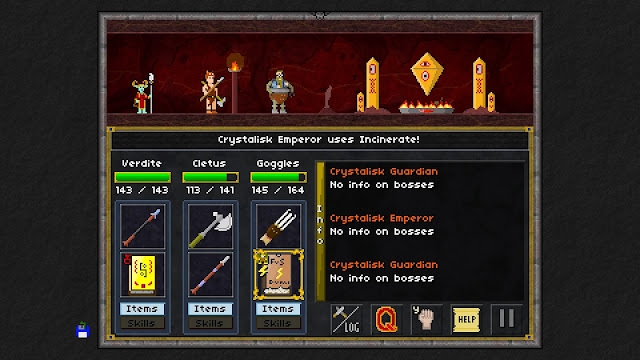 That’s about the gist of Pixel Heroes though it’s very easy to spend hours at a time beating dungeons or failing spectacularly before starting over all again. The biggest learning curve to the experience isn’t what characters can do as much as what their opponents can do. Each enemy has different skills and resistances making for some rather hard encounters if your equipment setup isn’t right or if the person that could have defeated them easily has already died. It is possible to finish a dungeon with less than a full party (and there are trophies for those) it’s just harder to pull off and with the three random encounters left to head back to town. Walking away is often the best solution before having to revisit that graveyard once again.

Pixel Heroes is some good old classic dungeon crawling action. The lack of narrative context makes it a tough, but not necessarily rewarding game, but putting that aside, the endless gameplay loop is simple and clean, and there’s a fun combat system to make it all worth at least a little of your time.