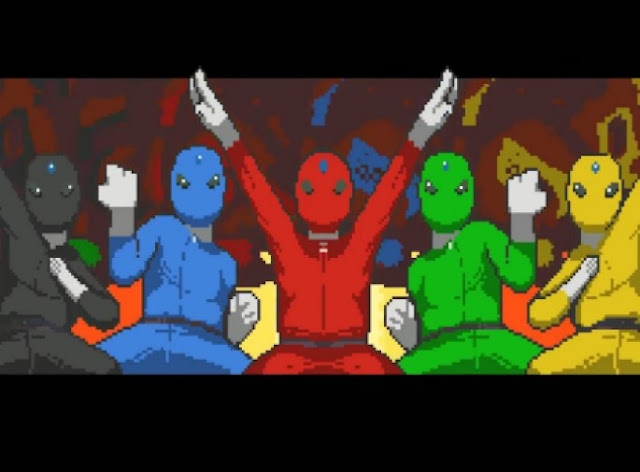 Anyone who grew up in the 90’s will surely remember Power Rangers. I know I loved it when I was a kid. I owned action figures, clothes, VHS tapes, and, of course, the video games. I was a huge fan. Back then I was too young to realise that it was based off from a Japanese franchise called Super Sentai. Power Rangers even used footage from the Super Sentai shows for many of its scenes. What does this all have to do with Chroma Squad? Well in Chroma Squad you start your own Sentai show!

Five stunt actors are tired of the way their director bosses them around and so they decide to quit and make their own show. You will pick from a set of characters and what roles you want them to be in. Each character has his or her own strengths and weaknesses in stats, one might do more damage but have less health and the like. Once you pick the five actors you want you can then pick what colors you want them to wear. Then you will name your studio and then the fun begins.

Even though the game is a tactical RPG there are some simulation aspects at play. You will have to keep fans happy by recording good episodes and having fans also nets you cash. With the cash you can buy new armor and weapons for the team you can also craft new things and use the in-game money to buy packs of crafting materials. You will also be able to upgrade your studio with the money. There are a few upgrades to pick from each helping in one way or another such as making shop prices cheaper or giving your team more HP. For marketing, you will need to pay per one episode or pay a discounted price for three episodes. After paying you can use the fans you have gained to boost something. There is more than one marketing company to pick from each one costing different amounts of cash and needing more or fewer fans to activate a bonus. 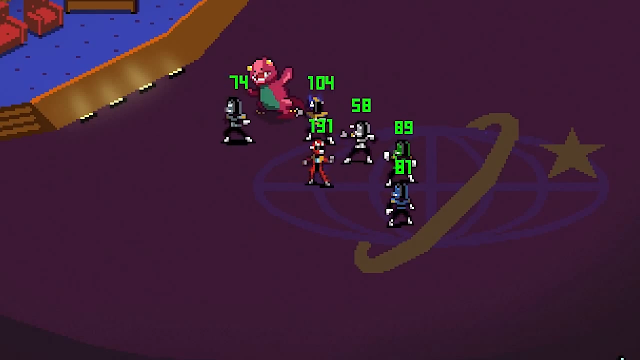 The gameplay is much like any tactics RPG out there but there are some special moves your squad can use. Having more than one squad member next to an enemy and having them use teamwork will allow you to do a team attack. The more allies near an enemy the more damage that will be done. Having all of the squad next to an enemy will let you use a finishing move. But it’s best to wait to use the finishing move for bosses low on HP, as using it too early will lose you fans. Using teamwork will also allow you to use aerobatics to move a character more spaces. Most battles will start with you not chromatized (Power Rangers fans, think “morphing”). Just like in the shows, though, once you fight a little you will be able to chromatize. Chromatizing restores your health and allows you to use your skills. This adds to some of the strategy to the game’s battle system and I liked it.

There are also mecha battles but these are not done in the normal tactics way. In these battles, you pick to attack, defend, or use a skill. Attacking brings a bar up on the bottom of the screen where you must hit square when it lines up in one of two spots. One will do a normal attack while the smaller area will make the attack stronger. If you hit right you will continue your turn and can pick one of the options again. Defending also has its own mini-game where you must hit square when a shield overlaps another to take less damage. I felt these battles were a weak point of the game as they are way too easy and not particularly engaging mini-games in the first place.

Every season of the show will let you activate a new skill for each member of the squad, and there’s plenty of them to choose between. Each will have between one and three new skills to pick from each season. During an episode, you will also be given director instructions for things that you may do for a boost in the fan numbers. These optional extra tasks add a decent challenge to some battles but the balance for them is out, as it’s too easy to end up losing fans overall without completing them, and lose too many and it’s game over. So those objectives are not quite as optional as they’re presented. 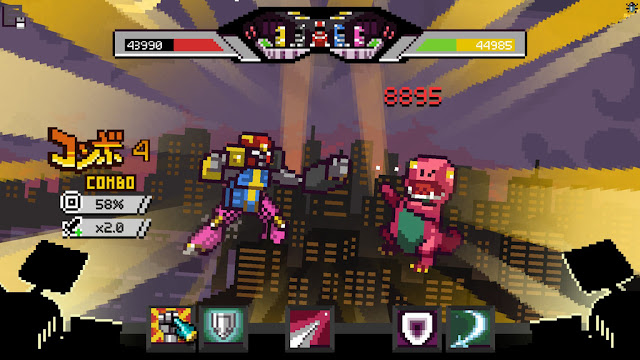 The story is in the same spirit of fun that attracts people to Sentai shows, featuring deliberately bad translations and so on. It’s a good break from all the serious RPGs coming out these days. It is also shorter than most big RPGs, and took me around 13 hours for one play through. There is replay value though, with alternate endings and some choices to make along the way. If you want to experience all the endings you will have to play through the game multiple times.

Chroma Squad is a fun little RPG that doesn’t take itself too seriously and is happy to be silly nonsense. It’s not the most lasting of games, and some glitches to wear the experience down, but I think Behold Studios could really turn a sequel into something special – and I hope they do!