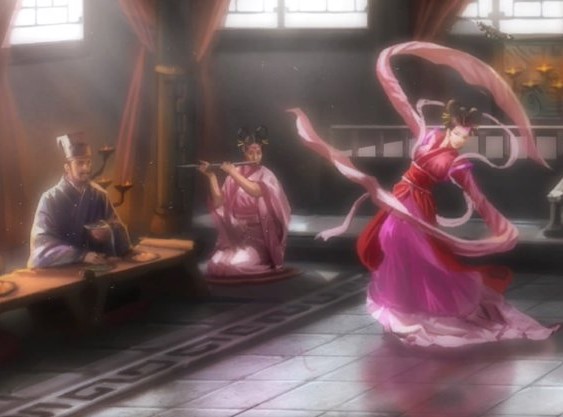 Romance of the Three Kingdoms XIII is one of my favourite strategy games ever. On the PlayStation 4, it plays beautifully (proving that even the most complex strategy games can work using a game controller), looks beautiful, and has incredible strategic depth.

Related reading: Matt’s in-depth review of the original release of Romance of the Three Kingdoms XIII.

The Fame & Strategy Expansion Pack for Romance of the Three Kingdoms XIII adds even more depth to the game’s systems, and brings the game to the Xbox One for the first time as well. If you missed the original release of Romance of the Three Kingdoms XIII, then this is obviously the way to go, and I do think that diehards will also find enough of worth in the expansion as well to justify the purchase.

Romance of the Three Kingdoms XIII was a surprisingly narrative-driven strategy game. There was always a heavy emphasis on events, character-to-character relationships, and generally the downtime between battles as warlords play politics and slowly build their strength up for the next battle. The expansion adds even more to this with the introduction of a “fame” system, which rewards a player with prestige as they complete major actions, and can unlock additional actions for them as they grow in stature. 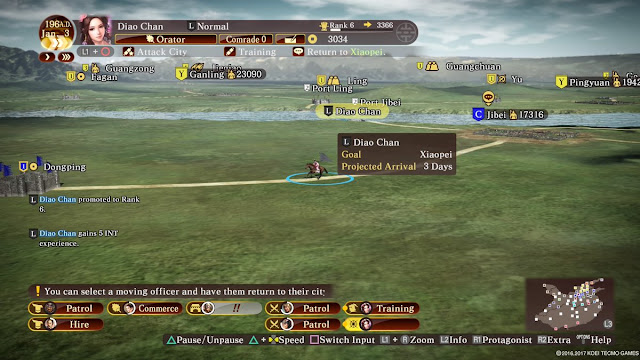 I wasn’t sure how such a system would work in being integrated into the base game. Adding entire systems to strategy games has the real potential to unbalance the experience, but fame works really well in Romance of the Three Kingdoms.

A number of new base scenarios have been added to the game as well. Naturally I decided to play a scenario early on in the Three Kingdoms era that would allow me to play as Diaochan; the fictional heroine from Romance of the Three Kingdoms (the book), who seduced the almighty Lu Bu and convinced him to assassinate a particularly nasty tyrant, before breaking out and establishing his own, very temporary, kingdom. Lu Bu’s great problem was that he was a touch psychopathic and rather temperamental, making him a horrible ally and rather isolated and easy to put down as a result.

Thankfully for Lu Bu in this game, he had me. Diaochan starts the scenario as a low-level officer, but by suggesting domestic projects (building up farms and commerce) and executing them well, I quickly found myself as the governor of a small city on the fringes of Lu Bu’s fledgling empire. Now, history would say that from here Lu Bu’s love of conflict would make most of China united in their desire to crush him, but I set about fixing that. I was able to build a robust army in my frontier city, which meant it could behave as a bulwark against the massive forces of Cao Cao and the bulk of Lu Bu’s seven (at this stage) city nation. 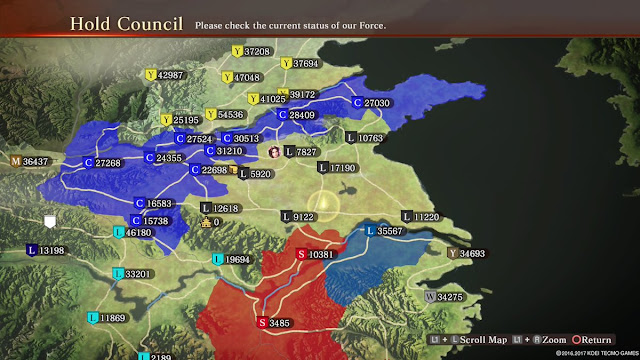 I had one particularly good general working for my city too, and I would often be required to send him and some thousands of troops to shore up the defences of one of the other cities. Lu Bu liked attacking cities, see, which left many of them undermanned from counterattacks. I was always being told that I needed to send forces to assist in the attacks, but I ignored those mandates. I knew what I needed to do for a nation ruled by Lu Bu.

At a point it finally became time to expand, and slowly, very slowly, we were able to grow the empire, with me playing very cautiously and compensating for Lu Bu’s more reckless behaviour. And then I did something silly by declaring independence, which gave Diaochan her own empire, for about two minutes before she was crushed.

Romance of the Three Kingdoms XIII isn’t for the impatient. It’s not a game that’s about battlefield strategy at all, really; you can participate in the battles and personally lead units around, but I actually opt out of that, as the results are generally much the same as if you simulate them. What Romance is really about is that epic, empire-building narrative. Systems, such as the fame system, which contribute to the storytelling only help boost the game’s credentials further. 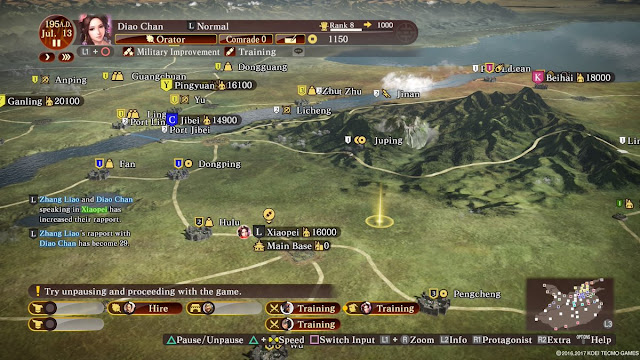 Related reading: For an example of what Romance of the Three Kingdoms used to be, there’s one of the SNES titles on the Wii U Virtual Console. Matt’s review.

The other huge addition in Fame & Strategy is the inclusion of a scenario editor, which is fairly comprehensive. This allows players to set down events and outcomes, and set up fantastic conflicts of their own. As a history buff, this mode isn’t really for me; thanks to the expansion there are more historical scenarios to play through than I’ll likely ever do, as each scenario is a real time killer, but I know that others will really appreciate this feature.

It’s the eye for historical detail that has always made Romance of the Three Kingdoms games so compelling. Like it shows with the Dynasty Warriors series, Koei really knows – and respects – ancient Chinese history, and while the Fame & Strategy expansion pack makes the base game even more strategically complex, the stories that the game tells, even when you’ll be spending most of the game looking at a beautiful, but dry, map, makes this also one of the most accessible 4X strategy games ever created.

Japanese history: On Ieyasu Tokugawa, the patient one