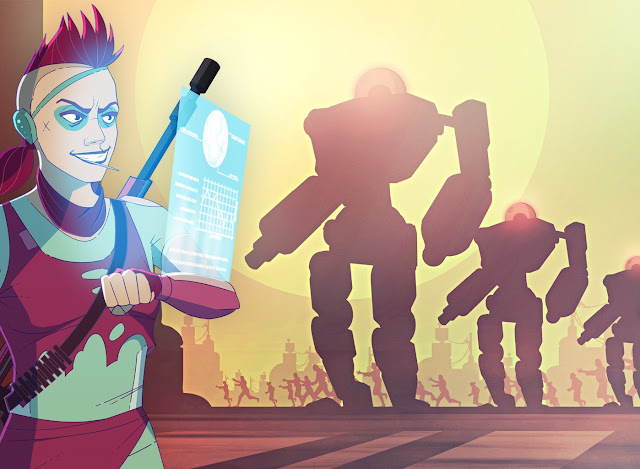 By early 2017, cooks all over the world are familiar with the mandatory ingredients for baking good mobile games. The key ingredient is a simple yet addictive gaming mechanic. Consider the classic example of matching three or more similar tiles in games such as Bejeweled. The App Store is full of games garnished with mobile friendly mechanics, though. It takes a chef to come up with a dish that stands above the rest, that extra spicing of magic mushroom depth that convinces us our lives will not be the same unless we gave that game a go. And perhaps another go.

Ticket to Earth, an iOS game made in Melbourne (a city whose great coffee and foul weather I share), was definitely made with chef grade aspirations. At its core it features a new variation of the tile colour matching scheme that still holds addictive potential. And because that is not enough anymore, it adds RPG elements into the mix, such as ability and weapon upgrades purchased through in game currency. Currency that, it’s important to add, is earned through beating levels and completing challenges (but not by spending money on dreaded in-app purchases!). The icing on the cake, however, is provided by the distinct political message Ticket to Earth is pushing. Yes, you read that right: Ticket to Earth is a mobile game with a political agenda.

The game’s icon, featuring a female character, provides some advance warning. Even before the story exposes us to the fact that particular female character is the one we start the game as, we are introduced to a story depicting the Rinehart Corporation as a [potential] villain in this game. Now, for the sake of non-Aussie readers, I will briefly explain one of Australia’s real life citizens in Gina Rinehart. Rinehart is the owner of a mining conglomerate, is the richest person in Australia, and one of the richest women in the world. She uses that money well, too, and has plenty of politicians on speed dial. She also has a history of – how shall I put it? – fighting to improve her cost competitiveness using all the means available to a billionaire (that’s putting it very diplomatically – ed). But I am getting ahead of myself. Let’s have a look at the actual game. Like Puzzle Quest before it, Ticket to Earth is an RPG hybrid where matching the tiles on a grid gains its protagonist attack powers. The slight yet important difference is that Ticket to Earth’s hero actually walks over the matched tiles. This implies it is not only the tile matching itself that is important, but also the positioning of the hero at its conclusion. The more tiles you can match, the stronger your follow up attack can be. At the same time, your enemies use the same mechanics to fight you back. Every go of yours is made of two rounds, so you can choose to move and attack, move and use a special capability, etc.

Levels are short and affairs are fairly simple to grasp, leading towards a very mobile friendly gaming experience. Throw in a vividly colourful presentation of a fairly unique style and your package is complete.

And then there is the story, presented PowerPoint slideshow style with extra PowerPoint slideshow bonuses on the side. These tell you a story of people stranded on a planet who find themselves exploited (and worse) by the powers that be (hi, Gina). On top of that, the local government and the media tell the public, nicely, to do as they are told so as to get themselves politely exploited. 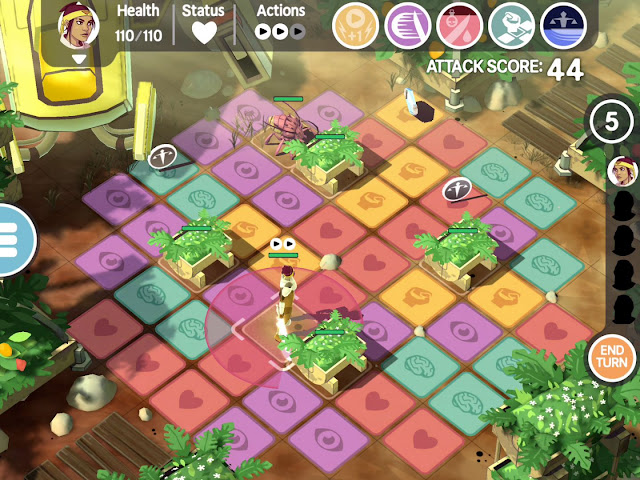 Ticket to Earth is not a book by Sartre. One need not spend too much time assessing it in depth. However, the player is clearly not going to suffer the dreaded death by PowerPoint; the theme of the rich and powerful exploiting everybody else creates enough interest (and, sadly, relevance) to lift Ticket to Earth into more than just another tile based mobile game. It even meant yours noobishly had no problems whatsoever going through the grind required to upgrade my character to a level I could actually make progress with. I needed to know what’s going to happen!

Ticket to Earth is currently presented as “Episode 1”. I have no idea what the future holds, be that a sequel or DLC or whatever, but I do know that as we stand it is one of the better classic mobile games released this year.