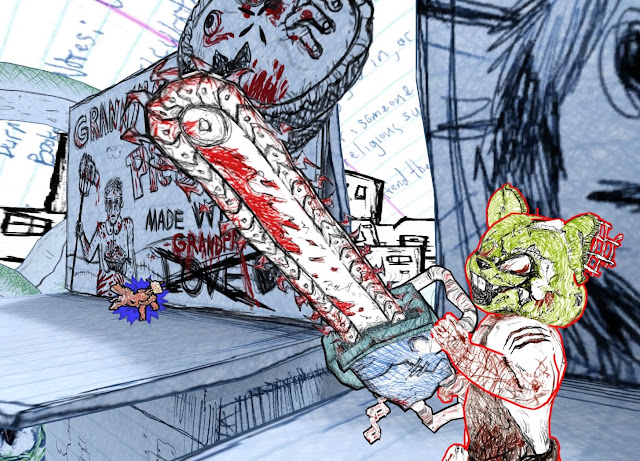 Of the many genres of art out there, transgressive art is my favourite beat. It was the main topic that I studied back at university, and I’ve seen, read, or experienced it all: Antonin Artaud, Marquis De Sade, Stelarc, Michel Foucault and Georges Bataille. From the Dadaists through to the modern transgressives, I’ve seen the most provocative and mesmerising art out there, and in that context I say this: David Jaffe’s Drawn to Death is a pathetic attempt to be part of the transgressive tradition.

Related reading: For an example on how you can do brutal, violent, visceral, transgressive art right, Goichi Suda’s Let if DIE is spot-on. Matt’s review.

This is a game that revels in how utterly crass it all is. Whether it’s the tutorial in which an anthropomorphic frog hurls abuse at you (the frog, no doubt, chosen as a reference to a certain abusive movement that made a frog its own mascot), or your ability to send crass memes to opponents through matches, the gutter speak that each character indulges in, or the red paint that splatters the paper-style aesthetics once combat is joined – this game is right up there with the most senselessly crass art you’ll ever see. On a technical level, it’s pulled together well enough; the characters do look very distinctive, and the hand-drawn pen-on-paper aesthetic is executed believably. But the whole thing is such a vicious attack on the eyeballs – let alone the eardrums – that “entertaining” isn’t really the right word for it.

And that would be fine if the game made a point with anything it’s doing. I’m all about games (and art) as (intellectually) challenging experiences as opposed to passive entertainment. But Drawn to Death isn’t challenging in the slightest. Beneath the game’s trying-too-hard teenage-style anger and extreme violence is a perfectly competent, but utterly generic, empty, and purposeless, third-person shooter. Players duke it out through small arenas, collecting weapon power-ups that are scattered about the place and then trying to blow holes out of the opponent. It all works, but we’ve also seen it all before, just with less abstract art skins.

You know how I’m always on about games as art? I take it back. Games are a failure #PS4share https://t.co/oUaNSrcKFT pic.twitter.com/Tel0d2ymEa

Devoid of any attempt at narrative context as it is, Drawn to Death doesn’t rightfully get to call itself “transgressive,” either. Artists transgress to make a point. It might be political or social, or it might be because the artist wants to explore the nature of the medium itself that they’re working in. The Marquis De Sade’s writings are, on a superficial level, the same kind of sensory brutalisation that Drawn to Death provides, but De Sade wrote with all the revolutionary spirit of the most passionate of French agitators of his time, and his work tore at the political establishment and religious corruption. It wasn’t senseless; quite the opposite, De Sade’s work (as latter picked up by philosophers such as Georges Bataille and Michel Foucault) was thematically potent and deeply, rationally, political.

Antonin Artaud, meanwhile, pulled at the threads that bound theatre as a medium. His seminal work, A Jet Of Blood, is, again, a brutal thing to see attempted on stage (and I write “attempted” because the jury’s out on whether it’s even possible to actually produce this one in the real world), but looking beyond the obvious, and looking at why Artaud wrote it, it becomes clear that he was exploring the assumptions people had about how theatre worked, and the purpose for it even existing. He was transgressing in order to help us all understand theatre.

Even South Park, which is utterly crass and quite explicitly aims for the lowest common denominator, is a genuine work of transgressive art, as it generally asks some pretty hard socio-cultural questions beneath that base humour. Or, at least the early show did. I stopped watching South Park a very long time ago, so I’m not sure where the show has gone since. The point is; transgressive art doesn’t need to be high and lofty in intent. Stuff like South Park show that gutter trash can work as transgressive art, and be remarkably effective at it. 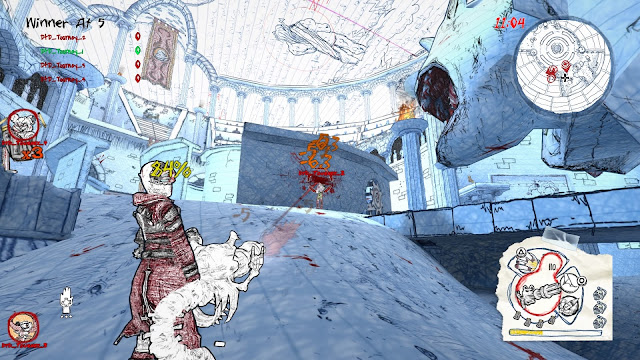 Drawn to Death is gutter trash, but it fails to be transgressive on any genuine level. It pushes no real boundaries; that striking art style is merely a skin and the game does nothing creative with it. It’s offensive for the sake of being offensive, and, again, fails to use that offensive content to make a point. The game certainly makes no attempt to become metatextual and ask questions about game design or gameplay; it’s quite happy conforming to every genre convention there is. So, even though it executes the action quite smoothly, we’ve seen everything this game does better elsewhere, leaving the action to feel hollow and painfully like a grind over the longer term. Or to put it in simple terms; most people will go back to whatever shooter actually provides long term value once they’re done messing around with this for a short period of time.

Because Drawn to Death appropriates a transgressive ethos without actually transgressing anything, it doesn’t take long for the game to feel more like the antithesis of the punk attitude it so badly wants us to buy into. In other words, it feels like a game made by a bunch of middle-aged men who prefer to talk about games as “content” rather than works of art, who are trying to manicure something that will be popular for a carefully researched target demographic, instead of making a game because they’ve got something to say, which is how actual transgressive artists think.

The context of Drawn to Death is that some incredibly bored teenager thinking up sadistic battle scenarios and doodling them into his notebook to while away a particularly dull class lesson. Perhaps this was Jaffe referencing his own childhood. If so, this game is perhaps the best reason to encourage children at school to pay attention to their teachers. If kids don’t tune out and learn things, then a game like Drawn to Death may blessedly never happen again. 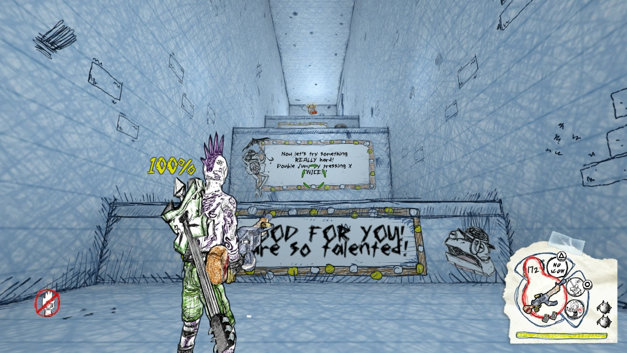 It’s probably just as well Sony gave this thing away for free with PSPlus memberships. It’s the only hope the game has of actually keeping an audience (because it’s a multiplayer-only game, it needs a large and sustained community). But if David Jaffe genuinely wants to make a transgressive game, next time he should pay some attention to how actual transgressive artists like Goichi Suda and Yoko Taro do it.