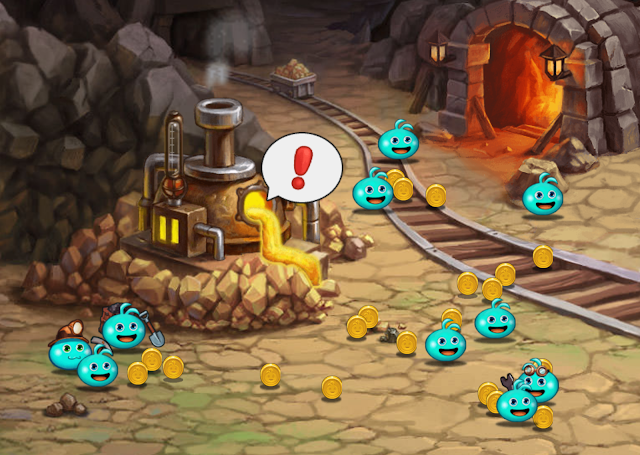 Of the different factors that go into the design of a game, its business model is probably one of the least appreciated ones. That is to say, despite us not really caring what ingenious trick a game is trying to pull on us in order to come between us and the contents of our wallets, the developer’s specific choice will have significant impact on the game itself.

Most of the video games we engage with require us to pay in advance in order to enjoy the experience. Sure, we might be asked to make further payments in order to put our hands on that most exciting DLC ever, but generally speaking the onus is on us to make sure we make the right choice when we pick the game up. The mobile arena is different, though, in that saturation has spoiled us so badly it is almost mandatory for a game to be free in order to penetrate the market. Free or not, the developer still needs to bring bread home; the question is how. Usually, the entire freemium game is engineered in a such a way so as to require the player to pay, one way or another (not always in the form of direct cash; consider how you pay Facebook for its services). In other words, the game has to be compromised by design if it is to still earn money.

You can blame the App Store and the gaming economy it brought us as much as you want. What matters is that whenever I approach a “free with in app purchases” game, the question I find myself asking is: just how bad is it going to be? Perhaps I’m overthinking it. After all, some freemium games – I’m thinking World of Tanks Blitz and Fire Emblem Heroes – are amongst my all time favourites. 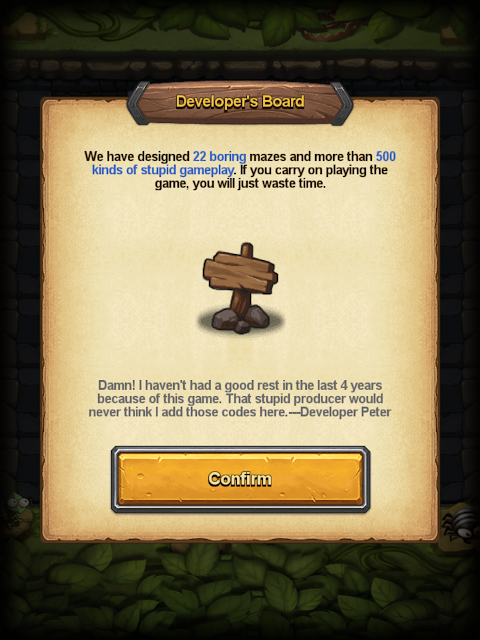 Into this turbulent state of mind stepped Gumballs & Dungeons (G&D), a free to play with in app purchases dungeon crawler of a game for iOS and Android.

G&D has you playing as… a gumball. According to the dictionary, that means “a brightly coloured ball of sugar coated chewing gum”; I would say you’re playing as a ball with a face. Which is perfectly fine! Our society glorifies members that happen to be good with their balls. G&D’s is made of similar stuff, with weapons and magic at its side, which you can upgrade by mining coins, that get you better machines, that get you more coins, that you can buy skills with. With those skills you will then go into dungeons, loot them to the best of your abilities, then come back to use your loot for further upskilling and bigger, better, faster gumballs. Loot enough and you shall have the technology.

It is the dungeons where the dungeon crawler part of the game takes place [duh]. You play by uncovering treasures as well as monsters through clicking on the grid that is the dungeon’s top map view. The first click exposes the contents of the grid’s cell, the second “activates” it: fighting a monster, picking up an item, etc. 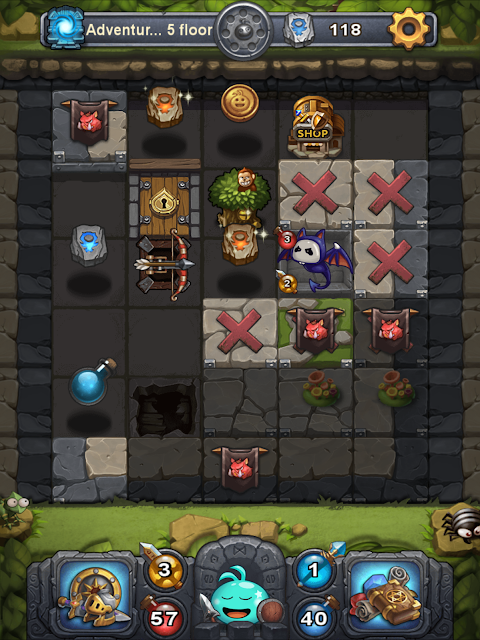 If there is skill to the fighting, it is more about holding yourself back from constantly tapping so as to avoid tapping on the more threatening monsters you uncover. Instead, you need to optimise the order of your taps. Thus you can set bees upon your enemies instead of fighting them yourself and risk poisoning, or you can expose crossbows that allow your gumball to avoid a monster’s retribution. From time to time you will also expose messages from the developers that break the fourth wall. Then there is the occasional popular culture reference, such as Smurfs (I’d say G&D stretches the concept of copyright fair use, but then again why should we care).

Personally, I found the experience of playing G&D rather tedious and unrewarding. There wasn’t enough challenge in the gameplay to make me feel like I was making a difference, and there wasn’t much in the way of personal attachment between my gumball & I to make me care.

Flow is another weak point. The tutorial alone can be a big turn off, with its seemingly endless hits of text. Then there is the matter of G&D being an online only affair, which to me meant no train play. On the positive side, I found the game to do quite well on the online delay spectrum: it is definitely not the exhausting experience Pokemon Duel was. Plus, as an added bonus, it will always remember exactly where you left off. 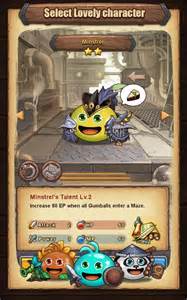 There is no doubt regarding G&D’s freemium nature, with regular badgering for the player to establish some sort of an account as well as notifications that inform you about important things such as “The offline benefit duration is over,collect [sic] now!”. Yes, you will stumble upon the occasional grammar error and other indicators of a game that is lacking the finishing touch. As for the key question I started out with, on how G&D manages with its financial model, the answer is on the favourable side. I never felt the need to spend money in order to progress. Is that a positive? Only to a point, because the developers do need to make money somehow if they are to continue supporting the game. It does mean, however, that G&D is a game with no entry barriers that anyone can have a go at any time they have themselves an Internet connected mobile device at hand. That is to say, whenever we are awake.

Ultimately, though, the role of G&D as a game is that of a time waster. That is the purpose of all that clicking and coin fetish, after all. To me, as someone who never has enough time to do the things I want, that is perhaps the biggest insult possible. G&D made me wonder what my purpose in gaming is, and when I answered that I want to expose myself to new experiences and learn about the world I got all the perspective I needed about gumballs.

If escapism and innocent clicking is an activity you would like to practice, then G&D could easily fit into your life. Mine is too short to waste in such a way, though. Not with so many great games out there, and not with the role I consider games to hold in my life.