It’s hard to find someone who doesn’t love the sheer entertainment value of a Musou game. There’s a reason why there’s so many of them; the people just can’t get enough! With that in mind, the geniuses at Koei Tecmo have announced that Musou Stars is receiving a Western release as Warriors All-Stars on August 29 this year.

As the name suggests, we’re going to get to play as some of the most beloved characters from Koei Tecmo’s games. Kasumi, Honoka, Ii Naotara, and Marie Rose are just a drop in the ocean of the character pool that Warriors All-Stars is going to have, but you can guarantee that they’re going to make one hell of a splash with the Soft Engine. That’s right: the girls of Warriors All-Stars are going to get a little extra bounce with each kick, slash, and punch. Judging from the bountiful bevy of babes that we’re going to have access to, this is one offering from Tecmo that’s going to keep on giving.

Warriors All-Stars will be released for PC (via Steam) and PlayStation 4; physical preorder bonuses include a plethora of bonus costumes. The game is set in a land on the brink of destruction — aren’t they all? — and champions must battle to earn the title of the land’s new ruler and hopeful saviour. We’re rooting for Sophie (yes, Gust’s Atelie Sophie makes an appearance!) but any of these lovely ladies would make for exceptional royalty.

The Professor Layton series of puzzle adventure games has sold more than 15.5 million units worldwide to date in the decade since the first game (the Curious Village) launched. Fans can now heave a sigh of relief at the news that the latest official sequel is coming West. In the transition from Japanese to English, the title has been changed from “Lady Layton: The Millionaire Ariadone’s Conspiracy” to “Layton’s Mystery Journey: Katrielle and The Millionaire’s Conspiracy”. Neither can be said to trip off the tongue with ease; but I rather fancied the “Lady Layton” moniker with its charming note. Here is a lovely, long trailer from last year to spark your memory:

Level-5 have announced that the new title will release for the 3DS in Japan, and iOS and Android worldwide on July 20. The mobile versions will have in-app purchases, but these are not required to complete the game. A range of languages is supported: Japanese, English, French, Italian, German, Spanish, Dutch, and Korean. Since the press release states that the 3DS edition will launch “in Japan first,” we read this to mean that a Western 3DS release is planned.

For the story, the generational baton will pass from Professor Hershel Layton to his daughter Katrielle (Kat) Layton. Kat (voiced by Kasumi Arimura) started working as a detective to solve her father’s disappearance, but is taking on other cases while the search for her father has hit a wall. She is ably assisted by her talking dog Sharo and a part-time helper, Noah. Her adversary is a high-profile analyst who sees Kat with her unorthodox methods as a rival. As you can tell from this story outline, the emphasis in this game is more on solving multiple mystery cases in London, bringing with it a reorientation for the series puzzle elements as well as a faster tempo.

We have a launch date for Dark Rose Valkyrie!

The Spring Allergy gods heard my wailing and sneezing on April 10 and abracadabra! — we have a release date for Dark Rose Valkyrie: June 6 in North America and June 9 in Europe. Idea Factory International is making the game available both physically and digitally. Players are put in the role of the leader of an elite military force known as ACID (Anti-Chimera Interception Division) to stand between humanity and those transformed by a mysterious virus. 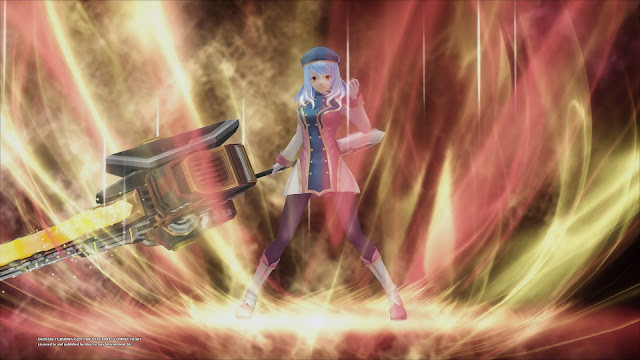 What makes Dark Rose Valkyrie stand out from other CompileHeart games is that they were able to co-opt “Tales of” series scenario writer Takumi Miyajima and character designer Kosuke Fujishima. It was a steep task to translate Kosuke Fujishima’s gorgeous character artwork into 3D models. This is a new IP for CompileHeart and Idea Factory, and they are taking care to polish the game so the many features of gameplay will shine and attract RPG fans. One interesting visual novel-type theme (think Danganronpa and also Lost Dimension) is the regular interrogation of teammates to isolate those affected by the virus. On top of that, interrogations will also lead to unmasking a traitor in your midst; the traitor will depend on the choices you made and affect the ending accordingly.

Not only do we have the theme of betrayal, but also that of split personality. Add to the mix a turn-based battle system (yay!) and the beautiful character design by Mr. Fujishima, and I can honestly say that this is a CompileHeart title that has me intrigued more than usual. There will be multiple difficulty settings and the player can adjust pacing by skipping certain features and shortening loading times. Could this new IP turn into a franchise? Director Kenta Sugano seemed hopeful when he commented in an interview: “…but if there is enough support from the fans for this game, we might see it develop into something larger in the future!”

The announcement of a new horror game for PlayStation 4 and PS Vita would normally not raise my heart rate, but it sure skipped a beat when I saw that Ryukishi07 — the extraordinary mind behind visual “sound novel” Higurashi When They Cry — is behind this Nippon Ichi port of the 2016 PC title Iwaihime: Matsuri.

“Crush evil, spread the truth” is the tagline for the visual novel. The story’s theme seems to revolve around a curse. The first-person protagonist, a boy from the Susuharai family, has transferred to a prefectoral high school in his second year in order to begin an independent path leading to adulthood. Everything is going well for him; except, there is Toe Kurokami. She seems strange: always holding that traditional doll tight against her chest. Of course there are whispered rumours that the doll is cursed. Our hero feels that meeting this girl was, somehow, fate. Fate? What fate? Oh no… no more details at this stage — sorry!

The character design is by Kazuharu Kina, an artist who likes to capture (in his own words) “the aura that young girls possess”. His artwork certainly portrays an innocent charm, imbued with unspoken possibilities. Iwaihime: Matsuri will launch for PlayStation 4 and PS Vita in Japan on July 20. The port also adds new scenarios. At this time, there is no word whether the game will come West. But in the interest of everybody’s heart rate, we sincerely hope it will.

The DDNet Debate: On music and soundtracks; what works, what we love, and what we don’t