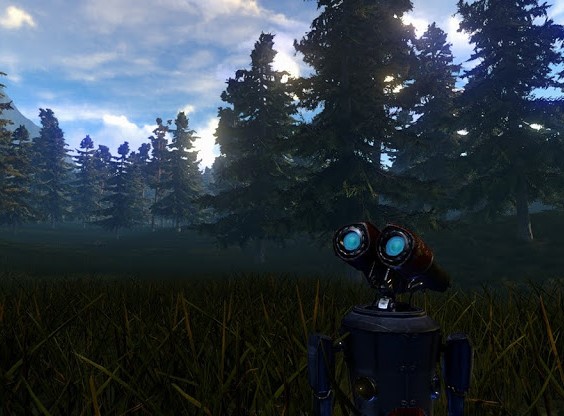 At first glance, Phoning Home promises a sweet story and a vast, unusual landscape. However, the promised scope of the game combined with several familiar narrative, visual, and gameplay elements were cause for concern before even beginning. Can an indie developer successfully create a game experience that even large, established companies struggle with at times?

Phoning Home has a story best described as E.T. + Wall-E. A small robot’s resource exploration mission goes haywire when its spaceship crashes onto an alien planet. With its vehicle destroyed, the robot — ION — is left to fend for itself while trying too find a way to contact its home planet; a.k.a., “E.T. phone home.” While exploring the planet ION meets a stranded service robot named ANI; a.k.a. Wall-E and EVE 2.0.

Unfortunately, with such strong semblances to two iconic films, Phoning Home immediately sets itself up for failure; the title alone makes me hear “E… T… phone… hooooome.” The good news is that I didn’t much like E.T. (sue me). Wall-E, however, is in my top three Pixar films of all time — in large part due to Wall-E’s relationship with EVE. ION’s relationship with ANI seems shallow in comparison. 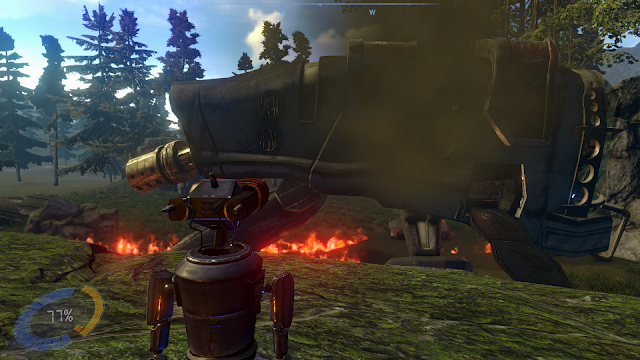 Don’t get me wrong: the narrative isn’t by any means poor. It just isn’t original enough to stand on its own as reason to recommend Phoning Home. I did find myself connecting to the robots despite their alien nature, but I soon found the story is also bogged down by ANI’s general uselessness — I would rather hear my spaceship tell jokes than use any of my precious fuel on her.

ION can move somewhat infinitely in any direction except up. Going up requires fuel. And ION never seems to have enough fuel to actually get up even a single jump that lasts longer than mere milliseconds. This frustrating realization is unfortunately part of a much larger issue at hand: Phoning Home is broken at a fundamental level.

I don’t have the best PC in the world, I admit — I’m more of a console girl — but its specifications certainly surpass the minimum recommended by the developer on the game’s Steam page. Regardless, the instant the game begins, so begins the lag that will destroy the game’s chances of ever being truly enjoyed.

Just to be clear, I will never use a few bugs in a game as reason to rate it poorly. Things happen, and developers are often squashing bugs as quickly as they can. Phoning Home has even had some updates since being released, however the game-destroying never-ending lag remains an issue. When it began, I did all I could: changed all settings to the lowest possible options, checked for a game update, rebooted my PC. Now the graphics weren’t nearly as nice and ION’s movements were sometimes jagged, mountains would appear and re-appear as I got close, and areas across reasonable jumps remain unexplored.

Despite the technical issues, Phoning Home does show a spark of something special. It combines the familiar (story, characters, open-world survival gameplay) with some truly stunning settings. The planet is earth-like yet foreign, with large rock formations, vast deserts, lush forests, and snow that will nearly give you a chill as it blows across the terrain.

The planet isn’t just beauty, as it is also ION’s resource for all things needed for crafting. As with most open-world survival games, you are able to take resources from the land (for example, fungi) to create something useful when the ingredient are properly combined (ie. fuel). There aren’t an overwhelming number of crafting options available, but you are able to create enough to keep both ION and ANI safe… and perhaps discover how to restore the technology of a past civilization. 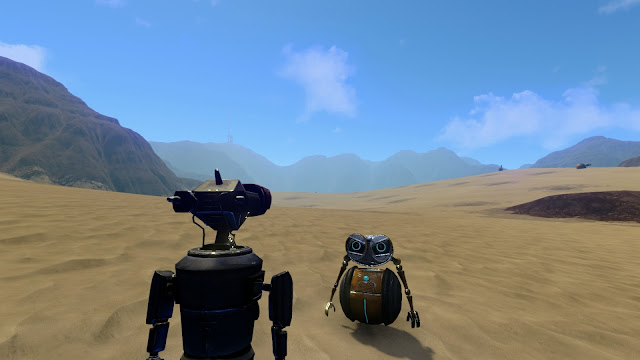 The duality between nature and technology, the conscious and the unconscious, is an interesting one. ION is clearly advanced to a degree, and can understand speech and think for himself. The same can be said for ANI. The robots seem foreign amongst expansive landscapes with little to no sign of any other civilization, yet are able to take what they know (and are told, thanks to ION’s handy downed spacecraft) to create technology. Phoning Home often plays with these themes of duality; other examples include respecting the past while forging ahead, and putting your needs first versus helping others.

Related reading: For an open-world survival game with a weird twist, check out We Happy Few, currently in Preview on Xbox One.

I really wanted to like Phoning Home. The concept is familiar, with a small robot crash-landing onto a planet and having to find a way to phone home. The look is familiar. The robot is even familiar. There’s nothing new about the open-world survival gameplay. And with all that familiarity, the game better be done right…. but it is undeniably flawed. If one can persevere through the issues, Phoning Home is a good example of an open-world survival game’s ability to incorporate narrative themes into its gameplay.

On the Nintendo Switch for gamers with disabilities; plenty of questions still need answering